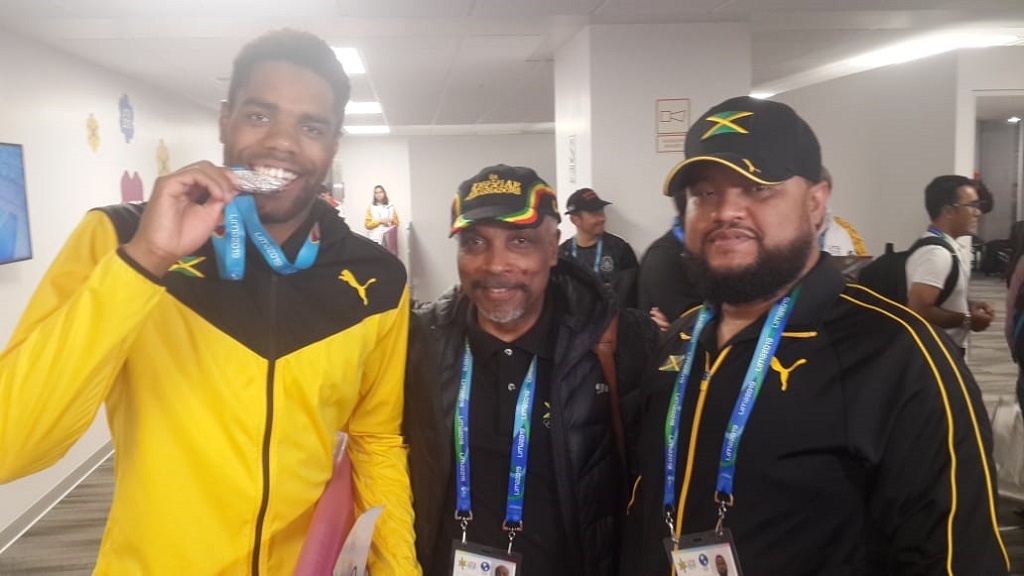 Diver Yona Knight-Wisdom (left) bites on his medal as he celebrates winning a historic silver in the men's 1m springboard competition at the Pan American Games in Lima, Peru, on Thursday, August 1, 2019. It was Jamaica's first ever medal in diving competition at the Pan Am Games. Sharing in the occasion are Christopher Samuda (centre), President, JOA and Ryan Foster, the JOA's CEO/General Secretary.

On the occasion when Jamaica celebrates Emancipation Day, Yona Knight-Wisdom delivered a historic feat to earn a silver medal in the one-metre springboard diving competition at the 2019 Pan American Games in Lima, Peru.

“A great day for it,” tweeted the 24-year-old for Thursday night’s feat, which marked the first time a Jamaican had ever won a medal at the Pan American Games in diving competition.

Knight-Wisdom’s latest accomplishment adds to a number of history-making advances, since becoming the first Jamaican to participate in diving competition at the Olympic Games, in 2016 at the Rio de Janeiro edition in Brazil.

Born in Leeds, United Kingdom, Knight-Wisdom’s father is Jamaican and he had only started representing Jamaica a year earlier, at the FINA World Cup. Having won double gold in his favoured three-springboard and three-metre synchro at the Scottish Nationals in December has been preparing well under new coach Jenny Leeming and had shown that he was on course for something special this year.

On Thursday night in Lima, that promise came to fruition as he tallied 429.90 points to claim second place, finishing behind Mexico’s Juan Manuel Celaya, a 20-year-old Louisiana State University student, who also created history in winning his country’s first gold in diving at the PanAm Games. American Andrew Capobianco won bronze with 411.25 points.

The tall Knight-Wisdom, who stands at six feet, three inches has generally done better in 3m springboard diving due to his height. As such, he was a bit taken aback by his historic achievement.

“Can we just take a minute to appreciate that this used to be my worst dive on 3m. I just scored 81.6 points on it on 1m and someone even gave it a 9. Plus I got 429.90 overall,” Knight Wisdom tweeted. “Someone tell me how that’s possible, please.”

His outstanding effort was commended by the Jamaica Olympic Association (JOA), an affiliation that has afforded him support through the Olympic solidarity programme.

"Tonight we dived into history with Yona, who is deserving of the silver medal which he earned,” said JOA President, Christopher Samuda, “This is what the JOA believes in. Excellence, an indomitable spirit to win, pride in country and love for the sport."

Knight-Wisdom will return to competition for his second event, the men’s 3m springboard diving competition on Saturday.

“Time to reset for the 3m springboard on Saturday,” he said.