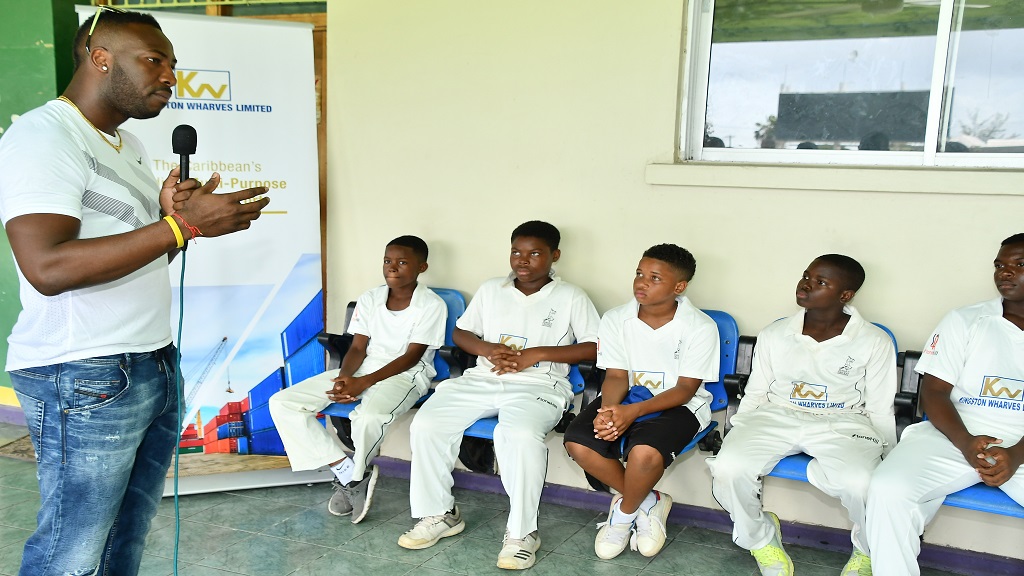 Jamaica and West Indies all-rounder Andre Russell addresses young cricketers just before the quarter-final clash of the Kingston Wharves Under-15 cricket match between Kingston and Melbourne at Emmet Park on Tuesday, August 21, 2019.

Melbourne, Kensington, Manchester, and St Mary will contest the semi-finals of the 2019 Kingston Wharves Under-15 Cricket Competition.

The semi-finalists were decided on Tuesday following the four quarter-final games.

Melbourne defeated Kingston by two wickets in a rain-affected game at Emmet Park in Kingston. The match was reduced from 40 overs to 36 overs.

Batting first after winning the toss, Kingston made 113 for nine from their allotted 36 overs with Ajani Banton top-scoring with 37 runs. Worrel Lindon chipped in with 16.

Ojani Chung was the best bowler for Melbourne with three wickets for 23 runs from seven overs. Kevaundre Virgo (two for 17 from eight overs) and Jevaugney Simpson (two for 24 from seven overs) supported well.

Melbourne replied with 114 for eight to win the match with 26 balls to spare. Opener Kevaundre Virgo led Melbourne to the victory with 67.

Nicoli McKenzie was the most successful bowler for Kingston with four for 22 from eight overs, while Omario Wedderburn supported with two for 21 from six overs.

It was the first defeat for Kingston, which had won all their four preliminary-round games.

Kensington made 195 in 38.3 overs with Davian Davis top-scoring with 68. Tamari Redwood made 22, while Daniel Wright got 21.

Needing 196 for victory, Boys' Town were blown away for 56 against the bowling of Daniel Wright (five for 16 from six overs) and Jario Dewar (two for six from 4.3 overs)

Over at Church Teacher's College in Mandeville, 2017 champions Manchester defeated St Ann by 98 runs in a rain-affected game, which was reduced to 20 overs.  Scores in the game: Manchester 143 for five from 20 overs; St Ann 45 in 17 overs.

Over at Bascobel in St Mary, the host defeated  2016 champions St Elizabeth by 28 runs in another game affected by rain. Scores in that match: St Mary 70 all out, St Elizabeth 42 all out.

A new champion will be crowned as last year's winners Lucas did not progress from the preliminary round.