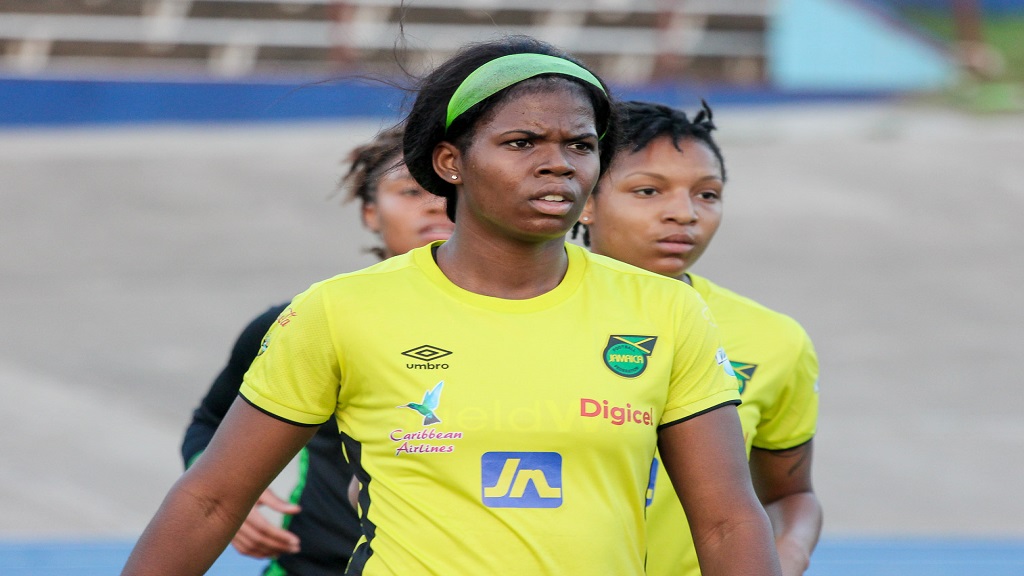 Reggae Girlz striker Khadija Shaw at a training session at the National Stadium on Monday, May 13, 2019. (PHOTO: Lennox Aldred).

She is the face of the Reggae Girlz senior team, and with all that attention Khadija Shaw is trying to remain humble as all eyes will be on her this summer when Jamaica take on the world at the FIFA Women’s World Cup in France.

Shaw, who was last year named the Guardian Footballer of the Year, says she is not about to put added pressure on herself going into football's biggest showpiece.

“I am not trying to please people, I am going to please myself, and once I give it my all, I will be happy with that. If I don’t score but set up a goal, I can be pleased with that as well,” said Shaw at the end of the Reggae Girlz’ first training session on Monday, ahead of their farewell friendly international match against Panama on Sunday at the National Stadium.

The Panama game will be the final one at home before the Reggae Girlz depart for the FIFA Women’s World Cup from June 7 to July 7.

"A lot of people ask me if it's hard, and I say to them everything you do is hard, soccer, in general, is hard, you have to just continue to put in the hard work and good things will come," added Shaw.

The 22-year-old striker has racked up the goals in 2018, scoring 19 times for Jamaica in the qualifiers and 27 goals in 32 games for the University of Tennessee in the NCAA tournament.

Fitness has been a major part of Shaw’s development, and the former St Jago High star has been setting the bar high in the national set-up.

“There is not a lot of time when you come into camp, so it is what you do outside of camp that matters, you got to lift, you have to run so when you come to the camp you are ready,” Shaw said.

“I recently graduated from the University of Tennessee, and while I did my studies I had to get my two hours of work in every day, I want to know that in the 90th minute I still have more left in the tank to take my team home if possible,” she further stated.

The extra effort at training on Monday was a welcome sight for the USA-based head coach Hue Menzies.

“We saw some players stepping up in the fitness aspect of training and it was nice to see the ‘big unit’ (Khadija Shaw) leading from the front and this is the type of example we want from our senior players,” said Menzies.

After the match against Panama, the squad will depart a day later for a short camp in South Florida before flying to the United Kingdom for a friendly against Scotland in Edinburgh on May 28.