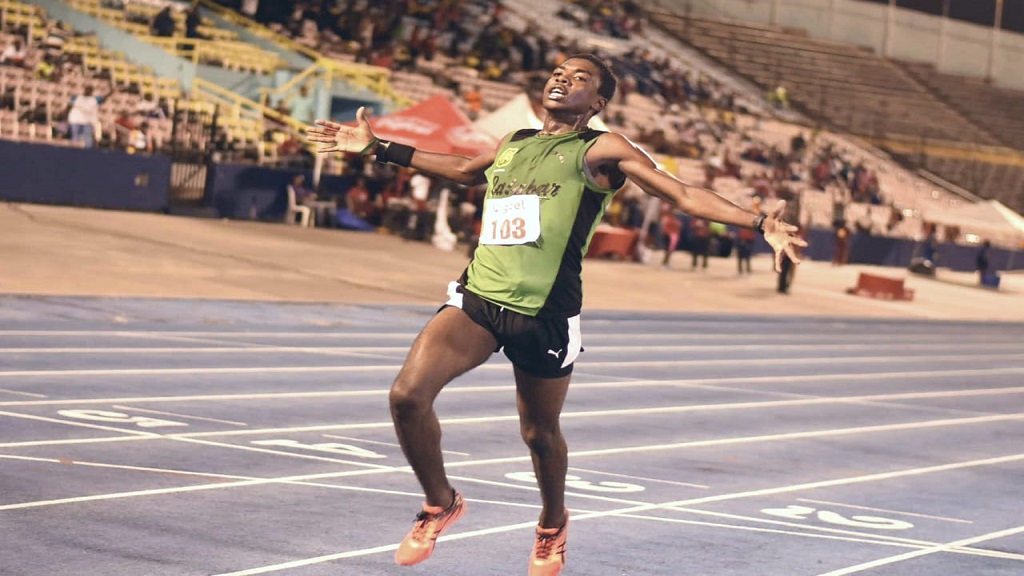 Venson closed the double on the final day of action with an easy victory in the Boys’ 5000m open final. He completed the course in 15:06.75. It was a one-two finish for Calabar High as Rivaldo Marshall came home second in 15:54.32, while Campion College’s Noel Ellis (16:42.73) rounded off the top three.

Venson also won the double at the 2019 Boys and Girls’ Athletics Championships.

Calabar High’s Chadrick Bacchus outclassed the field to capture the Boys’ 3000m open in 9:16.24 to attain the Carifta Games qualifying standard for the event. STETHS’ Marcus Earl (9:45.43) and St Thomas Technical’s Caballaro Walters (9:48.65) finished second and third, respectively, but both failed to achieve the Carifta Games qualifying standard of 9:25.00.

The reigning Carifta Games champion came home in 13.10 seconds but was denied a big personal best because the +3.9 metres per second wind reading was above the +2.0 allowable limit.

Nugent’s personal best is 13.24 seconds and was achieved on her way to the gold medal at the 2019 Carifta Games in the Cayman Islands in April.

There were two other personal best times in the sprint hurdles.

There were also several personal best times in the 400m hurdles.

Shaquena Foote (57.60) of Petersfield High and Garriel White (58.06) of Hydel High both clocked personal best times for first and second, respectively in the Girls’ Under-20 400m hurdles.

Earlier, Antonio Watson of Petersfield High and Shenese Walker of Hydel High won the Boys and Girls’ Under-20 200m titles.

Walker survived a strong and determined fight from Brandy Hall of Edwin Allen High to secure the Girls’ Under-20 200m crown. Walker got the victory in 23.34 seconds, while Hall came home in 23.37. Both athletes are recorded personal best times. The top two were well clear of third-place Joanna Reid of St Jago High who clocked 23.48 seconds.

Edwin Allen High’s Tony-Ann Forbes won the Girls’ Under-17 200m in 23.98, while Crystal Chambers of Rusea’s High was second in 24.09. Both athletes were denied personal best time because the +2.2 metres per second wind reading was above the +2.0 allowable limit. Lavanya Williams of Rusea’s High finished third in 24.25.

The boys’ equivalent was won by Clarendon College’s Richard Nelson in 21.45 seconds but was also denied a personal best time because the wind reading was also above the +2.0 allowable limit. Alicke Cranston (21.61) of St Elizabeth Technical High School (STETHS) and Deshaun Gordon (21.77) of Charlemont High finished second and third, respectively.

There was a one-two finish for St Jago High in the Girls’ Under-20 800m. Sancia Smith won in 2:10.99, while Alesia Douglas finished second in 2:11.03. Both athletes also registered new personal best times.

Calabar High’s Kimar Farquharson easily won the Boys’ Under-20 800m in 1:51.17. JC’s Rushshane Fullerton finished second but was disqualified and placed out of the race. The Kingston College (KC) pair of Giovouni Henry (1:52.75) and Amos Beadle (1:52.77) were promoted to second and third, respectively.

In the field, KC's Akeel Hanchard produced a big throw of 62.72m with his final attempt to easily claim the Boys' Under-20 javelin title, while St Catherine High's Ashley Duffus took the girls' equivalent with 43.94m.

Valecia Williams of Hydel High took the Girls' Under-20 triple jump with an effort of 13.01m, while Apalos Edwards (15.76) of JC won the boys' equivalent.