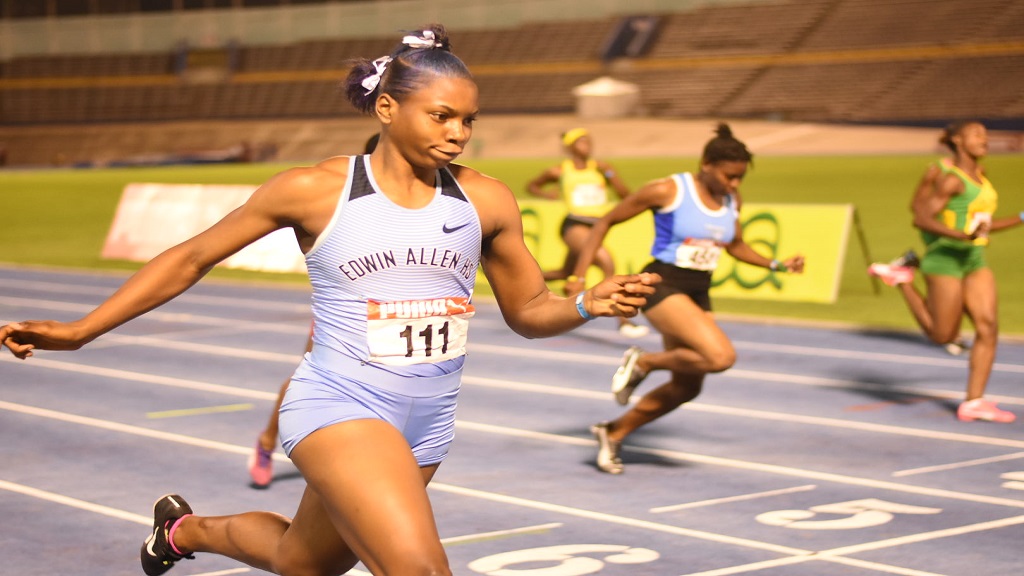 Davis ran a near-perfect race to take victory in 11.46 seconds. It was a comfortable victory for Davis despite running faster on Friday when clocking 11.35 seconds in her heat. Holmwood Technical’s Sashieka Steele (11.55) and Davis’ teammate Brandy Hall(11.59) finished second and third, respectively.

Watkin held his composure following a faulty start to pull off an upset victory in the Boys’ Under-20 100m title in 10.61. Raheim Scott (10.61) of Rusea’s High and Shakur Williams (10.73) of Meadowbrook High finished second and third, respectively.

Sachin Dennis of St Elizabeth Technical High School, who went into the final as the second-fastest qualifier, could only manage fourth place in 10.76, while Oblique Seville of Racers Track Club did not report for the final.

Seville, the big favourite going into the meet, looked very uncomfortable the previous day when winning his preliminary round heat in 10.61 and almost miss out on qualifying for the final.

Meanwhile, twin sisters Tina and Tia Clayton finished first and second in the Girls’ Under-17 100m final, which ended in a sweep for Edwin Allen High.

Clarendon College’s Dejanea Oakley pulled off a surprise victory in the girls’ equivalent with a good 53.34-second clocking ahead of Hydel High’s Alliah Baker (53.69) and Holmwood Technical’s Rickiann Russell (53.83).

In the field, Serena Cole of Edwin Allen High won the Girls’ Under-17 long jump title with a personal best effort of 6.18m, while Christopher Seaton of KC took the boys’ title with an effort of 7.04m.

Santornya Ralliford of Holmwood Technical took the Girls’ Under-20 discus with an effort of 43.01m, while KC’s Ralford Mullings won the boys’ equivalent with a big personal best throw of 61.43m., which he achieved with his final attempt.  Mullings, with an effort of 16.44m, had finished second in the shot put on Friday behind Edwin Allen High's Christopher Young (17.27m).

Cedricka Williams (45.85m) of Holmwood Technical and Ricardo Hayles (50.66) of Clarendon College won the Girls and Boys’ Under-17 discus titles.

Sunday’s third and final day is scheduled to begin at 12:00 pm.