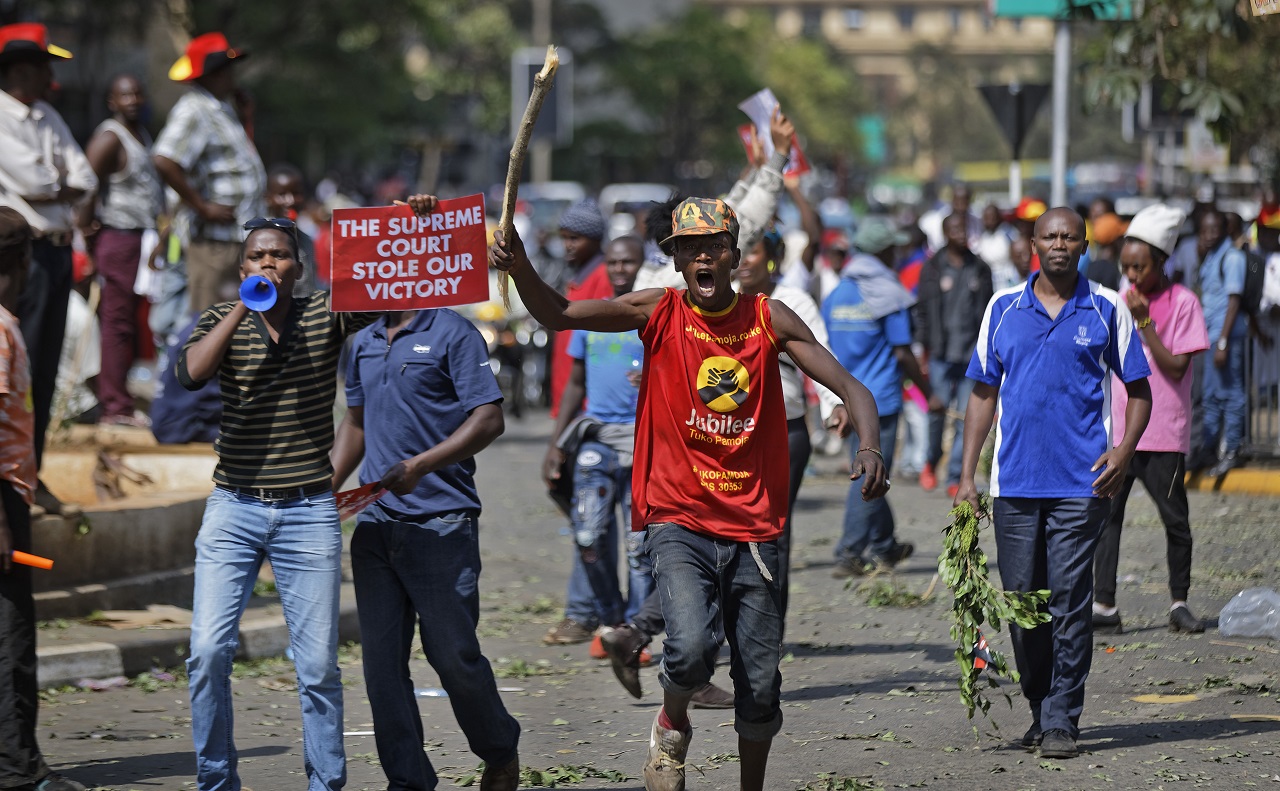 Supporters of President Uhuru Kenyatta, angry at the Supreme Court's nullification earlier this month of the August presidential election, protest outside the court in downtown Nairobi, Kenya Tuesday, Sept. 19, 2017.

Attempts to intimidate Kenya's Supreme Court judges after they nullified President Uhuru Kenyatta's re-election have been "unlawful and savage in nature," the nation's judiciary said Tuesday, as ruling party supporters protested outside the court demanding the judges' removal.

Deputy Chief Justice Philomena Mwilu and Justice Isaac Lenaola. The petitions claim misconduct and bias. Maraga and three other justices ruled 4-2 to annul Kenyatta's re-election and call for a new election, which is set for Oct. 17.

The court ruled the electoral commission had committed "irregularities." On Wednesday it is expected to read its full decision with details.

Jubilee Party supporters also burned tires and blocked one of the major highways into the capital, Nairobi.

The demonstrations that started Monday "are clearly intended to intimidate the judiciary and individual judges," Maraga told reporters, adding that the judges are "prepared to pay the ultimate price to protect the Constitution and the rule of law."

Kenya's police chief Joseph Boinnet has repeatedly ignored calls by the judiciary to act on the threats, Maraga said. Police spokesman George Kinoti called that accusation "not true," saying they have provided protection to all judges at their homes and workplaces.

Human Rights Watch urged the police to heed the chief justice's call and increase protection for the judiciary.

Kenyatta has called the Supreme Court judges "crooks" and warned of unspecified action against the judiciary if he is re-elected next month.

A non-governmental organization on Monday filed two petitions claiming judges had improper contact with lawyers for opposition leader Raila Odinga during his court challenge of Kenyatta's win. Odinga has claimed the election results were rigged.

Separately, a French company that provided equipment for last month's elections says the biometric and results transmission equipment would not be ready for the new vote next month because it would have to be reinstalled.

"This represents a very significant amount of work, which cannot be secured by October 17th," the company, OT-Morpho, said.

The statement raises more questions over whether the new election will be held on time.

In its statement, OT-Morpho denied Odinga's accusations that the system it provided had been infiltrated by hackers. OT-Morpho said it had conducted two separate independent audits that verified there was no infiltration or piracy.

Kenyatta said in a statement that the election must be held within a 60-day period from the court's ruling, as set out in the constitution.