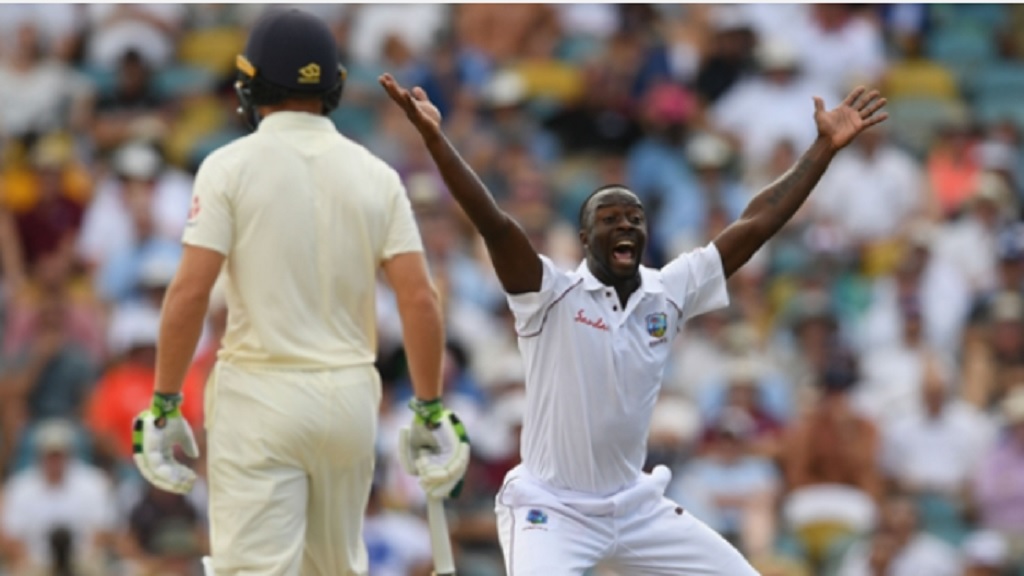 Kemar Roach appeals successfully for an lbw decision on day two of the first Test in Barbados on Thursday, January 24, 2019.

West Indies finished an action-packed second day of the first Test with a 339-run lead after an inspired afternoon spell from Kemar Roach skittled England for 77 in Barbados.

Replying to the home side's total of 289, England lasted just 30.2 overs as they lost nine wickets between lunch and tea to be bowled out for their fourth lowest total against West Indies.

Roach (5-17) was the major reason for the touring team's pitiful collapse, the paceman - playing on his home ground at the Kensington Oval - claiming five wickets for four runs in a stunning 27-ball stint.

After electing not to enforce the follow-on when leading by 212, West Indies endured a batting slump of their own to give their opponents a ray of hope, falling from 52 without loss to 61-5 against the spin-pace combination of Moeen Ali and Ben Stokes.

However, Shimron Hetmyer's counter-punching 31 put the brakes on England's attempts to rally after an embarrassing batting display. He hit two sixes and a pair of fours to put on 59 in a hurry with Shane Dowrich, who ended unbeaten on 27, helping West Indies to 127-6 by stumps.

Hetmyer had also started the day at the crease, adding 25 further runs in conjunction with the tail before he was the last wicket to fall in the hosts' first innings, dismissed by Stokes (4-59) having made 81 from 109 deliveries.

James Anderson had made the initial breakthrough in the morning to complete his 27th five-wicket haul in Test cricket, equalling Ian Botham's record for England.

Yet the Lancashire seamer had little time to reflect on his latest achievement as he watched his team-mates collapse in a hurry.

England fell apart in the face of a probing spell from Roach, who benefited from deflections off bat and elbow respectively to bowl Rory Burns (2) and Jonny Bairstow (12) at the start of the second session.

West Indies captain Jason Holder (2-15) trapped opposite number Joe Root (4) lbw before Stokes and Moeen fell for ducks in successive balls to Roach, the latter well caught by a backtracking Alzarri Joseph in the deep.

Jos Buttler was the fifth and final wicket in the innings for Roach, edging a rising delivery through to wicketkeeper Dowrich, to leave the score at 49-7, and while the tail showed some resilience against a fired-up four-pronged pace attack, Joseph (2-20) and Shannon Gabriel (1-15) wrapped up the brief innings before the break.

Openers Kraigg Brathwaite (24) and debutant John Campbell (33) made steady progress until Stokes (2-31) and Moeen (3-41) made inroads, briefly raising hopes among the large number of travelling fans.

Yet despite the late clatter of wickets, West Indies hold a grip on a Test match that exploded into life after an attritional opening day to the series.

West Indies bowl out England for 77