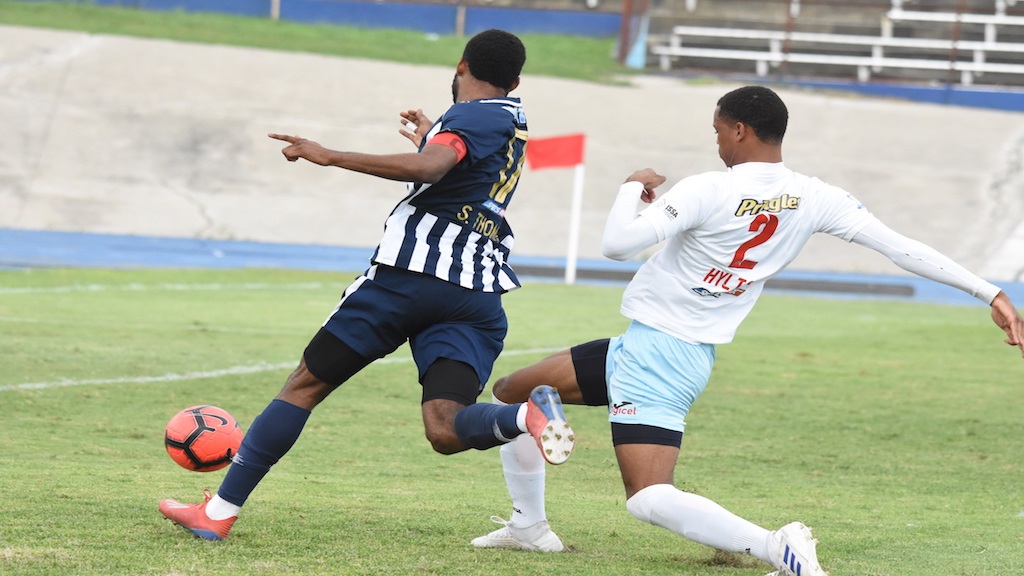 Jamaica College's Shaniel Thomas moves away from Tahy Hylton of St George's College during their Group B quarter-final round match in the 2019 ISSA/Digicel Manning Cup football competition at the National Stadium on Thursday, October 31. The teams battled to 1-1 draw. (PHOTOS: Marlon Reid).

Defending champions Kingston College (KC) whipped Charlie Smith High 5-0, while St George’s College and Jamaica College (JC)  battled to a 1-1 draw in their opening quarter-final round matches in the 2019 ISSA/Digicel Manning Cup football competition at the National Stadium on Thursday.

In the opening match of the doubleheader, top marksman Dwayne Atkinson set up KC’s big victory with a double strike to take his tally to 13 goals this season. Atkinson handed KC a 1-0 lead in the 11th minute and completed his double in the 42nd minute. 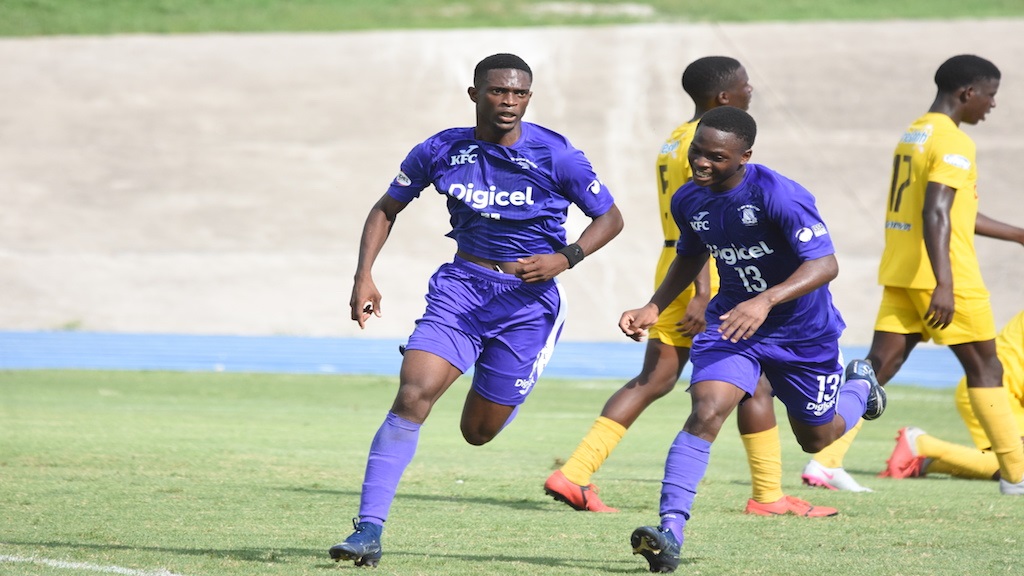 Kingston College's star player Dwayne Atkinson (right) celebrates one his goals with a teammate during their Manning Cup quarter-final round match against Charlie Smith High.

The victory stretched KC’s perfect record to 13 games this season.

The “Purples’ now climbed atop Group A of the quarter-final round courtesy of goal difference ahead of 10-time champions Wolmer’s Boys, which defeated the 1978, 1979 and 1982 champions Camperdown High 3-2 on Wednesday.

Both KC and Wolmer’s Boys are on three points apiece but the “Purples” have a healthy goal difference of plus five compared to the Wolmerians’ plus one.

In the second game of the doubleheader, Chantomoi Taylor scored in the 90+2 minutes to earn 22-time champions St George’s College a share of the points in Group B.

The omnipresent striker left a JC’s defender for dead before slotting home to ensure St George’s College stay in contention for a semi-final spot.

JC, the winningest school with 29 Manning Cup titles, had taken the lead in the 60th minute through defender Nickache Murray following a dull first half.

Both JC and St George’s College are on a point, two behind group leaders St Andrew Technical High School (STATHS), which hammered Excelsior 4-0 the previous day.

The Manning Cup competition now takes a break over the weekend to facilitate the opening round of the all-island Champions Cup knockout on Friday and Saturday.