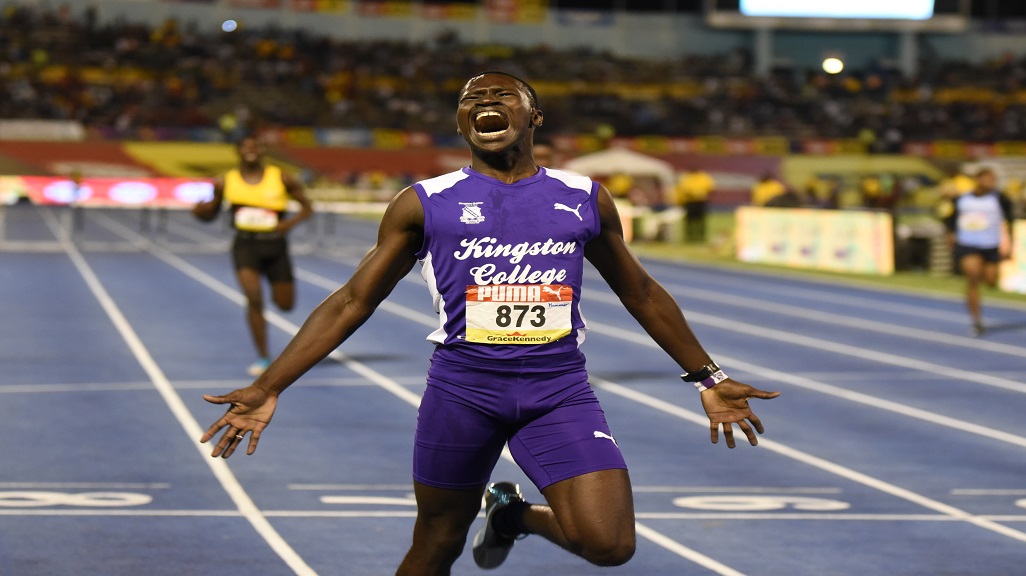 Romel Plummer of KC celebrates after winning the Boys' Class 1 400m hurdles final in 50.43 at the ISSA/GraceKennedy Boys and Girls' Athletics Championships at the National Stadium on Friday, March 29, 2019.

Kingston College (KC) and Edwin Allen High are on course to win the 2019 ISSA/GraceKennedy Boys and Girls' Athletics Championships at the National Stadium following action on the fourth and penultimate day on Friday.

Both schools will enter Saturday’s final day with big leads.

KC, which entered the day with a one-point lead, have surged to 180 points after 18 finals to open up a 40-point lead over second-place Calabar High (140)  in their bid to dethrone the seven-time defending champion and win their first title since 2009 and 32 overall.

Edwin Allen High, on the other hand, have distanced themselves from the chasing pack in their bid for six straight titles and seven overall.

The Clarendon-based school has surged to 150 points from 20 finals to open up a commanding  63-point lead over second place Hydel High on 87.

KC secured 25 points in the 400m hurdles finals courtesy of a 1-2 finish in Class 2 and victory in Class 1.

KC secured a 1-3 finish in the Boys’ Class 1 triple jump for 15 points. Terrol Wilson leapt 15.79m to secure the victory.  JC’s Apalos Edwards finished second with an effort of 15.64m, while Shakwon Cox of KC took third with 15.56m.

Javar Thompson of Calabar High won the Boys’ Class 3 long jump with an effort of 6.62m. However, the win did little to impact KC as Christopher Seaton claimed the silver medal with his best jump of 6.59m. His teammate Anthony Willis also ended up on the podium after he won the bronze medal with 6.43m.

Meanwhile, Calabar High continued their dominance in the Boys’ Class 1 100m with their third gold medal in four years.

The fast-improving Oblique Seville, a transfer from Holmwood Technical, scored a big victory. He crossed the line in a personal best 10.13 seconds, just outside the record of 10.12 set by KC’s Zharnel Hughes in 2014.

Ryiem Robertson of JC finished second in 10.19, while  Conroy Jones (10.32) of STETHS finished third. Calabar's Michael Stephens, one of the pre-race favourites, could only manage fifth in 10.35 seconds.

JC's Christopher Scott clocked 10.73 seconds to destroy the field in the Class 3 final and once again dip below the previous record of 10.79 set in 2018 by Nkrumie.

Scott had shattered the record in the semi-final when he won his heat in 10.69 seconds.

Yourie Lawrence of KC finished second in 11.04 just ahead of his teammate Christopher Seaton who crossed the finish line in 11.12. 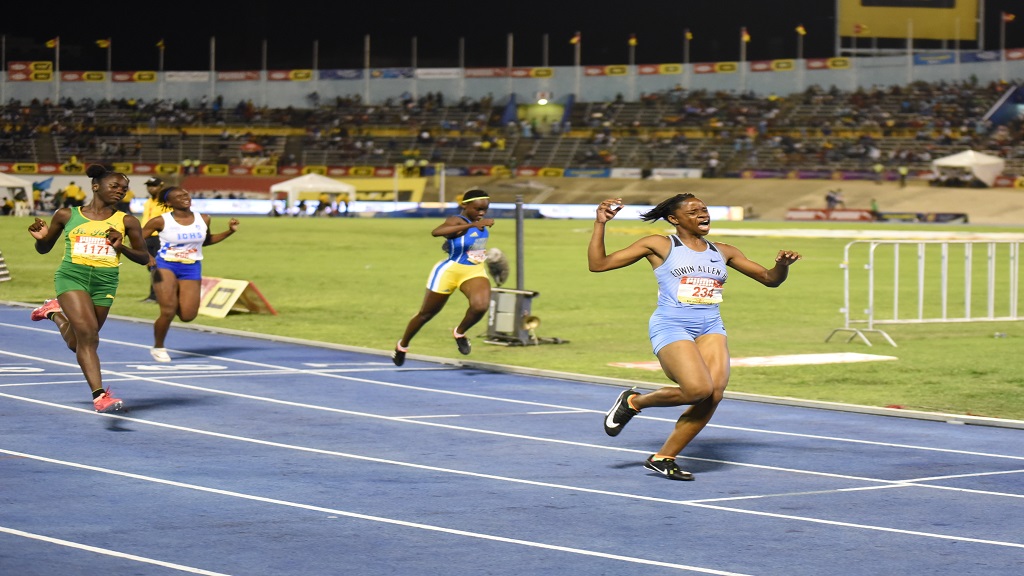 The Edwin Allen rising star exploded from the blocks and rocketed away from the field to cross the finish line in an incredible 11.27 seconds. The time eclipse the 11.37 seconds Tia set earlier this season and which was an age-group record for 14-year-olds.

Another Edwin Allen star sprinter, Kevona Davis, as expected won the Class 2 final in 11.17 seconds, a season’s best and an Under 18 world-lead.

Ackera Nugent of Excelsior was second in 11.42 while the bronze medal went to Campion College standout Krystal Sloley who stopped the clock in 11.48 seconds.

Ashanti Moore of Hydel also produced another outstanding performance winning the Class 1 100m in 11.17 seconds to finish ahead of Ockeria Myrie of Petersfield who clocked 11.51.

Moore’s time was also a Under 20 world lead eclipsing Davis’ time and that of Tamari Davis’ 11.32 set earlier this month in Gainesville Florida.

In the Class 4 final, Sashauna Smith of Vere Technical High was a comfortable winner in 12.28. Abigail Wolfe of  Holy Childhood High won the silver in 12.39 while Toniann Bryan of Immaculate Conception was third in 12.40.

The fifth and final day on Saturday starts at 1:00 pm.

KC lead Calabar by one point at Champs; Edwin Allen surge ahead