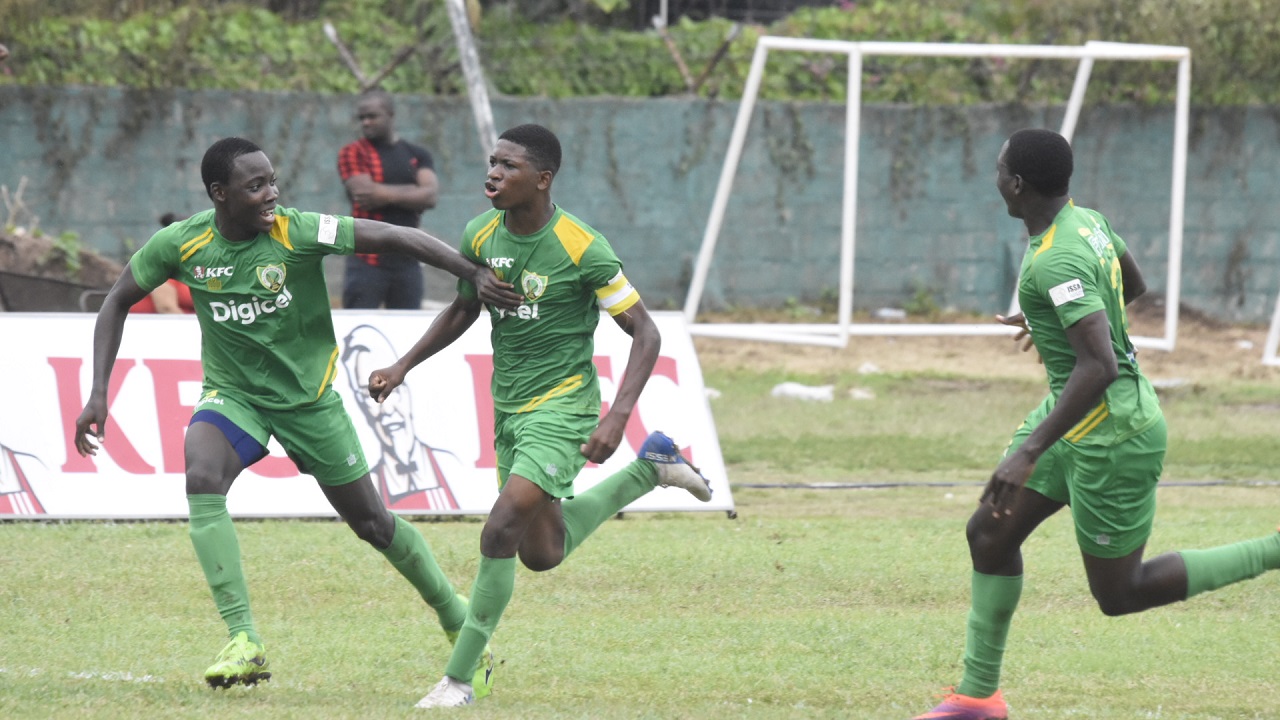 Kingston College (KC) improved their perfect record to eight straight victories to book their spot in the second round of the 2018 ISSA/Digicel Manning football competition on Match Day 17 on Friday.

Last year's beaten finalists St Andrew Technical High School (STATHS) and St George's College are also through to the second round as the two automatic qualifiers from Group A along with Group F leaders, five-time defending champions Jamaica College.

KC, winners of the Manning Cup on 14 occasions, defeated Calabar High 2-0 at the Stadium East field. Victory represents the second for KC over Calabar this season following an away 4-0 whipping in their first leg fixture on September 18.

KC have now moved to maximum 24 points from eight games, a five-point lead over second-place Mona High (19), which defeated Clan Carthy 3-0 at the Franklin Town Sports Complex to virtually wrap up the other automatic qualifying spot from the group.  Third-place Calabar High (13 points) are six behind Mona High and a further 11 points adrift  of KC.

With two matches to go in the preliminary round, KC well placed to win Group B.  Interestingly, KC are yet to concede a goal and have scored 44.

Meanwhile, Excelsior High ended the perfect record of St Catherine High, leaving KC as the only of the 42 teams yet to drop a point.

The seven-time champions carved out a 2-1 victory on their home turf to avenge the 2-0 defeat they suffered at St Catherine High on September 18.

Goals by Rohan Beadle in the 35th minute and Demorney Hutchinson in the 62nd put Excelsior 2-0 up before substitute John-Christoff Pringle cut the deficit in the 73rd minute.

The victory carried Excelsior High to 18 points the same as St Catherine High, which still lead Group E, this by goal difference.

Excelsior took the lead from what seemed like a speculative shot from Beadle midway the St Catherine half, but eventually eluded the effort of goalkeeper Raheem Henry and lodged into the top right hand corner of the goal.

St Catherine High started the second half positively pushing back Excelsior with one-touch passes. However, it was Excelsior which got the first scoring chance when Alton Frankson headed  just wide of the target.

St Catherine High had a good chance from Javaughn Cole, whose shot from the edge of the 18-yard box on the right had goalkeeper Javaughn Bhalai producing a good effort to prevent a goal.

Excelsior increased their lead when Hutchinson, unmarked at the edge of the six-yard box, rose to head home a cross that gave goalkeeper Henry no chance at close range.

Bhalai was called on minutes later to keep Excelsior's two-goal cushion intact by blocking a shot from St Catherine's Marcovich Brown, but eventually let in a goal, when he stopped a fierce shot by Cole, with the ball rebounding to Pringle for him to shoot into the goal from inside six-yard box.

St George's College confirmed their second round spot with a 3-0 victory over Papine High at Winchester Park. The victory pushed St George's College to 22 points from eight matches, a four-point lead over STATHS, which won 1-0 at Cumberland High. With two matches to go in the preliminary round, St George's College and STATHS cannot be caught by any of the teams.

JC won 6-0 at Campion College to confirm their second round spot. They moved to 22 points from eight games, a three-point lead over Hydel High.