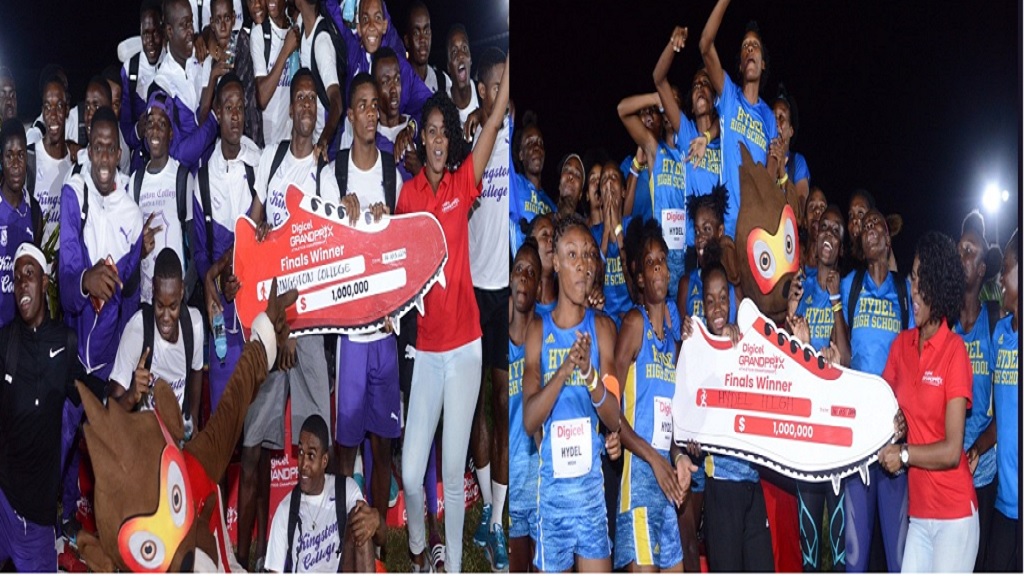 The combination of photos show athletes from Kingston College (left) and Hydel High displaying their symbolic cheques after the schools won the fifth staging of the Digicel Grand Prix Athletics Championships on Saturday, March 16, 2019 at GC Foster College.

The victory for KC means that the North Street-based school had dominated the three biggest meets ahead of the SSA/GraceKennedy Boys’ and Girls' Athletics Championships where Calabar High will be seeking eight straight boys' titles and 29 overall and Edwin Allen, their sixth straight girls' title and seven overall.

Hydel High ended with 126 points to secure the first major track and field title for the school and in the process ended the domination of Edwin Allen High, which had won the girls’ title every single year since the Grand Prix Athletics Championship was launched five years ago.

Edwin Allen High had to settle for second place with 94 points, 32 points behind the new champion.

KC and Hydel High were each presented with symbolic cheques valued $1 million each toward gym equipment or development of their school’s training facilities for winning the respective titles.

On their way to the boys' title, KC secured six victories, which comprises four on the track and two in the field.

Romel Plummer continued his hot form this season with his second sub 52 seconds clocking in the Boys' Class 1 400m hurdles, an event where KC scored big with 16 points courtesy of a 1-2 finish.

Plummer, who dropped a sub-52 a week ago at the Corporate Area Championship when he clocked a meet record 51.08, returned to clock 51.62 seconds to easily win the Boys' Class 1 400m hurdles. Plummer's teammate Shanthamoi Brown came home second in 52.30, while Excelsior High's Devontie Archer finished third in 52.53.

In the Boys' Under-17 100m, KC also scored big with 15 points courtesy of a victory and a third place.

KC's star jumper Wayne Pinnock did not break the eight-metre barrier,  but he easily won the Boys' Under-20 long jump, an event where the 'Purples' also secured a 1-2 finish.

Pinnock won with 7.76m, which was achieved on his first attempt. He only had one other jump, a 7.48m effort and passed up his other three.

Shacquile Lowe ensured a 1-2 finish for KC with an effort of 7.50m, which he achieved on his first attempt. Just like his teammate, Lowe had only one other jump, a 7.47m effort. Calabar High's Nickaoli Williams (6.96m) finished third.

Tyrice Taylor of Enid Bennett High recorded one of the best performances on the day by smashing the Boys' Under-20 800m record in 1:48.85 seconds, a time which was just one-hundredth of a second outside Vere Technical's Sherwin Burgess' Champs record of 1:48.84 done 32 years ago.

In the girls' championship, Hydel High secured four victories on their way to dethrone Edwin Allen.

Davis ran a stunning 22.82 seconds to win the Girls' Under-20 200m final, well ahead of Ashanti Moore of Hydel, who clocked 23.10 for second and Dasay Freeman of The Queens School, who clocked 23.63 for third.