Juventus-Inter among 5 Serie A games postponed amid coronavirus fears 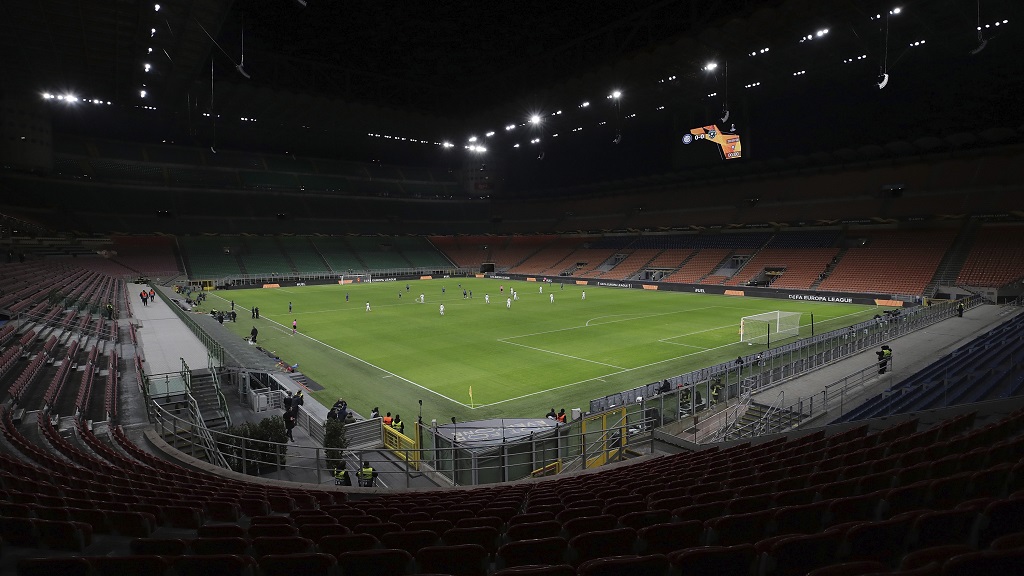 A general view inside the empty San Siro stadium in Milan, Italy during the Europa League round of 32 second leg football match between Inter Milan and Ludogorets on Thursday Feb. 27, 2020. Inter beat Ludogorets 2-1 in an empty stadium as a precaution because of the virus outbreak in Italy. (Emilio Andreoli, UEFA via AP).

Five Serie A football games in Italy were postponed on Saturday in an attempt to contain the spread of a virus outbreak.

The fixtures were originally due to be played without fans this weekend but the decision to call them off was taken by the league as part of “urgent measures for the containment and management” of the COVID-19 disease.

Italy has been struggling to contain the rapidly spreading virus with 888 cases recorded in the latest tally, making it the hardest-hit country outside Asia.

With clusters of virus infections in the Lombardy and Veneto regions, the biggest fixture lost from the Serie A program is league leader Juventus' home game against Inter Milan in Turin.

The game between first and third was scheduled for Sunday but is now due to be played on May 13. The other games postponed until then are AC Milan vs. Genoa, Parma vs. Spal, Udinese vs. Fiorentina and Sassuolo vs. Brescia.

Consequently, the Italian Cup final will be delayed by a week to May 20.

“The emergency due to the cases of coronavirus in Italy has forced the government and other authorities to make unpopular but necessary decisions," Italy's sports minister Vincenzo Spadafora said. “Decisions that have to be formed around and updated by the developments of the data and by advice from the scientific community, making citizens’ health the priority and trying, as much as possible, to limit the consequences for all citizens.”

Spadafora added that the decision to postpone the games was “unanimous” by sports and football authorities who feared that playing in empty stadiums would have "repercussions on our country’s image.”

Researchers at Milan's Sacco Hospital said they isolated in four patients an Italian variation of COVID-19 that is different from the strain identified in Wuhan, China, where the epidemic began. They expressed hope the discovery could lead to more targeted treatment of patients.

Four games were still due to go ahead in Italy's top division this weekend.

football has also been impacted elsewhere in Europe, with games in the top two divisions in Switzerland postponed after a federal order that will see all events involving more than 1,000 people banned until mid-March.

Tokyo, IOC officials reiterate that the Olympics are on