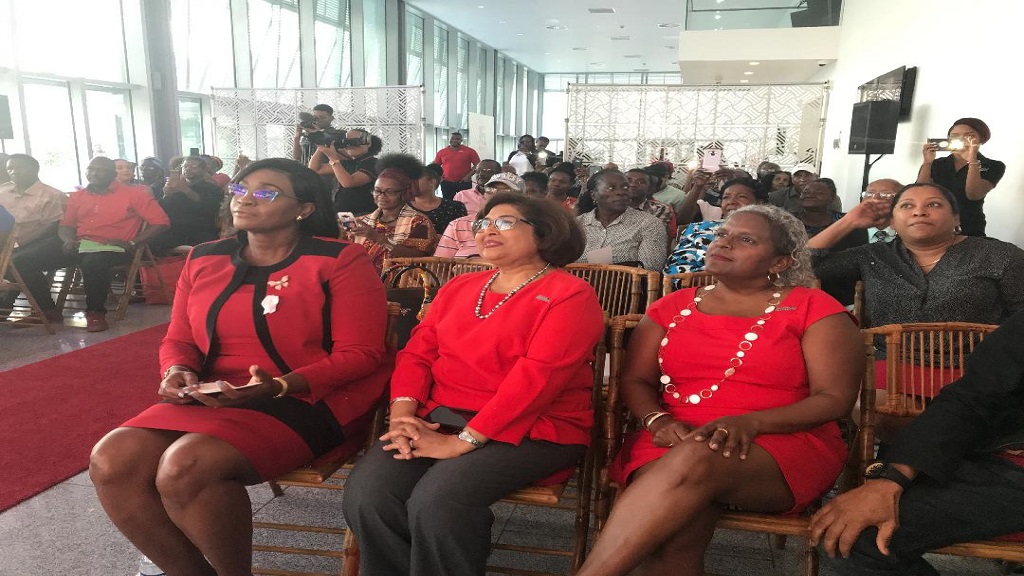 Juliet Holness (left), Member of Parliament and wife of Prime Minister Andrew Holness, seated alongside Jean Lowrie-Chin (centre) , Chairperson of Digicel Foundation; and Karlene Dawson, CEO of the Foundation at its awards ceremony on Tuesday at Digicel Headquarters in downtown Kingston.

Juliet Holness, wife of Prime Minister Andrew Holness, has issued a call for social enterprise groups across the country to start realising the power that they have to inspire other members of their communities towards realising their full potential.

Speaking at the Digicel Foundation Awards Ceremony on Tuesday, Holness, who is also Member of Parliament (MP) for East Rural St Andrew, said she was encouraging citizens who were part of the above-mentioned groups, to strive to be change agents.

She said she felt this must be the approach if the goal of building a better Jamaican through building out communities is to be achieved.

She also argued that while the Government and other interest groups continued to work towards developing communities, if persons in the community started to buy into the concept that they too have the power to mobilise and inspire others around them, then the goal of nation building would be achieved at a faster pace.

“Successful communities are those groups which are able to inspire others to make change,” said Holness as she made her address at the ceremony that was held at Digicel Headquarters in downtown Kingston.

“Being among the top 15 for the Digicel Foundation 15th anniversary is only, I believe, the start of the journey as change-makers and inspirational leaders. Today I encourage you to continue to strive to build a better Jamaica in building out your communities,” said Holness.

“So as you return to your communities today, the question you must continue to ask yourself when you leave here, is how will I further inspire others? How will I create a sustainable future for my community?”

Fifteen community groups (one in each parish, plus one ‘extra’) were each granted $2 million in funding for a community development project, by Digicel Foundation.

Karlene Dawson, CEO of Digicel Foundation, said under the theme “’15-Strong’, Digicel Jamaica Foundation, with a call for applications in March 2019, embarked on a quest to identify 15 new community development projects for investment.”

Dawson added that 30 shortlisted groups took part in a training seminar on October 30. The training was led by. K’ adamawe K’nife, Strategic Planning and Entrepreneurship Specialist from the Mona School of Business Centre for Entrepreneurship Thinking and Practice.

Dawson said officers from Digicel Foundation had the difficult job of shortlisting the top 30 applicants, and for the last three months, the board of directors had been visiting the groups to decide on the final 15, which were awarded $2 million each.

Also, the other 15 runners-up were awarded for participating.