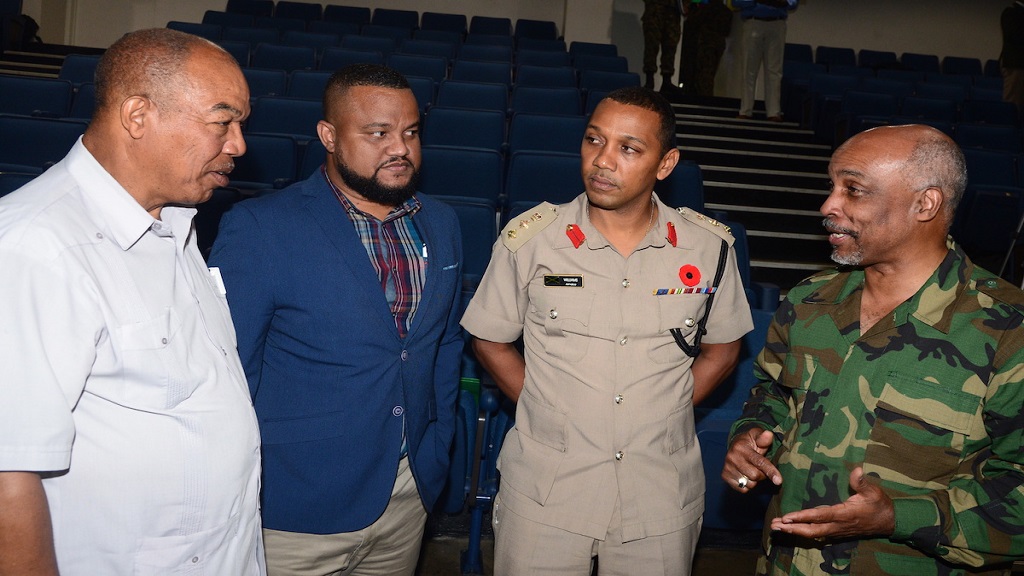 JOA President Christopher Samuda (right) speaks passionately about Pan Am Games in Lima, Peru in 2019 to (from left) Dr Warren Blake, President of JAAA; Ryan Foster ,CEO of JOA; and Col Mahatma Williams, Chairman of the JDF, Sports Board. This was at the official press launch of " Lima Invasion " held at the Up Park Camp on Tuesday ,November 6,2018.

The Jamaica Olympic Association (JOA) ramped up its drive for greater quality, participation and performance of Jamaica’s sporting talent on the global stage with the official launch of ‘Lima Invasion’, a roll-out of its plans for the 2019 Pan Am Games that will run from July 26-August 11 in Lima, Peru.

Twinned with the announcement was a newly-formed association with the Jamaica Defence Force (JDF), at its Up Park Camp headquarters in Kingston on Tuesday.

“The ‘Lima Invasion’ is more than the expression suggests. It is more than conquest of a space, an event, in time or in the life of man. For us at the JOA, the national body for Olympic and other sports, it will be a physical affirmation by a people representing a nation that what ‘born a yard’ or is of the ‘rock’ lineage has guts, gumption, intestinal fortitude and valour,” said Christopher Samuda, President of the JOA.

“For us at the JOA, the visionaries that we strive daily to be in the interest of our members and athletes, the Lima Invasion will telescope our journey in the future to Tokyo, known as the land of the rising sun, where the Olympic dream will culminate and must gain expression not necessarily in gold, but in personal affirmation and triumph,” Samuda stressed.

Tokyo will host the 2020 Olympics and the JOA, under its ’10 in 20’ goal, is looking to have unmatched Jamaican sporting participation at the ultimate global sporting event.

The Pan Am Games is a step not far behind and Ryan Foster, the JOA’s CEO, pointed to Jamaica’s “rich history” since the 1951 debut, plus the record 14-medal haul of 1959.

He noted Jamaica’s success in medalling at each Pan Am outing, to total 25 gold, 42 silver and 62 bronze in 17 competitions, as well as their largest ever contingent, 65 for seven disciplines at the Toronto Games, which earned nine medals in 2015; and the record entry for sports, 10, in 2011, which won seven medals in Guadalajara, Mexico. For 2019, the JOA is looking to rewrite the books.

“When we arrive in Lima it is our goal to surpass the records set in previous years. We hope to have the largest contingent participating in the Games, we intend to exceed the record of having 10 sports represented at the Games and we are desirous of coming away with more than 14 medals we earned in 1959,” Foster said. “We intend to obliterate every record, to take Lima by storm.”

Additionally, four other sports are in line, with swimming, taekwondo, wrestling and badminton pending.

Opportunities at strengthening their goal and that of those already qualified may be yielded through the JOA’s newest partnership, one with the JDF that is still in its embryonic stage.

“It depends on what facilities we have and the synergies that can be created with those associations. There are clear partnerships already like with boxing and rugby, we already have those partnerships and, for example, most of the national rugby players are military people. So the partnership had started long time ago, but it was not formalised. The Chief of Defence Staff, Rocky Mead, in discussion with the President (Samuda) is looking to formalise it so that we’ll go forward in a more structured way,” explained Colonel Mahatma Williams, Chairman, JDF Sports Board.

“They may benefit from training venues and a set of physical training instructors that deliver training in a more structured way and also creating a larger pool that the various associations can select athletes from,” added Colonel Williams.

That could well set the training ground for ‘Operation Lima’.

“The JOA creates this opportunity and all we ask of our national athletes is that they invade the territory, establish indelible landmarks and unearth milestone legacies that will make successive generations applaud,” said Samuda. “All we ask of the national sport guard is to be in the vanguard of this new era of dynamism, activism and progressivism in sport.”

JOA president urges athletes to be ‘good ambassadors’ of Jamaica