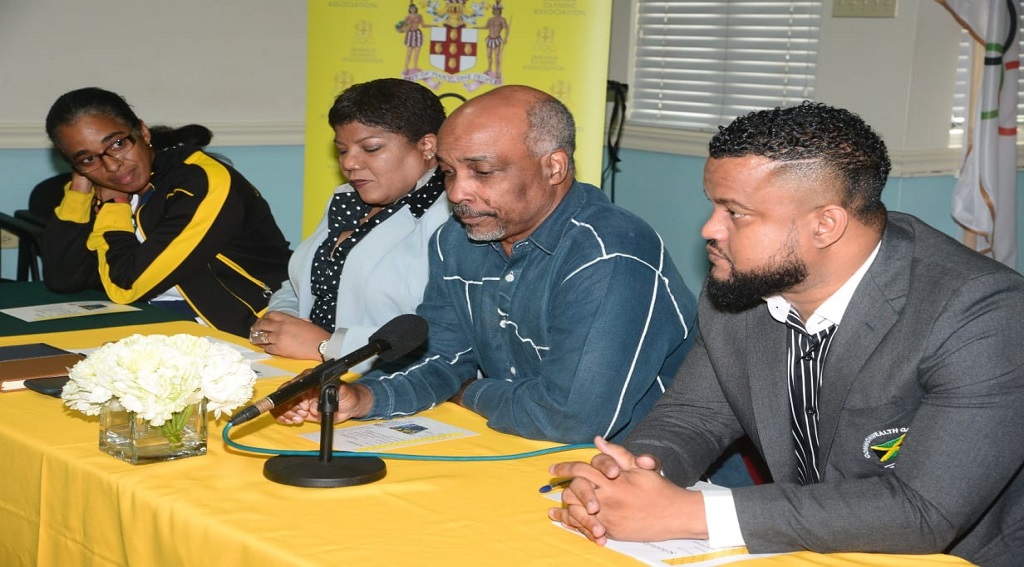 Ryan Foster (right), General Secretary of the Jamaica Olympic Association (JOA), talks while sitting at the head table, during the launch of the Women in Sport Commission at the Olympic Manor, the JOA headquarters on Cunningham Avenue in Kingston. Looking on are (from left) Suzanne Harris-Henry, Secretary General, Jamaica Paralympic Association, Nichole Case, Chairperson of the Women in Sport Commission and Christopher Samuda, President, JOA.

The Jamaica Olympic Association (JOA) launched its Women in Sport Commission, a call to action to empower girls and women to participate in sports and become decision-makers.

"This is in fact a historic moment for the Jamaica Olympic Association. It is the first time that we’re inaugurating a Women in Sport Commission, a mandate that has been articulated for several years by the International Olympic Commission (IOC) and which has gained expression in several countries,” said Christopher Samuda, the JOA President, during the launch at its Kingston headquarters, Olympic Manor, this week.

“One of the mandates of the Women in Sport Commission is to build character particularly in our young women … so that in any circumstance a young woman may find she will rise and be an example to others in sport,” Samuda added. “We’re very happy that this is happening, it is long overdue.”

Nichole Case is chairperson of the Commission working in sport to eliminate gender bias, increase participation and advocate women’s leadership.

“Our objectives are to eliminate gender bias by actively influencing the portrayal of women in sports to advocate equality and eliminate biases; increase participation by encouraging and creating opportunities for girls and women to participate in sports as athletes, coaches and administrators; and advocate women’s leadership  by providing leadership and talent development to inspire and mentor other women and girls to grow and develop their sport,” Case outlined.

At its launch this week, the body named as its first IOC 2018 Women in Sport honouree, Yvonne Kong, for her work in promoting the development and participation of women and girls in sport. A veteran in sport, who pioneered several education programs, including a Masters and Physical Education at G.C. Foster College, she has been a champion for the under privileged and has been instrumental in ensuring gender equity in the Olympic Solidarity Scholarship opportunities for women across different sports in Jamaica.

President of the Jamaica Badminton Association, Case, identified three of the Women in Sport Commission’s key focus areas for 2019 as Market Research and Data Collection, Execute a Women in Sports Empowerment event and launch a year-long Women in Sports awareness campaign.

The execution of the Women in Sports Empowerment event aims to teach and develop leadership skills that will empower more women to participate in various aspects of sport, while the Women in Sports Awareness Campaign strives to heighten the recognition of women who are actively contributing across various areas of sport, encapsulating athletes (junior and senior), coaches and administrators.

Ryan Foster, General Secretary of the JOA, advised that the JOA has established a working group to govern the Commission’s operations.

“The working group will also look at strategic alliances with other Women’s Commissions within the region and the broader context of the IOC. The working group will ensure that the remit of the Commission is being achieved; that the current and relevant issues of gender equality, not only the participation in sport from an athlete standpoint, but in the overall governance of sport," added Foster.

Case said the Commission was established in accordance with the International Olympic Committee (IOC) Charter and will function in an advisory capacity that enables its global partner to support the development of its programmes and structures.