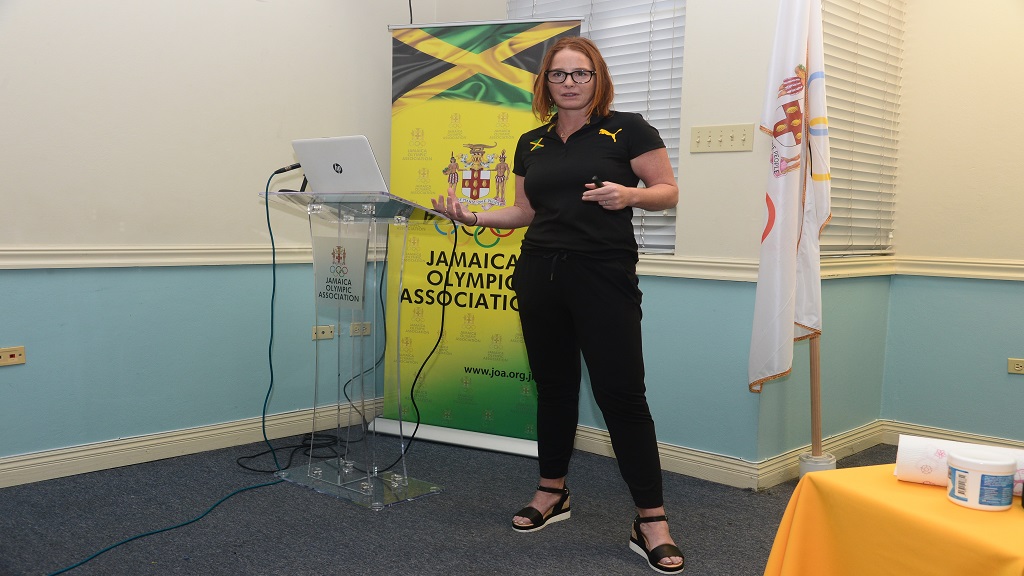 The Jamaica Olympic Association (JOA) continues to fulfill one of its expressed mandates of building capacity and technical expertise in the field of physical education. Early this year, the JOA, the national association for Olympic and non-Olympic sports, hosted noted physiotherapist, Dr. Jo Brown, owner of The Sports Physico, a therapy outfit in the Sunshine Coast in Australia.

Brown’s credentials are formidable, having worked with over 10 sports at the international level and achieved a Masters in Sports Physiotherapy and a Doctorate in Philosophy (Ph.D) in Sport and Exercise Medicine.

An international lecturer,  Brown was, at the invitation of the JOA, first exposed to Team Jamaica at last year’s Commonwealth Games in the Gold Coast.  Since then she has worked with some of the country's elite track and field athletes and her last major international assignment was at this year’s Australian Open in Melbourne Park.

JOA President, Christopher Samuda, has made it clear that “the JOA places tremendous premium on sport education in enhancing the knowledge base and in building the technical competencies of our professionals as we, the JOA, seek to optimise the performance of our athletes and secure their long term development”.

Dr. Brown is scheduled to be in Jamaica next month for part two of the Olympic programme and will address the subjects of neurodynamics and treatment of nerve pain, recovery strategies and lumbopelvic pain and management while examining case studies.

Secretary General and CEO of JOA, Ryan Foster, said: “We are hosting Jo under our signature educational forum, which we inaugurated last year, called ‘Stamina’, which continues to provide invaluable opportunities for our members and stakeholders to benefit practically from the knowledge, expertise, and experience of local and foreign experts in various fields of sport.”

The JOA’s initiative has enabled co-operation between Dr. Brown and the Faculty of Sports at the University of the West Indies, Mona, as well as the Jamaica Athletics Administrative Association (JAAA).

“We not only see ourselves as a national representative institution serving our members in the context of sport and the administration of international games but, critically, as the embodiment of, if not the catalyst for, game-changing thinking and methodologies in sports development,” stated Samuda.

In expressing appreciation to the JOA, Dr. Brown said: “Thanks to the JOA, I look forward to the ongoing work with my new Jamaican family and team.”