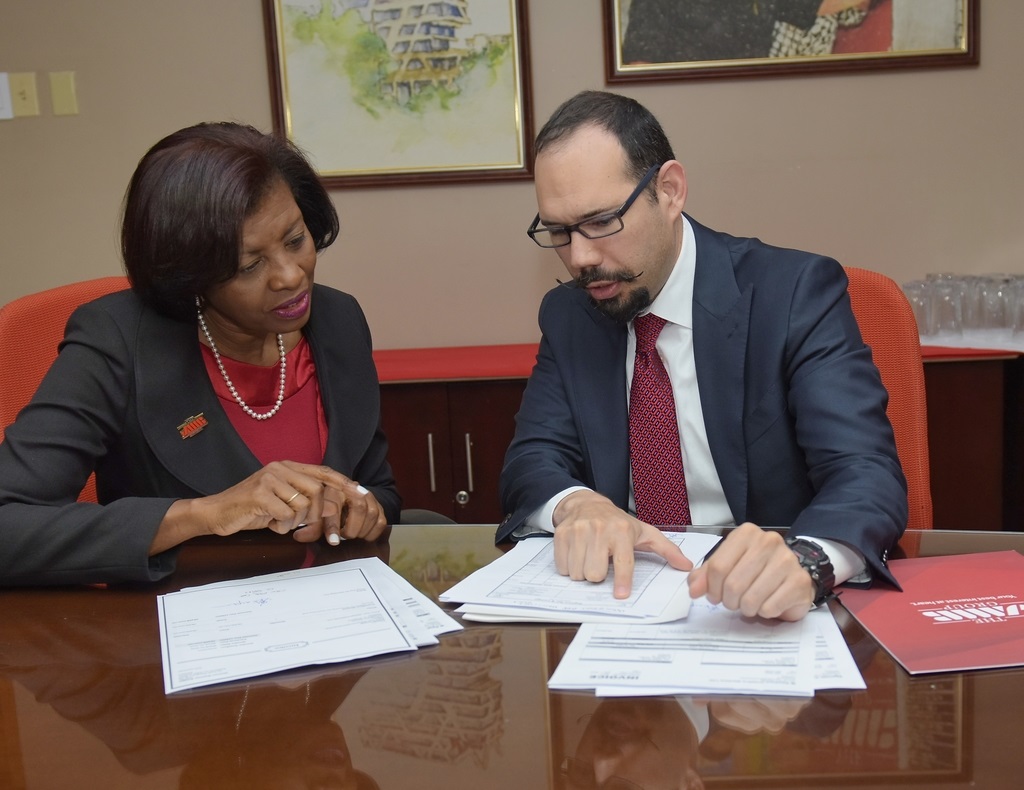 JMMB Money Transfer CEO, Sharon Gibson (left) and Erick Schneider, VP of Business Development for Latin America and the Caribbean, WorldRemit goes through the details of their collaborative performance during a partnership visit by WorldRemit.

The two organizations have forged a partnership since 2012.

The USA remains the largest sender of remittances to Jamaica, as evidenced by the accelerated growth rate of over 200 per cent, of money transfers from WorldRemit, via JMMB Money Transfer.

Remittances play an important role in Jamaica’s economy. According to the World Bank, Jamaicans living abroad sent home US$2.4 billion in 2018, accounting for nearly 16 per cent of the country’s GDP.

Erick Schneider, Vice President of Business Development for Latin America and the Caribbean at WorldRemit, said: “As remittances to Jamaica continue to rise, more Jamaicans in the diaspora are switching to online money transfer methods, which are faster, safer and cheaper than traditional offline (brick and mortar) agents.”

Money transfers sent via WorldRemit to Jamaica, from 50 countries, including Canada, UK and USA, can be collected in cash at over 100 agent locations island-wide or deposited into any account in Jamaica, at any financial institution. Funds are typically received within 24 hours of being sent, provided all necessary documentation has been submitted.

During a partnership visit to Jamaica earlier this year, Erick commented: “Jamaica is our second largest market in the Caribbean and JMMB Money Transfer is one of our major partners in the country. In the coming months, we will be exploring opportunities to expand our partnership further and make it even easier for Jamaicans living abroad, to send money home.”

During a meeting with Sharon Gibson, CEO of JMMB Money Transfer (JMMBMT), as part of the partnership visit, Schneider stated that the main objective of his visit was to strengthen ties and explore opportunities for expanding the partnership between the two companies.

JMMBMT head honcho, Sharon Gibson outlined, “Expanding our partnership will signal another step by us to become synonymous with convenience and provide an excellent client experience, by leveraging opportunities. We will continue to utilise innovative technology to add value to the customer experience, while ensuring clients continue to benefit from faster and safe delivery of money, at competitive rates.”

Although JMMBMT is one of the smallest players in the local remittance market, the company has established relationships with nine (9) international partners to provide inbound transactions from over 140 countries, to Jamaica namely: Omni, Xoom, WorldRemit, RIA, Union Caribe, Sigue, TransFast, Small World and CAM.