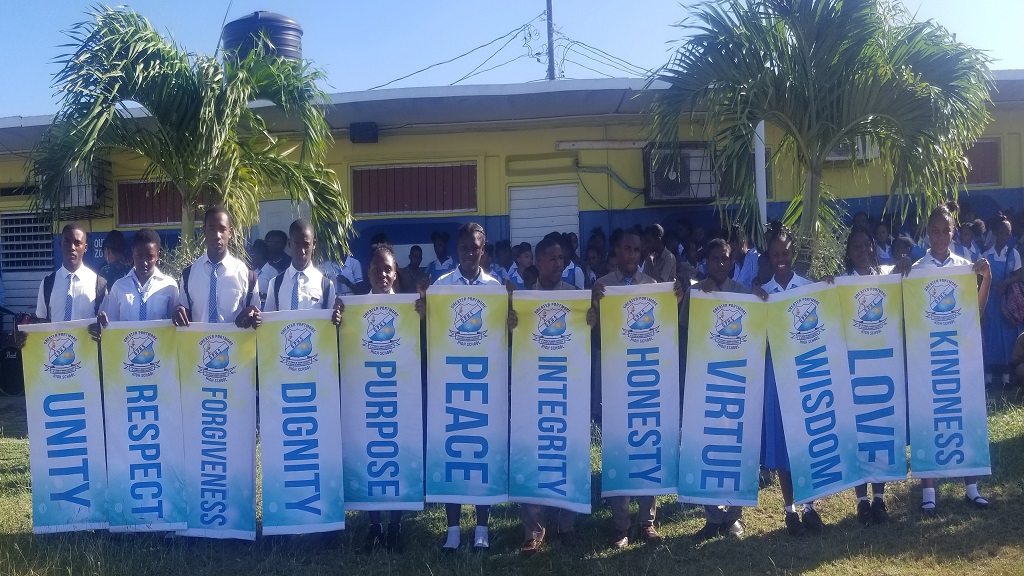 • Students from Greater Portmore High School showing off the new core values of the school, which are underlying principles of the JMMB Joan Duncan Foundation ‘Conversations for Greatness’ programme. The occasion was the launch of the CFG programme at the school during the last school year.

Members of the school's staff - academic, ancillary and administrative – participated in three workshops, dubbed ‘conversations’, with trained CFG facilitators at the start of the programme in September 2018 and were introduced to its core principles.

In giving further insight into the underlying principles of the CFG programme, project coordinator, Catherine Davis-Smith revealed: "The programme addresses the mindset, attitudes, and behaviours of the key stakeholders. It complements the Ministry of Education's Operation Turnaround project, which is focused on curriculum, training, and infrastructural improvement in schools that are currently not meeting the national targets, in critical subject areas." 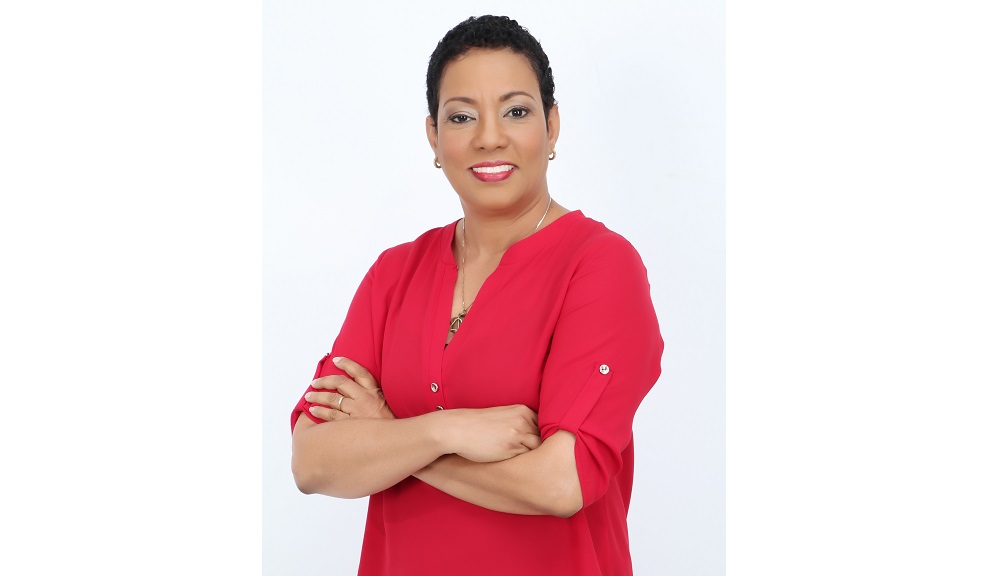 These ‘conversations’ had such a significant impact on the staff that, at the start of the nine-month sustainability period in October 2018, the school’s administrators and staff decided to have an official launch of the CFG programme at the school - so that the impact could be replicated among the other stakeholders, the students and parents.

During the official launch of the Conversations for Greatness programme in February 2019,  banners and other signs were erected across the school’s campus, to reinforce the underlying transformational principles of the CFG programme; serving as a reminder of the school’s commitment to a positive mindset and new approach to learning. In a bold move, through a skit done at the launch of CFG at the school, teachers made a public commitment to demonstrating a more positive approach in executing their duties, inviting students to hold them accountable to their commitment to value, honour and respect all their students.

Principal of GPHS, Ricardo Ross, credits the approach taken by the CFG programme in helping him and his team to shift their mindset to one grounded in transformation and possibility thinking, thereby improving their interpersonal dynamics.

In leading by example, the principal outlined that he has made a greater effort to become more accessible to his students. “I am now more open with my students. I laugh with them (and as a result) now I see more students who want to just say hi, instead of for disciplinary matters,” he shared.

The principal also sings the praises of the programme for the personal impact that it has had. He added: “It has allowed me to exercise more patience and be more open, asking for the facts and not (relying on my own) interpretation of a situation…I am also less judgmental; and this has enhanced my interpersonal dynamics with my team, family and friends.”

The impact of the CFG programme has also spilled over into the operations of the school. GPHS is beginning to see a glimmer of hope as a result of the positive attitude and mindset being embraced, as demonstrated by a 3% and 11% increase in student and staff punctuality - resulting in increased contact hours in the classroom.

Additionally, there has been a reduction in absenteeism, by both students and teachers. Ross added: “The teachers have sought to lead by example (in the areas of punctuality and attendance), which has also led to an improvement (in) the students … (namely their) punctuality, attitude and approach.”

Although the school has been plagued by major behavioural challenges, including anti-social behaviours and major infractions resulting in suspensions, based on the findings shared by the school, GPHS has begun to see a decline in the number of student infractions leading to suspension. Admittedly, there is still a high suspension rate of approximately eight per cent of the 1,120 student body.

There has also been no incidence of gambling, which was a regular occurrence, since the implementation of the CFG programme.

With an enhanced thrust to better tackle the persistent behavioral challenges at the school, a team of CFG ambassadors has developed strategies to promote positive behaviour and build school engagement. These ambassadors are nominated from the school community, and play a key role in leading the charge and executing initiatives to sustain the transformational process within the school.

Among the strategies that the school has begun to implement is its ‘dancercise’ with students and staff members, which is in its embryonic stage. This programme is expected to build rapport among staff and students.

Additionally, the school’s administration and the CFG ambassadors have taken steps to engage other stakeholders as part of the process of shaping positive behaviour. As such, the past students’ association has been re-energized to play a greater role in promoting positive behaviour and act as role models for students.

The association, since being engaged, was also instrumental in sprucing up the grade eight block. In continuing the mobilization efforts, the parent teachers’ association executive has also been reactivated as one step in forging a closer relationship between the school and home, and promoting parental involvement.

Although GPHS is currently among the Ministry of Education’s list of underperforming schools, Principal Ross is determined to rebrand the school and change its reputation, and is one step closer partly thanks to the efforts of the CFG programme.

Catherine Davis-Smith, CFG project manager said: “We are encouraged by the positive results that we are beginning to see at Greater Portmore High School, especially in such a short space of time. Admittedly the journey is not complete, however I am confident that the transformation tools shared will continue to yield great results."

Thus far, the programme has been implemented in 82 schools in several parishes, including Kingston and St Andrew; Clarendon; St Elizabeth; St Catherine; and St Ann.