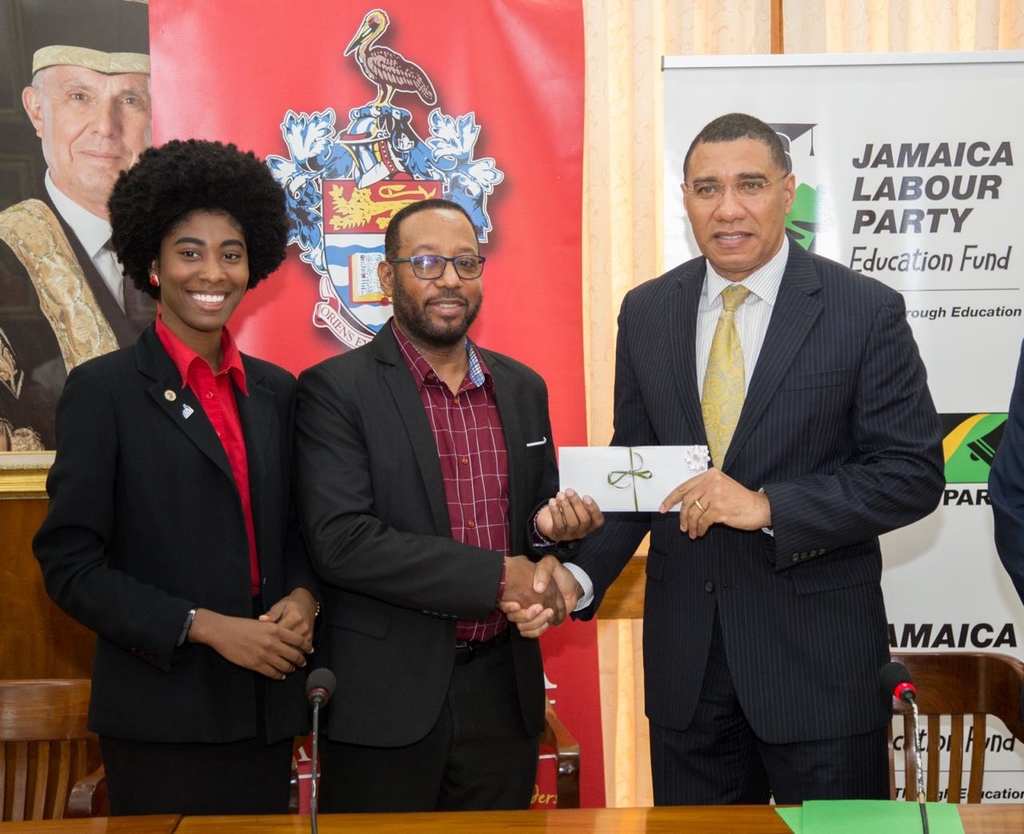 Leader of the Jamaica Labour Party (JLP) and Chairman of the Party’s Scholarship Selection Committee Senator Ransford Braham, earlier this week donated $1.5 million to the University of the West Indies to assist students experiencing financial difficulties, particularly those at risk of being deregistered and barred from sitting their examinations.

Holness, who also serves as chairman of the Jamaica Labour Party Education Fund - made a further donation of $1 million to the institution from his Positive Jamaica Foundation, noting that he identifies with the struggle of university students as he too took a chance in going to university not entirely sure how it would be funded and was also the beneficiary of a bursary while he was student at UWI.

He urged students who will benefit from this donation to “give back by paying it forward” when they became employed so that other students would have it a little easier than they did.

Holness said he was moved to make this donation by recent reports in the media concerning the extreme financial difficulties being faced by university students and therefore contacted the University of the West Indies with a view to alleviating some of the financial burdens being faced by students.

The JLP leader said though it is a political organization, the Jamaica Labour Party is more than just politics, noting that it is an organisation with corporate social responsibilities.

He added that education has always been a core principle of the Jamaica Labour Party; the theme of the party’s education Fund is “Building our nation through education”.

The Jamaica Labour Party Education Fund, which was launched in July of this year has given five students full scholarships to cover all expenses related to their studies and six students received partial scholarships.

The Jamaica Labour Party Education Fund has also issued 136 bursaries to workers or children or wards of workers of the party.

Holness said he hopes this contribution will make a difference in the lives of those students who most deserve it.

In responding to the contribution, Deputy Principal of the University of the West Indies Professor Ian Boxill thanked Holness and expressed that it will go a far way to assist students to complete their studies.

Professor Boxill also said this gesture represented an important symbolism in respect of giving not just from a government standpoint, but from a political party.

He noted that this is an important example that has been set by the Jamaica Labour Party.

Meanwhile, Guild President Christina Williams expressed thanks on behalf of the students of the University of the West Indies for the gesture which she says is an indication by the party that it believes in education and that youth are indeed the future.