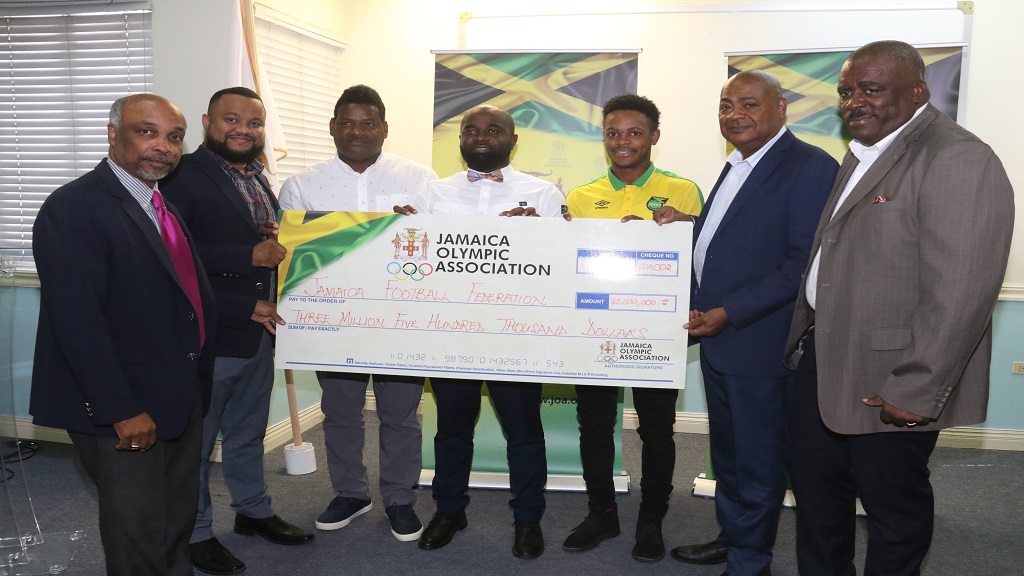 The Jamaica Olympic Association (JOA) has extended its support for the men’s national Under-23 football team with a $3.5 million funding to cover the salary of coaches Donovan Duckie and Merron Gordon.

The financial commitment is an ongoing investment by the JOA in the team’s historic quest for a first-time qualification in Olympic football for Jamaica.

“They say third time’s a charm. Jamaica and Jamaicans love the excitement that accompanies our sporting exploits and our participation in global events. We look for numerous opportunities to don our national colours and to hoist our flag,” noted Ryan Foster, General Secretary of the JOA, reflecting on Jamaica’s historic qualification to respective FIFA World Cup tournaments - in 1998 with the men’s team and for this summer’s women’s championship, also in France.

“Being the apex body with responsibility for sports we feel compelled to support our sporting bodies and so the JOA has invested heavily in helping the Jamaica Football Federation have the Under-23 football male team qualify for the 2020 Olympics scheduled for Tokyo, Japan,” noted Foster.

“In 2018, the JOA announced its Olympic Programme geared towards the development of the team for the qualification competitions that should see Jamaica being one of the two teams from CONCACAF to participate in the 16-nation Olympic Games tournament,” he added. “The investment in large part has seen the top tier Under-23 players being provided with access to training camps and practice games, nutritional support, transportation, gear and match-related costs.

“The CONCACAF qualifiers begin later this year and so the JOA will continue its investment in the coaches for the Olympic period. We are pleased with the guidance being provided to the team by Mr Donovan Duckie (head coach) and Mr Merron Gordon (assistant coach) and are providing the remuneration required to assist them in giving of the talent in this way for the remainder of the Olympic period,” Foster stated.

The handing over took place at Olympic Manor, the JOA headquarters at Cunningham Avenue in Kingston and Christopher Samuda, its president, said the contribution fits their agenda and implored the youth to stay committed and compete in the spirit of Olympism.

“We are in the business of creating solid partnerships and therefore it was not difficult for us to establish this partnership with the Jamaica Football Federation and I want to thank President Ricketts (Michael) for his accommodation for that,” said Samuda.

Michael Ricketts, the Jamaica Football Federation (JFF) President, welcomed the support and expressed hope that its fruits will ripen with Olympic qualification. He lauded the JOA for its foresight and vision and continued commitment to sport development.

“We want to ensure that this joint venture between the JOA and the JFF provide some more historic events,” Ricketts told the audience, which included both coaches and the Under-23 players. “You must be ambassadors. The JFF selected two of who we think are the best coaches in this country and it is up to you to reward us and to reward the JOA. You must commit yourselves, you must be disciplined and I’m absolutely sure the talent is there,” added Ricketts.