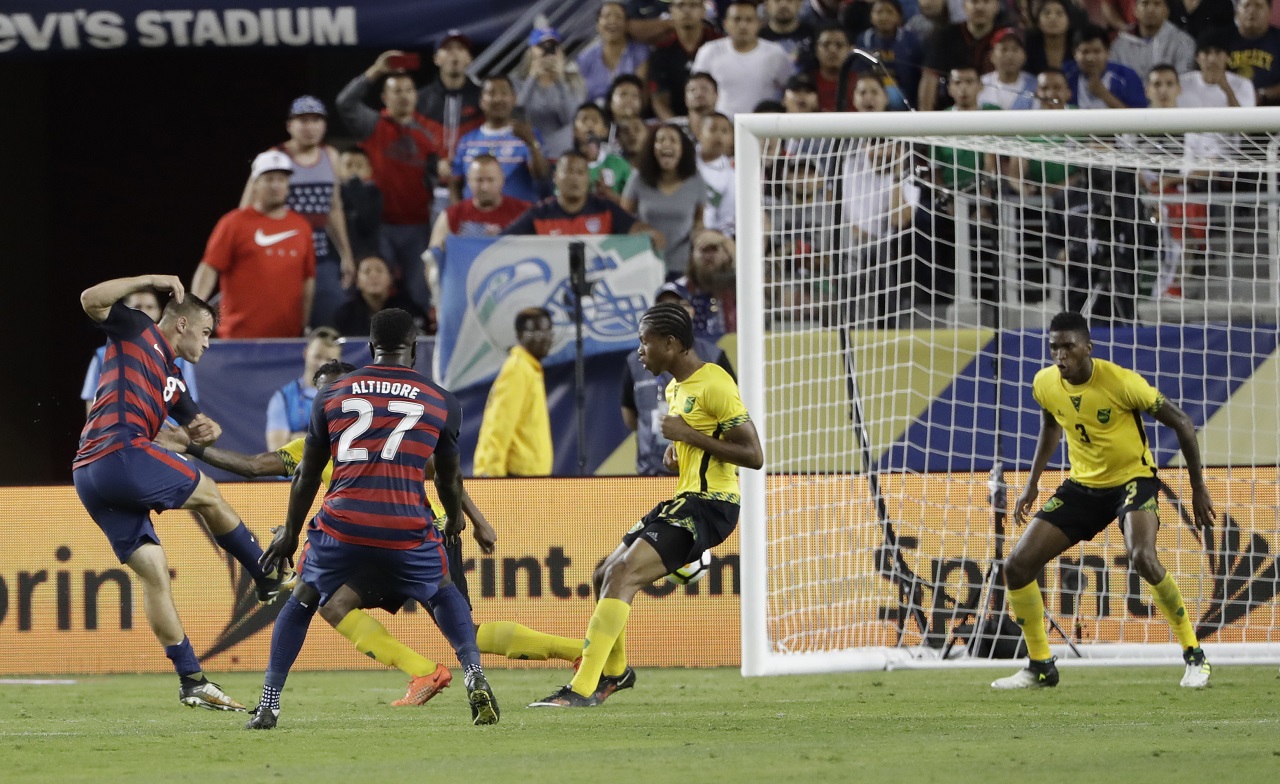 United States' Jordan Morris scores his team's second goal against Jamaica during the second half of the 2017 Gold Cup final in Santa Clara, Calif., on July 26.

The Jamaica Football Federation (JFF) has confirmed that the national senior team will face the USA in a friendly international on June 5 at the Audi Field in Washington, D.C at 7:00 pm.

The match forms part of the teams' preparations for the 2019 Concacaf Gold Cup and will be the first meeting between the teams since the USA defeated Jamaica 2-1 at the 2017 final at the Levi's Stadium in Santa Clara, California.

The match will also mark the third time the two teams in the nation's capital. They played to a 1-1 draw in a World Cup qualifier back in 1997, as well as a 2-0 U.S. victory in the quarterfinals of the 2011 Gold Cup.

For Jamaica’s national senior men's team coach, Theodore Whitmore, "it’s an excellent game to assess the quality of the squad assembled. Further, the timing is good, 12 days before our first game in the tournament and the opponent is perfect; it’s now down to fine-tuning all aspects of the preparation and that is what we are currently doing.”

Berhalter said, "as we prepare for the start of the Gold Cup, this is the perfect opportunity in terms of opponent and venue.

“Playing against Jamaica we get exposure to another different style of play, and one that we may see later in the tournament.”

The 2019 CONCACAF Gold Cup will be the 15th edition, the biennial international men's football championship of the North, Central American, and Caribbean region organized by Concacaf.  The tournament will primarily be hosted in the United States and for the first time, Costa Rica and Jamaica will be hosting doubleheaders in the first round of matches in groups B and C, respectively.

The Reggae Boyz have been drawn into Group C alongside Honduras, El Salvador and Curaçao. The Reggae Boyz will host Honduras in Kingston on June 17, followed by matches against El Salvador in Houston four days later, as well as the group finale against Curaçao on June 25 in Los Angeles.

The USA will begin their quest for a record-tying seventh confederation title with a match against Guyana on Tuesday, June 18 in Saint Paul, Minnesota. Following that match, the USA move east to face Trinidad and Tobago on Saturday, June 22 in Cleveland before closing group play against Panama on Wednesday, June 26 in Kansas City, Kansas.

The Reggae Boyz reached each of the past two Gold Cup finals. Jamaica were beaten 3-1 by Mexico in 2015 -- after ousting the Americans in the semifinals -- and lost to the USA 2-1 two years later.