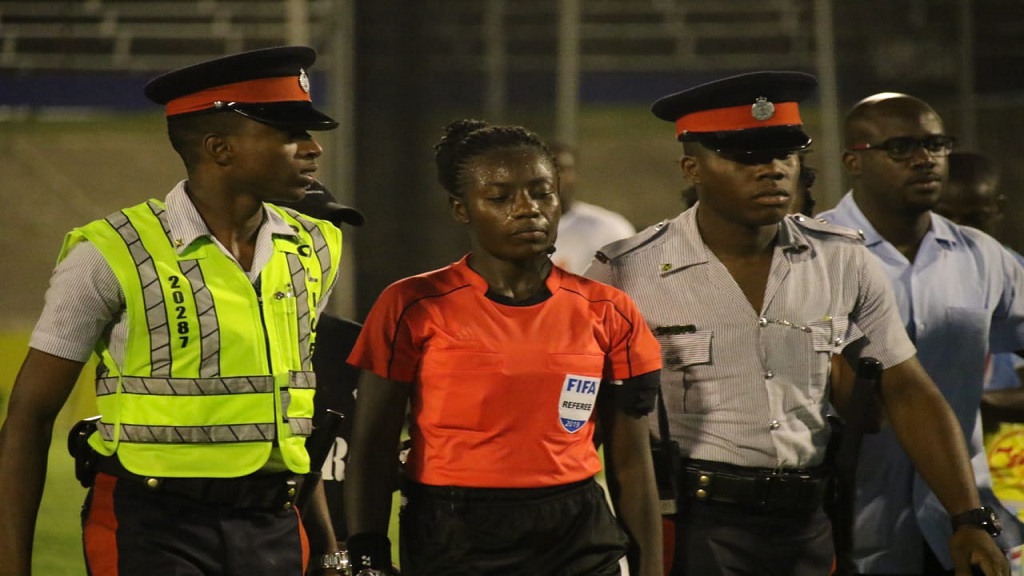 Police officers escort referee Odette Hamilton from the infield following the end of the RSPL final on Monday, April 29, 2019 at the National Stadium.

The Jamaica Football Federation (JFF) says it will investigate the bottle-throwing incident, which marred the final of the 2018-2019 Red Stripe Premier League (RSPL) between defending champions Portmore United and Waterhouse at the National Stadium on Monday night.

It was a rough night for referee Odette Hamilton who had to work overtime to keep players from getting into physical confrontations, most times orchestrated by Waterhouse. And one of those moments caused a bottle-throwing rampage from the crowd.

The bottle-throwing rampage started in the 82nd minute, just moments after Portmore United's Cleon Pryce had received medical attention on the field resulting from a hard tackle by a Waterhouse defender.

The fans pelted the field with bottles, which resulted in a 17-minute stoppage. Fans ran onto the field, some of which were caught quickly by the police.

In a release, the JFF said it "condemns in the strongest possible way the incidences that led to a protracted game in the 2019 RSPL Finals on Monday."

The release further stated that "bottle throwing by spectators and negative behaviour by some players resulted in a display, not in keeping with the excellent tradition of Jamaica in the staging of important games at our premier football location.

"The JFF will immediately hold discussions with the match organisers and the clubs to quickly make recommendations for disciplinary actions as well as to ensure no recurrence of like incidences.

"The JFF wishes to apologise to title sponsor Red Stripe, other sponsors and the majority of football fans present for this negative indiscretion of a few."

Towards the end of the match, the referee had to issue red cards to Waterhouse's Rafiek Thomas and Portmore United's Damian Williams for fighting. Thomas was the aggressor, throwing punches on Williams in full view of the referee.

Referee Odette Hamilton had to be escorted from the field by police officers following the final whistle.

Ricardo Morris scored the only goal of the contest in the 57th minute.

Apart from the RSPL Trophy, Portmore United, the most successful team in the history of Jamaica’s premier league with seven titles, walked away with $2.5 million dollars to add to the $1 million the club won for topping the preliminary stage of the competition.