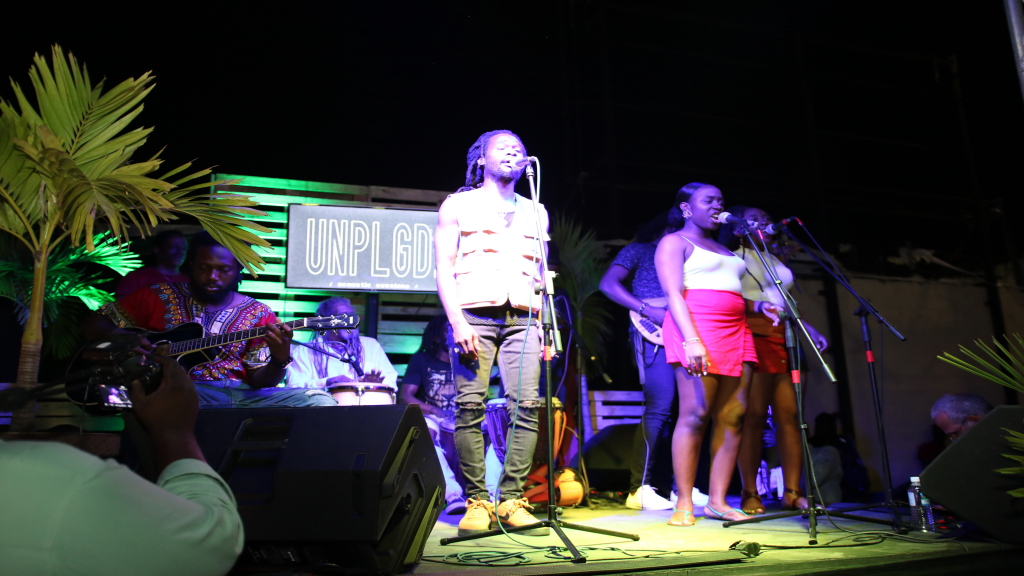 The soothing voices of reggae artistes Sevana and headliner Jesse Royal along with their potent lyrics thrilled the appreciative UNPLGD audience in the intimate setting of Ambassador Bar and Grill in Liguanea, St Andrew Monday night.

Setting the tone, being backed up by one singer and the acoustic guitar, Sevana worked the eclectic crowd with some sultry songs that tugged at the heartstrings and drew them into being her choir for many of the tunes she performed.

Opening the set with ‘Bit Too Shy’, Sevana upped the performance with ‘Sometime Love’ by seeking and getting the patrons to sing “Oh na na nah nah” from the chorus.

Dedicating ‘Carry You’ to her brother, whom she wrote the lyrics for and who designed the one-piece white body-hugging outfit she wore, Sevana ended the song by melodiously blending American Vashawn Mitchell’s gospel anthem ‘Nobody Greater’.

In ‘Haul And Pull’, Sevana outlined that it was appropriate for the present situation with the crime and violence in Jamaica, especially for women and children.

She ended her performance with ‘Nobody Man’, injecting Vannessa Bling’s lyrics ‘dah body yah dedicated to the man weh mi love’ from the song ‘One Man’ which was done in tandem with Vybz Kartel. The screams from the crowd echoed their approval.

It was now time for Jesse Royal and his set, which included the same acoustic guitarist, two bongo drummers, a bass guitarist and keyboard and tambourine players.

The conscious vibes of ‘400 years’ was the opening before Jesse Royal blessed the audience with the Rastafarian greeting. He then launched into ‘Generation’ while inveigling the audience to chant the chorus.

Jesse Royal reaped sweet victory with ‘Hotter The Battle’ before toning it down to caress the ‘Black Woman’, ending by telling the audience that his personal belief is that God is a woman, because of the nurturing, caring and forgiven ways of the heavenly being.

‘Lion Order’ minus his collaboration partner Protoje projected brotherhood and then Jesse Royal remembered the reggae roots by paying tribute to legend Bob Marley with ‘Who The Cap Fit’.

‘Modern Day Judas’ blended into ‘Here Comes Trouble’, which Jesse Royal borrowed from Chronixx that went on to ‘Broken Wings’ as the love continued with his collaboration with incarcerated dancehall artiste Vybz Kartel, ‘More Than You Receive’.

He teamed with Notis Heavyweight Rockaz duo for an impromptu performance that moved into giving thanks for being able to smoke in peace from police in ‘Finally’.

He ended his set with ‘This Morning’ but before exiting the stage he brought on Kemar Highcon, who did two songs.