JEA rolls out public activities to raise awareness about epilepsy 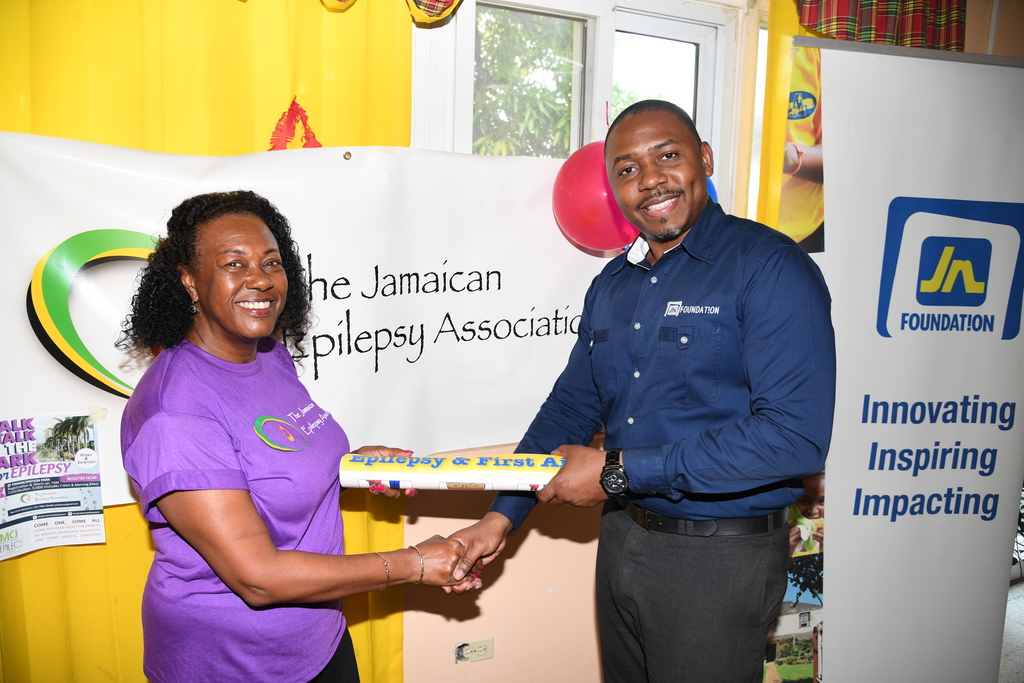 Joy McHugh (left), executive director of the Jamaica Epilepsy Association presents Phillip Lindsay, manager of ISupportJamaica, at the JN Group with an epilepsy first aid kit at the lunch hour event at the Andrews Memorial Hospital in Kingston.

Joy McHugh, executive director of the Jamaica Epilepsy Association (JEA), emphasized that this is why there is a need for an aggressive public education campaign about epilepsy.

In a bid to demystify the disease, the JEA has rolled out a series of public education activities which aim to raise awareness and raise funding, to support persons affected with epilepsy.

With a grant from the Culture, Health, Arts, Sports and Education (CHASE) Fund the Association has embarked on a training programme for school teachers, educating them about epilepsy and teaching basic first aid for seizures.

So far 25 schools have been visited and approximately 500 members of school staff have been sensitized.

The JEA public awareness activities commenced earlier this year and were highlighted throughout the month of November, which is observed worldwide as Epilepsy Awareness Month.

McHugh, also pointed out that the association partnered again with ISupportJamaica.com, a crowdfunding platform, powered by The Jamaica National Group, to raise funds to purchase medication for persons affected by the condition.

The JEA executive director stated that medication for persons affected with epilepsy can be expensive. She noted that the cost for: two to three, or even four to six different combinations of medications, can be from $12,000 to J$45,000 monthly, per person. Persons with epilepsy (PWE) often times have difficulty finding employment.

Consequently, many persons living with the disease have difficulty purchasing their medication.

“The campaign with ISupportJamaica will run from November 1 to January 31, 2020,” she explained, “And, this time the Association’s goal is more conservative, with a target of about $300,000.”

She explained that donations to the cause will go a long way to purchase medication for these persons.

Phillip Lindsay, Manager of ISupportJamaica, at the JN Group, said that persons can support the JEA’s initiative via the platform, which he said is simple and secure.

Interested persons can donate by visiting the ISupportJamaica.com platform at www.isupportjamaica.com, click on Health Education, Epilepsy Awareness; and then click the “Fund Project” button. In addition, donations can also be made via JN Live e-banking; and at any branch of JN Bank or JN MoneyShop, as well as, through interbank transfers.

During epilepsy month the JEA held a series of public awareness sessions in schools; an Open House, featuring a ‘lunch and learn’ at the Andrews Memorial Hospital on November 21; and a ‘Walk & Talk’ on November 24, at the Emancipation Park in Kingston.

Epilepsy is a central nervous system (neurological) disorder, in which brain activity becomes abnormal, causing seizures or periods of unusual behaviour, sensations, and sometimes loss of awareness. Anyone at anytime can develop epilepsy but it tends to occur more frequently in younger and older persons.

Members of the public can assist with a seizure by cushioning the head of the person affected; loosening tight neck wear and turning the individual on his or her side. Refrain from putting any objects in the mouth or over the mouth of the person with the seizure; do not hold the person and look for any identification on the person.

Most seizures last approximately two minutes, however, if the seizure lasts longer than five minutes the patient should be transported to the nearest Hospital. After the seizure, offer help and look for any identification to contact next of kin.

Worldwide, approximately 50 million people have epilepsy, making it one of the most

common neurological diseases globally. It is estimated that up to 70 per cent of people living with epilepsy could live seizure-free if properly diagnosed and treated.