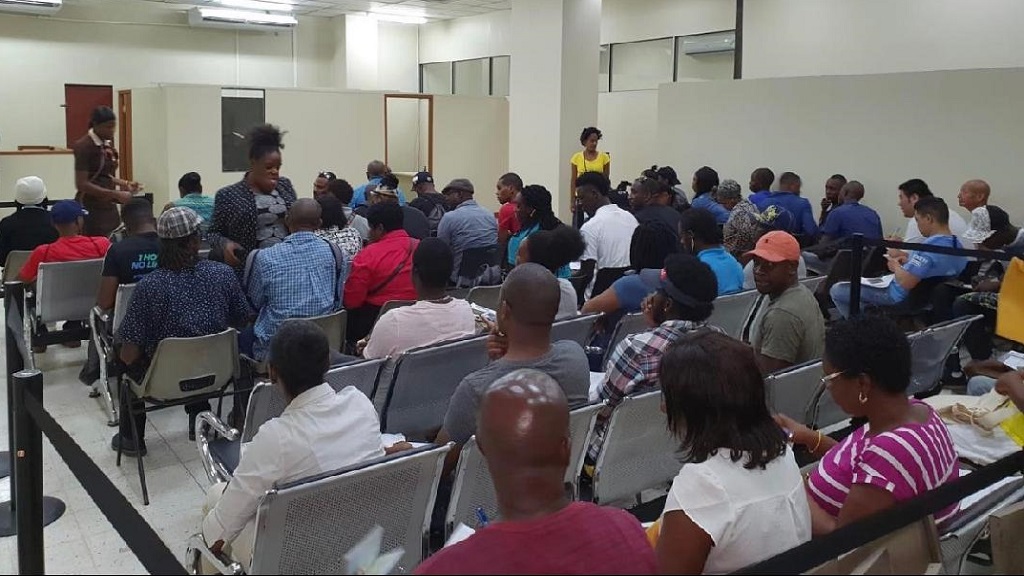 File photo of the Criminal Records Office in Kingston.

A major blunder by the Criminal Records Office (CRO) of the Jamaica Constabulary Force (JCF) has left a number of persons frustrated in their scramble to get hold of a police record, following the reopening of the office on Monday after a two-month closer due to the COVID-19 pandemic.

That blunder has also resulted in the JCF’s Scenes of Crime Office in Summit in St James being bombarded with calls by persons wanting to make an appointment for a police record. The development follows a statement last week from the JCF which indicated that the CRO would resume services as of Monday, June 1.

The statement mistakenly listed the 876-971-7241 number of the Scenes of Crime office in St James, for the Pompano Bay, St Mary CRO office where persons in that part of the island should call to schedule an appointment for a police record. This is after payment is made at the tax office.

“We tell them about the blunder, that they gave out the wrong number and they have done nothing about it,” an obviously frustrated policeman said when a Loop News reporter placed a call to the number on Thursday.

After being told about the difficulty persons were having scheduling an appointment after being unable to get through at several of the listed numbers for various parts of the island, the policeman suggested that Jamaicans were too passive.

“It’s because Jamaicans accept everything, they refuse to call the talk shows and make noise and expose the incompetence that is taking place,” he remarked.

While empathising with our reporter, the policeman said: “People need to talk up so those in authority can fix the problems. It is because people didn’t talk up why slavery lasted so long,” the obviously frustrated policeman added.

An advisory from the JCF last Friday instructed persons seeking to obtain a police record to make their payment at the nearest tax office as of June 1, before calling one of several listed numbers to share their receipt number and schedule an appointment.

The statement also indicated that there are limitations as to the number of applicants who will be accommodated at any one time – 150 each day at the Kingston and Montego Bay offices, and 100 at the May Pen and Pompano Bay offices.

However, persons, in particular in the Corporate Area who are anxious to get a police record for a job or emigration purposes, have been complaining that the phone lines have been ringing without answer.

When our reporter tried calling the 876-224-1011 number listed for the Kingston office, it rang constantly to voicemail. It appears messages left have not been cleared for sometime as callers are told that there is no space left to record a message.

The JCF statement indicating the resumption of services with “special arrangements and adjustments …to reduce the risk of the spread of COVID-19,” also stated that persons would be able to send text or Whatsapp messages when scheduling an appointment. However, there is no Whatsapp option on the listed Kingston number.

And the number that is listed for the Montego Bay office also rang to voicemail, however, the listed number for the May Pen location was answered. Our reporter enquired whether it was possible to schedule an appointment at the May Pen office if the person is living in the Corporate Area and was told this was not possible.

Meanwhile, one mother who is anxious to get her hands on a police record to facilitate the emigration procedure for her child has vowed to visit the Kingston office if she is not able to schedule the appointment over the phone.

“This is just foolishness. We have been calling since Tuesday morning and now it’s Thursday afternoon and we are unable to get through. I intend to go to the office soon,” the irate mother told Loop News on Thursday.

In the meantime, the equally frustrated policeman at the St James Scenes of Crime office conceded that they have no choice but to answer the telephone. “It could be a crime. It could be a murder. We have to answer but I hope they fix the problem soon,” he said.