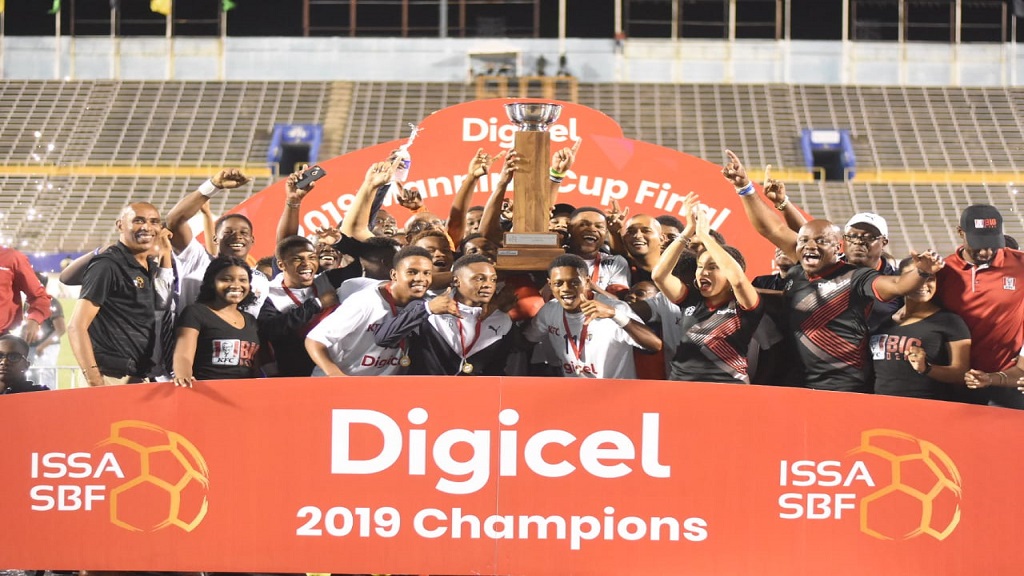 Jamaica College players, officials and representatives of the sponsors celebrate with the ISSA/Digicel Manning Cup after defeating St Andrew Technical High School (STATHS) 5-4 in a penalty shoot-out in the final on Friday, November 29, 2019 at the National Stadium. (PHOTOS: Marlon Reid).

Jamaica College (JC) were crowned the top urban area schoolboy football team for 2019 after defeating St Andrew Technical High School (STATHS) 5-4 on penalties in the final of the ISSA/Digicel Manning Cup football competition at the National Stadium on Friday night.

The dreaded penalty kicks were required to decide the winner after the teams battled to a 0-0 draw at the end of regulation time.

At the end, JC secured their sixth Manning Cup title in seven years and their 30th overall, two years after the Old Hope Road-based team also defeated STATHS in a penalty-shoot-out for its fifth straight victory.

It was the third appearance in the final for STATHS since the Bumper Hall-based school won its only Manning Cup title in 1987.

Goalkeeper Tarique Barrett, who was brought on for the penalty shoot-out, set up the victory for JC by saving Tyrese Smith's spot kick, the final one for STATHS.

Substitute Tajay Grant then sealed the victory for JC when he hammered past goalkeeper Ricardo Laing to hand the Dark Blues championships honours two weeks after they were on the brink of elimination at the quarter-final stage.

Tyrese Small, substitute Oquassa Chong, Omar Thompson and Phillon Lawrence were the other players who scored for JC from the spot.

JC were also involved in a third penalty shoot-out, this time losing 3-2 against KC in the semi-final of the ISSA all-island Champions Cup on November 16.

The Manning Cup final though rarely touched the heights of a blockbuster game with both teams playing very cautious.

Lawrence was fed a through ball from Omar Thompson in the fourth minute and with goalkeeper Ricardo Laing at his mercy in the 18-yard box he shot wide of the target.

Moments later, Lawrence then turned provider and presented Small with a chance in the box but the striker wasted a glorious opportunity in a one-on-one situation with Laing.

STATHS almost got the opening goal in the 56th minute when Romario Campbell poked a ball around the goalkeeper on the edge of the six-yard box, which was cleared just inches away from the goal line by Nickache Murray

Six minutes after, STATHS breathed a sigh of relief after Shadane Lopez arrived late at the far post after Murray headed a ball out of the reach goalkeeper Laing.

The defeat was the first for STATHS in the competition this season. They ended the season with 14 victories, two draws and a defeat from 17 games.

JC will now turn their attentions to the season-ending Olivier Shield on Saturday, December 7 where they will play the ISSA/Wata daCosta Cup winner.

Defending champions Clarendon College and Dinthill Technical will contest the daCosta final on Saturday at Catherine Hall in Montego Bay at 5:00 pm.