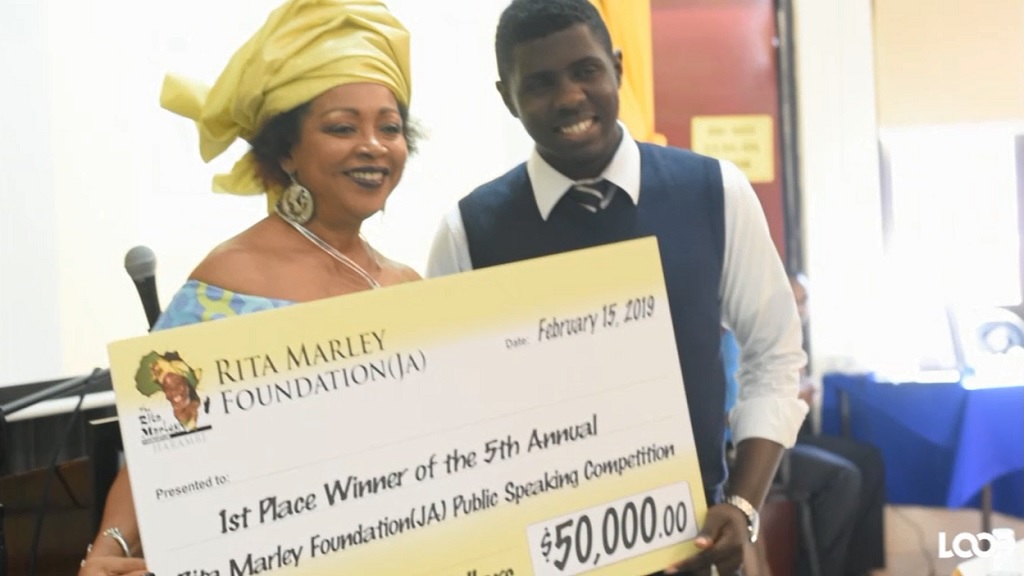 Winner of the 2019 Rita Marley Public Speaking Competition, Fabian Morris, was awarded the main prize of $50,000. Sharing in the moment is a judge in the competition, UWI lecturer, Professor Verene Shepherd.

Fabian Morris, a lower sixth form student of Jamaica College, impressed a capacity-filled Main Library at the University of the West Indies, to win the Rita Marley

He pocketed the main prize of $50,000 as he was judged to be the best speaker among his high school peers, with Wendy-Ann Ivey of Westwood High finishing second and Loreno Eschoe of Immaculate Conception High third.

Ivey, whose school applied after the deadline for entry but was allowed to compete, got $25,000 with Eschoe getting $15,000.

All three students received Bob Marley merchandise, as well as gift vouchers, with all the semi-finalists receiving a basket from Wisynco.

Morris said he was shocked to have won the competition, as he believed the presentations of the other speakers were excellent, but he was able to win the judges' favour by being a natural speaker.

Check out the video edited by Marlon Reid for highlights

"I can only give God thanks because it is him basically made me speak from my heart. I think that it is simply that. I really never refer to my paper much, I just spoke from how I was inspired, from the research that I have done and I was like having a conversation and not really giving a speech, but more like conversing with my fellow people,” he said.

One of the judges of the competition, Professor Verene Shepherd of the University of the West Indies, said the speakers in this year's event was of a high standard with Morris separating himself from the others by his delivery and content.

Shepherd said: "the winner had a great delivery style, confidence, poise, the delivery and above all the content and the interpretation of the topic, I think he was outstanding in all those areas."

Shepherd who lectures social history and one of the leaders fighting for reparation for the Caribbean region was happy that the competition gave the island's youth the ability to research and articulate the topic, including the CARICOM 10-point action plan, which was used in some of the speeches.