St Andrew Technical High's Walker Brown wins a header ahead of Jamaica College's Carrington Baker (left) and Jonoi Williams (right) during their quarter-final round match of the ISSA/Digicel Manning Cup competition on November 12 at the Stadium East field. STATHS won 2-1. Both teams face off on Friday, November 29 in the final. (PHOTOS: Marlon Reid).

The top urban area schoolboy football team for 2019 will be decided on Friday when Jamaica College (JC) and St Andrew Technical High School (STATHS) meet in the final of the Inter-Secondary Schools Sports Association (ISSA)/Digicel Manning Cup football competition inside the National Stadium at 5:00 pm.

The match will be a repeat of the 2017 final, which JC won to claim five straight titles and their 29th overall, the most by any school.

This will be the third appearance in the final for STATHS since the Bumper Hall-based school won its only Manning Cup title in 1987.

STATHS could start favourite in their quest for a second Manning Cup title and will be boosted by the fact they defeated JC 2-1 during the quarter-final round of the competition.

The quarter-final round of the competition had two groups of four teams each and the first and second-placed teams in the groups earned places to the semi-finals.

STATHS and JC were in the same quarter-final group.  STATHS emerged from the group with a maximum of nine points, while JC could only secure a meagre two points and qualified for the semi-finals courtesy of a minus one goal difference ahead of last season's beaten finalists St George’s College, and Excelsior High. 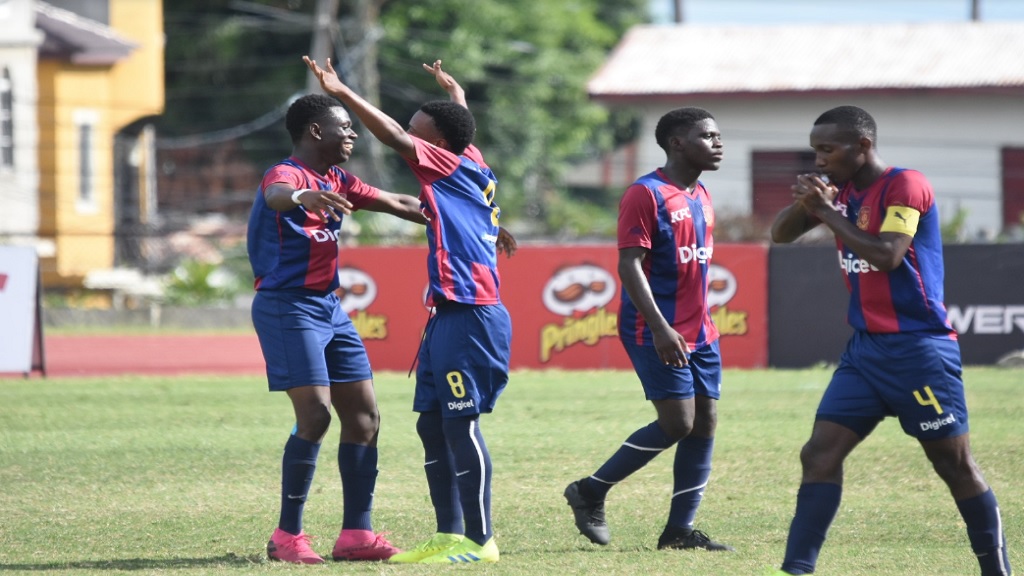 Mikel Riley (second right) of STATHS celebrates his goal with teammates during their quarter-final match against JC at the Stadium East field.

The performance of the Old Hope Road-based school at the quarter-final stage showed that JC’s passage to the championship match was not a smooth one. STATHS, on the other hand, raked up an unbeaten record in the competition this season with 14 victories and two draws from 16 games. During that run, STATHS rammed in 53 goals and conceded six. The only blemish for STATHS this season was a 2-1 defeat against Clarendon College in the first round of the all-island Champions Cup knockout competition.

JC played 18 games in the competition on their way to the final. Of the 18 games, JC secured 13 victories, four draws and a defeat. But after scoring 54 goals in their opening 12 games, JC struggled to find the back of the net since and this almost cost them as in the quarter-final round they scored two goals from three matches and conceded three. During that same period, STATHS scored nine and conceded twice.

Both teams had to dig deep to get out of the semi-finals with both games decided from the penalty spot.

And based on the semi-final results, JC could be the team to beat on Friday as they ended the run of the impressive Kingston College (KC) team courtesy of a 5-4 penalty shootout victory.

The victory for JC set the stage for a new champion, a year after KC defeated North Street neighbours St George's College 3-2 in a dramatic finale to win urban area biggest schoolboy football prize for the first time in 32 years.

The victory was sweet revenge for JC, which lost 3-2 in another penalty shoot out with KC in the all-island Champions Cup Knockout final the previous week.

This means that JC will be appearing in two finals this season.

STATHS defeated Wolmer's Boys 4-2 from the penalty spot in the other semi-final game to qualify for their second final in three years.

The stage is now set for an interesting final, but JC have the edge based on the school’s appetite for striking on the big occasion.

Before the Manning Cup final, St Catherine High will battle Excelsior High in the Walker Cup knockout final at 2:30 pm.

JC qualify for Manning Cup semis despite defeat to STATHS