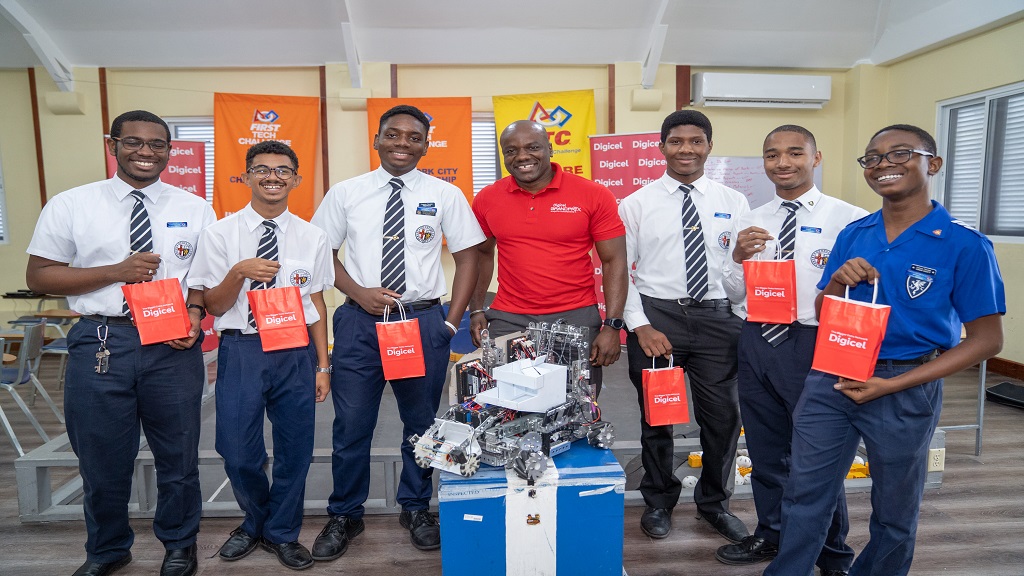 A group of eleven students from Jamaica College (JC) who were ranked best at building their own robot are now in the USA gearing up to compete against their peers from across the world.

JC won the local leg of the inaugural FIRST Tech Challenge National Robotics Championships in March after emerging ahead of other top high schools.

Now qualified for the space-themed FIRST Tech Challenge World Championships, dubbed ‘Rover Ruckus’ to be held in Houston, Texas from April 17-20, 2019, the JC boys will vie for the prestigious Inspire Award which provides opportunities for them to secure scholarships from local and international universities.

Members of the winning team received smartphones courtesy of Digicel and were also among the first to be signed up for the company’s new ‘Hit the Ground Roaming’ plans, now available in over 60 countries - featuring lower call rates, free incoming calls, generous allotments of bundled minutes and up one gigabyte of data.

Now in Texas, the students and their teachers have already been able to make and receive calls, send photos and videos to friends and family back home.

Commenting on the prize offered, Public Relations and Communications Manager for Digicel, Elon Parkinson, said, “We are proud to be supporting Jamaica’s young innovation ambassadors and we wish them all the best as they compete against some of the brightest minds from across the world. Being able to stay connected and to share their journey in Houston is very important to the team members, and we are happy to that our new roaming plans give them the right amount of minutes and megabytes to do so.”

In thanking Digicel, Principal of Jamaica College, Wayne Robinson, shared, “It’s a good fit and Digicel has been a good technology partner to us. Giving the boys access and phones means that even while they’re on the road travelling they can use mobile data to send back all the lovely pictures.”

Digicel is focused on expanding opportunities for STEM (Science, Technology, Engineering and Mathematics) learning in schools across Jamaica.

Prior to this, the Digicel Foundation opened its latest renovated science lab at the St. Catherine High School.

“There’s an incredible amount of local talent poised to do great things. With this in mind, our mission is to support the development of Jamaica’s next generation of innovators who will be pivotal to the transition to becoming a digitally-connected society,”

The young engineers were tasked with building a robot that would navigate a playing field while moving objects from one place to the next within a specified period of time. They also had to make a full presentation to judges on how they moved from idea to prototype.

JC’s battery-powered robot, controlled by smartphones and onboard sensors, was able to mimic how space robots move objects from one location to another, at times on their own.

National robotics championship on Thursday and Friday at JC

Eppley stock to spike at opening of trading on Tuesday