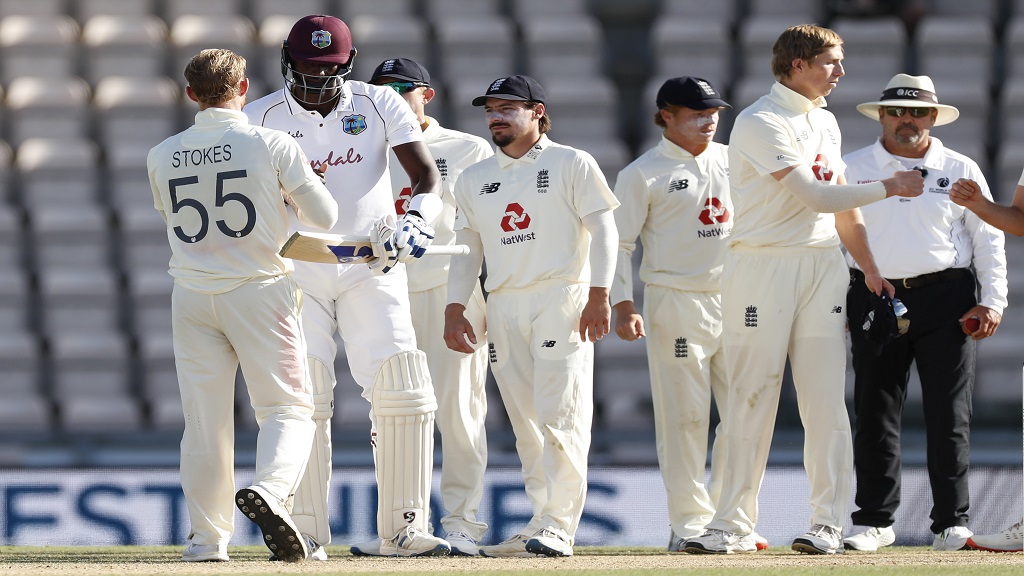 Jason Holder was surprised when England left out Stuart Broad for the first Test of their three-match series against his West Indies side.

The Windies won a close opening contest by four wickets, with a crucial 95 from Jermaine Blackwood helping the tourists get over the line on day five.

Broad, who has 485 Test wickets and impressed in South Africa at the end of last year, was left out of the line-up in Southampton by stand-in captain Ben Stokes.

Stokes also elected to bat first in overcast conditions, a move that came under scrutiny after England managed just 204 in their first innings.

West Indies captain Holder thought Broad would have played instead of either Jofra Archer or Mark Wood and was happy when Stokes opted to bat after winning the toss.

"This is a proud moment for us," Holder said in a column for the Daily Mail. "We really wanted to start this Test series well and to begin the way we have by winning the first Test is perfect.

"Looking back at the game, it was my preference to bowl first so I didn't mind England deciding to bat, and then our bowlers simply bowled their hearts out on a pretty flat pitch.

"I was a little surprised England didn't pick Stuart Broad.

"His record, particularly in this country, is outstanding and I thought they would leave out either Jofra Archer or Mark Wood. But they put out a high-quality attack, that's for sure.

"As it went on it became close to the complete West Indian performance. There's no doubt the game-changer was that fourth afternoon when we took five wickets after tea.

"Then we were able to finish it off on the last day. It's been a while since we had Shannon Gabriel on the park due to injury so to see him back firing on all cylinders was brilliant.

"We were always confident we would get 200 to win but losing three quick wickets and John Campbell to injury wasn't ideal.

"But the partnership between Jermaine Blackwood and Roston Chase was just what we wanted and it was really good to see Jermaine going as deep as he did.

"This was a career-reviving innings for Jermaine. He's a very exciting player and he grabbed this opportunity with both hands."

The second Test at Old Trafford, for which Joe Root will return as the hosts' captain following the birth of his second child, starts on Thursday, with West Indies knowing they will retain the Wisden Trophy if they avoid defeat.