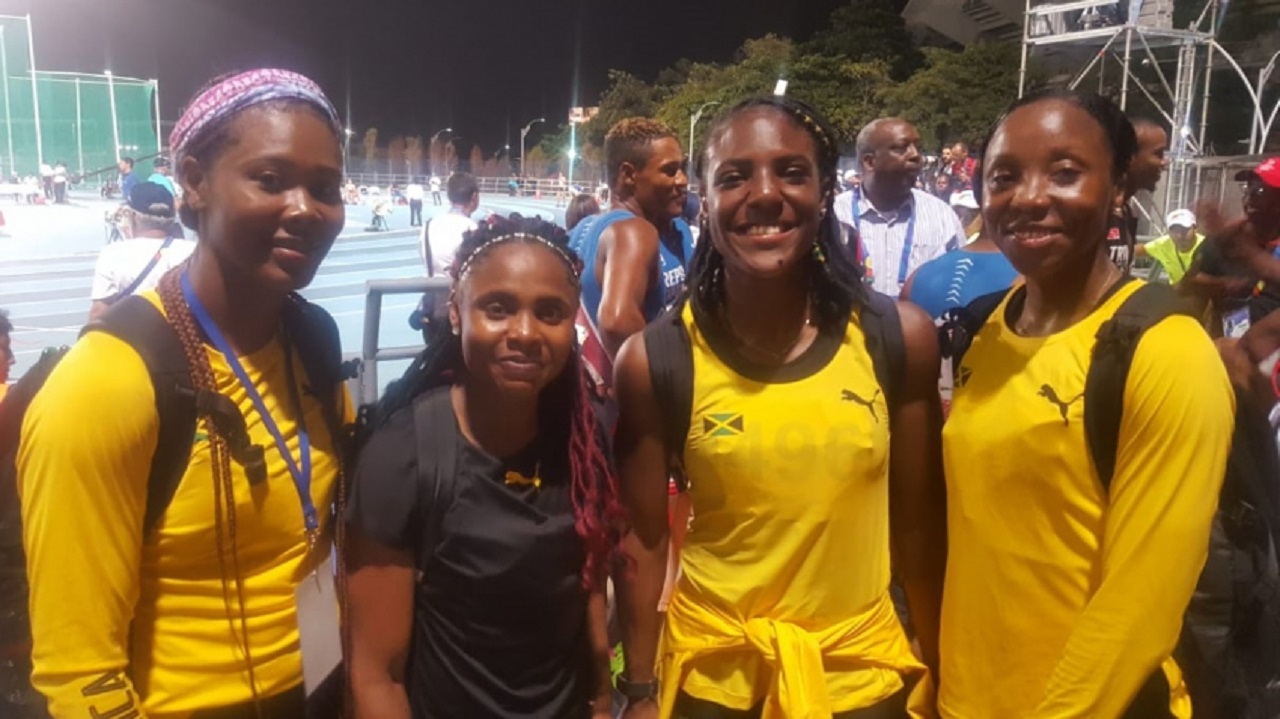 Nastasha Morrison, Jura Levy, Jonielle Smith and Sherone Simpson pose for a picture after winning the women's 4x100m gold medal at the CAC Games in Colombia on Thursday night.

Jamaica rounded off its best performance ever in the history of the  Central American and Caribbean (CAC) Games with another three medals on Thursday night in Barranquilla, Colombia.

The three medals on the night all came in the relays and those performances were led by a golden run from the women's 4x100m relay team.

As a result of the three medals, Jamaica finished eighth on the gold medal table with  12 gold, four silver and 11 bronze for a medal haul of 27.  Eight of the country´s 12 gold medals won at the Games have been achieved in athletics.

Jamaica's third and final medal was secured by the women's 4x400m team, which finished behind Cuba for silver. The quartet of Junelle Bronfield, Derri Hill, 400m champion Tiffany James and Sonikqua Walker clocked 3:30.67 for their second place.

Gilda Casanova, 400m bronze medallist Zurian Hechavarria and 800m winner Rose Mary Almanza ran three solid legs before anchor Roxana Gomez made her move on the homestretch to lead Cuba to the victory in a Games Record 3:29.48. Host country Colombia finished third for the bronze in 3:32.61.

In the process Almanza became the only athlete to win three athletics golds following her victories in the 800m and 1500m.

Jamaica failed to complete the men's 4x400m relay final as Cuba took the double having won the women's race earlier.

Yoandys Lescay held off Colombia and the fast finishing Dominican Republic to defend the crown won in 2014. Raidel Rojas, Adrian Chacon and Leandro Zamora were also on the squad.

Earlier, Jamaicans Jordan Scott leapt a personal best 16.82m in the men's triple jump final but the effort was only good enough for fourth place. Odaine Lewis, the other Jamaican in the field, finished 11th and last with with an effort of 15.34m.

In the women's high jump final, Jamaica's Saniel Atkinson-Grier cleared 1.82m for fifth place as St Lucia's Levern Spencer was the only jumper in the 13-woman final to clear 1.90m to claim a third title after victories in the 2010 and 2014 editions of the Games.