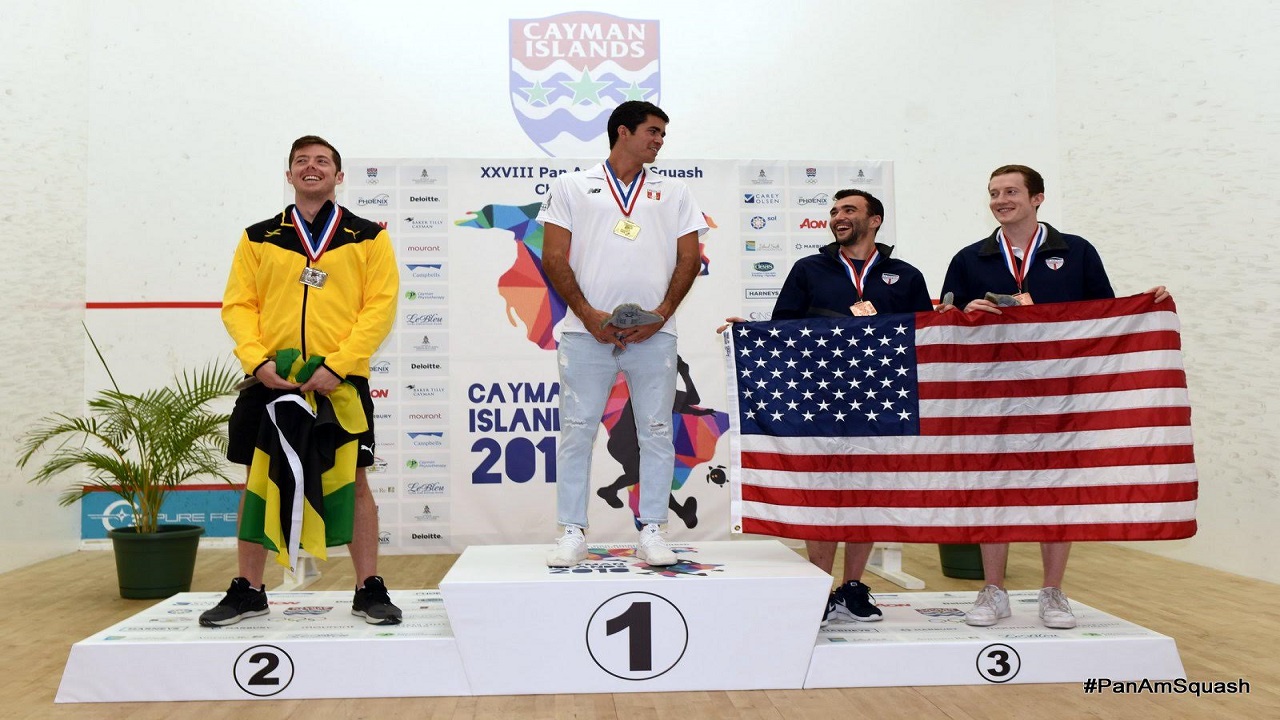 Chris Binnie (left) at the medal ceremony after his historic silver medal win in the men’s singles competition at the 2018 Pan American Squash Championships, which wrapped up over the weekend in the Cayman Islands. Sharing in the moment are the gold medal winner, Diego Elías, (centre) and American players Todd Harrity (far right) and Chris Hanson, who shared bronze.

It was mission accomplished for Jamaica as the senior national men’s team emerged from the 2018 Pan American Squash Championships having qualified for the prestigious 2019 Pan American Games following a silver medal win in the men’s singles event, courtesy of Chris Binnie.

The team, which consisted of the top four local players, Binnie, Lewis Walters, Bruce Burrowes and Julian Morrison, finished in eighth place at the championships, which wrapped up over the weekend in the Cayman Islands.

Jamaica made the top eight after surviving a tough competition draw, which saw them beating regional rivals Guyana 3-0 to reach the quarter finals where they lost to 2-0 to eventual champions, Mexico.

Following the loss, the Team contested the 5th – 8th place draw, where they lost 3-0 to Brazil and 2-0 to Argentina to finish eighth.  While not in medal contention, the Jamaicans established themselves among the top 12 teams in the Americas and will now do battle at the Pan-American Games scheduled for next July and August in Lima, Peru.

The team’s qualification followed on Binnie’s historic silver medal win in the singles draw as Jamaica continues to make a name for itself in international squash.

“The boys did exactly what they went to Cayman to do, qualify to play at the Pan American Games next year and earn the right to be counted among the best teams in the Pan-American sporting region,” said Chris Hind, President of the Jamaica Squash Association.

“We have a lot to be proud of with Chris Binnie beating high ranking international players to place second and the team, overall, stepping up their game to have a solid showing in such a competitive arena; and now, we’ll redouble our efforts to ensure we do even better at the Games next year.”