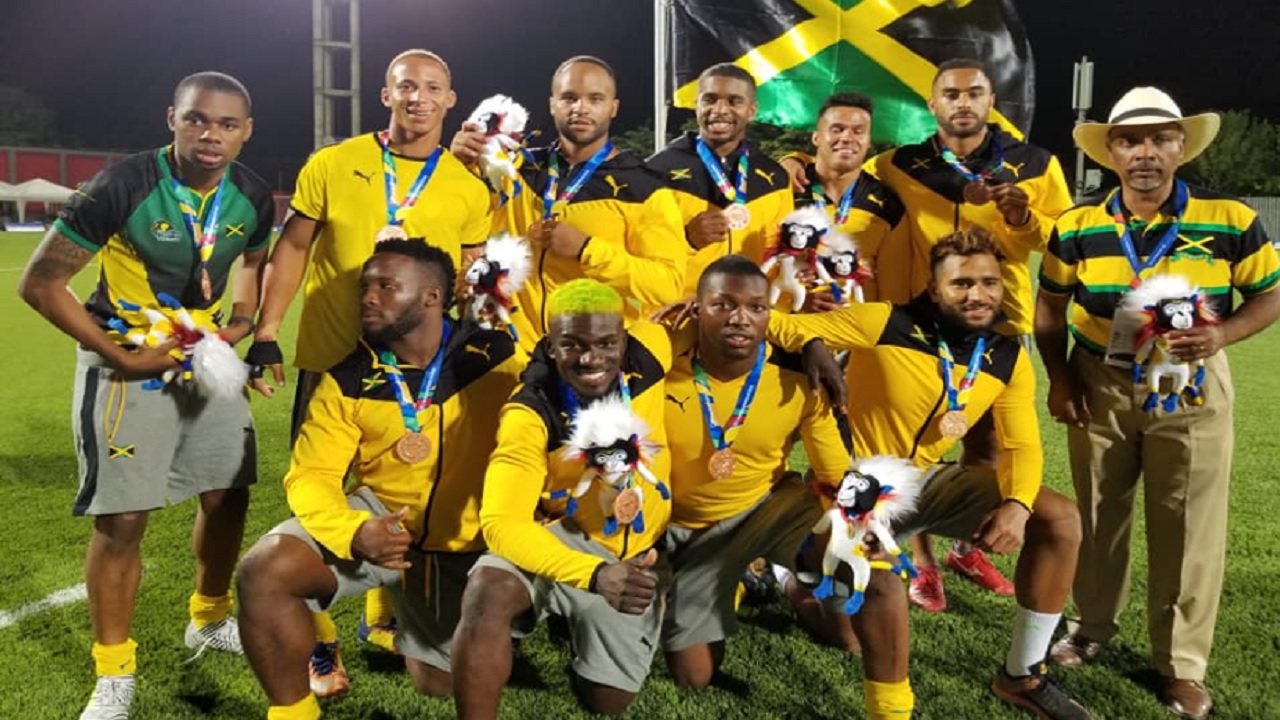 Jamaica’s athletes have long established themselves among the fastest in global track athletics.

To become another all-conquering force, the country’s rugby seven men’s outfit is looking to strike a parallel by infiltrating it ranks with more speed.

This follows their crowning as undisputed kings of Caribbean rugby, with a bronze-medal finish at the recently-concluded Central American and Caribbean (CAC) Games in Barranquilla, Colombia, after defeating Trinidad and Tobago 26-5 in the bronze medal play-off match on Thursday, August 2.

According to coach Bruce Martin, a large part of that success owes itself to the addition of Warren Weir, a high class sprinter who has won Olympic bronze at 200m and sprint relay gold, plus World Championship and Commonwealth Games 200m silver.

“The addition of Warren Weir is great, he saved us in so many ways; tackling, we didn’t know that his tackling skills was on par like that, he rose to the occasion,” said Martin. “His speed is excellent for where we’re going and I’m excited to see how far we’ll reach coming onto the qualifications leading to the 2020 Olympics.”

“His contribution, the entire world of rugby is already raving about him, already crowning him as the fastest rugby player in the world and so far he has opened up space for us,” Martin said.

Of course, there other characteristics that contributed to Jamaica’s CAC achievement.

“We were supposed to use 12 players, we used 11. Another player got injured so we fell down to 10 players,” Martin admitted, pointing to the very first match, which they won 29-12 against Guatemala.

The Reggae Crocs, as they are called, suffered a group stage 7-17 loss against Trinidad and Tobago, but won 29-0 against Venezuela and 15-10 against Guyana in the quarters. In the semis, Jamaica found Colombia too much to handle and lost 0-26.

“It’s all heart, passion, pride. These boys are hungry for it, they want it and we’re trying to change a culture, we’re trying to make Jamaica understand that Jamaica rugby is for real and we can go places. It’s an Olympic sport. We’re the first Caribbean country to qualify for the World Cup and we finished number one at the CAC Games,” said Martin.

“We’re the king and queens of the Caribbean. Our female team didn’t win a medal but they’re the top team in the Caribbean,” he added, of the women, who beat Guatemala 41-5 for fifth.

President of the Jamaica Olympic Association, Christopher Samuda, weighed in on their brave achievement.

Samuda said: “The bronze success of our rugby national team in the CAC Games will go down in Jamaica's sporting annals as an act of exemplary courage, fortitude and commitment to country. Our men never surrender on the turf. They may encounter disappointments, but those very disappointments challenge them to transcend.

“It has made me very, very proud to be a Jamaican - a son of the rock. The dream became a reality, which will no doubt inspire tomorrow's rugby generation of Reggae Crocs," he said of Jamaica’s second CAC men’s rugby bronze, following the ground-breaking 2010 success in Mayaguez, Puerto Rico.

Their ambitions though, run deeper, marked by a target of qualifying for the Tokyo Olympics in 2020.

That route leads through Barbados, where the Pan Am qualifiers will be held next month, plus an Olympic qualifier next year.

“To go to the Olympics we’ve got to play a qualification next year, September 2019 and so far we’re trying to put players together,” said Martin.

Olympic qualification though necessitates additional resources, one of which Martin outlined to be speed. In the sprint capital of the world, that is gettable.

“So far we’ve Warren Weir come over and we’ve more track athletes coming over. Once we get four track athletes who want to learn the game, we’re here to get them ready and I see Jamaica in the Olympics,” said Martin.

“That’s what the USA rugby is doing, the same thing,” he noted. “They take track athletes, bring them over, teach them rugby and they made the last Olympics. We’re following that path because naturally we’ve the fastest people in the world in Jamaica.”