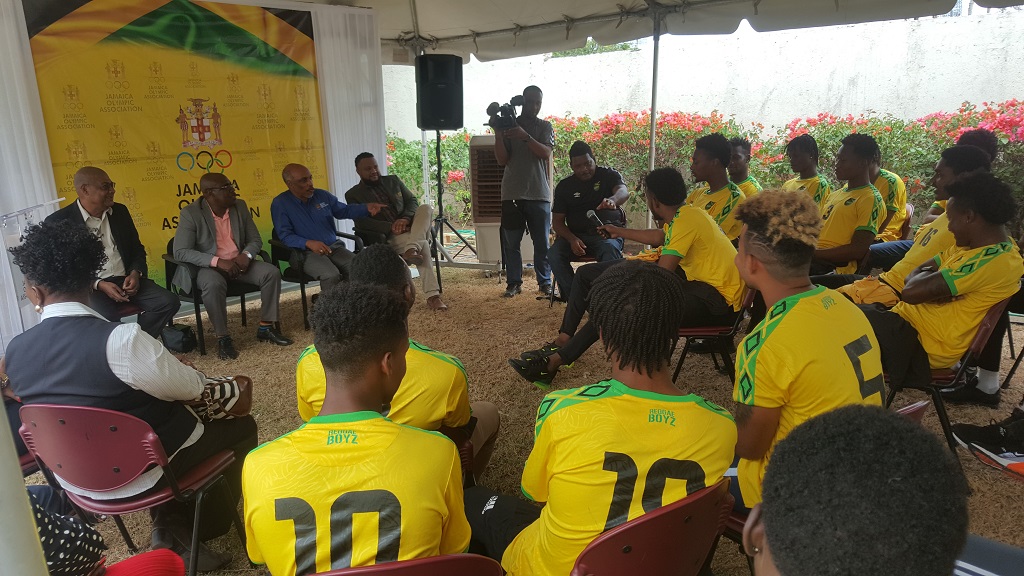 Jamaica’s Under-23 men's football team at a recent Motivational Talk hosted at the JOA headquarters, Olympic Manor on Cunningham Avenue in Kingston.

Jamaica’s Under-23 men's football team will seek to deliver on the urgings of ‘validation’ from the Jamaica Olympic Association (JOA), when they launch into preliminary competition against Honduras at the Pan American Games in Lima, Peru, on Monday, July 29, beginning at 5:30 p.m. (same time in Jamaica).

The Reggae Girlz, who created history in becoming the first Caribbean women’s team to play at the FIFA World Cup, bow into action on Sunday against Mexico at 10:00 a.m. All matches will be played at Lima’s San Marcos Stadium.

Following their disastrous Caribbean Zone elimination at home after failing to beat lowly Dominica and St Kitts and Nevis, this represents their only chance of qualifying for the 2020 Olympic Games.

Only the top two will qualify.

At a recent Motivational Talk hosted at the JOA headquarters, Olympic Manor on Cunningham Avenue in Kingston, President of the JOA, Christopher Samuda, told the Under-23 men’s team that the country’s apex body for sports is “fully” supportive of their efforts and strongly encouraged “validation”.

The task of qualifying will be difficult, as after playing against Honduras on Monday, the national Under-23 men’s team will face Uruguay on Thursday, August 1, at 5:30 p.m.; and play hosts Peru on Sunday, August 4, at 8:30 p.m.

No Jamaican football team has ever qualified for the Olympic Games, but Samuda, whose administration has been making trendsetting moves in international competitions in participation, medals, and sponsorship, among other things, is confident this group will break the ice.

“So they will be making history when they go to Tokyo,” he said. “But more importantly for us is self-validation of the boys, of the gentlemen who are representing the country and also for them to be examples of others who are going to follow. So history will be made, but what we’re saying is make it with meaning and by doing so create an example for future generations,” reinforced Samuda.

"The Olympic qualifiers are historic for JFF and JOA, and we are big on building legacies. For far too long we have not been bold enough to dream to be part of history, not just as passengers, but as drivers of the dream,” Foster implored.

“One year ago we took the decision to partner with JFF to provide that financial and leadership support to develop an Olympic team that is competent enough to make history. Our support this far has been over $15 million and we see it as a step in the right direction.”

Foster added: “Thus far we have had the most successful CAC, Commonwealth Games and now the largest PanAm Games contingent of 19 sporting disciplines. We have spent in excess of $250 million in the last 12 months, which is unprecedented, but we have seen the results. We wish these boys all the success and encourage them to be bold, be committed and most importantly, be passionate about their dream."

The Reggae Girlz will be competing side by side with their male counterparts and after their opening encounter on Sunday, they will play Colombia on Wednesday, July 31 at 1:00 p.m., before tackling Paraguay on Saturday, August 3 at 1:00 p.m.

“We’ve had strong support from the JOA and I must use this opportunity to express my highest regard and must say thanks to President Samuda and CEO/Secretary General Foster. They’ve developed a bond, a kind of alliance with the JFF and we’re eternally grateful for that. Partnering with the JOA has certainly been a catalyst for our football programme and we’re just hopeful that when we go to the Pan Am Games we can earn a medal,” said Ricketts.

He added: “We are on a path to creating history. Never in the history of football in Jamaica have we qualified for the Olympic tournament. It is a challenge. It is not easy to qualify for the Olympics; only two teams from Concacaf will actually go through, so it is going to be tough,” Ricketts pointed out. “But we are up for the challenge.”

Unlike the men's teams at the tournament, the women's teams are without age restrictions. Brazil is the defending gold medalist, but will not be participating in the Games.