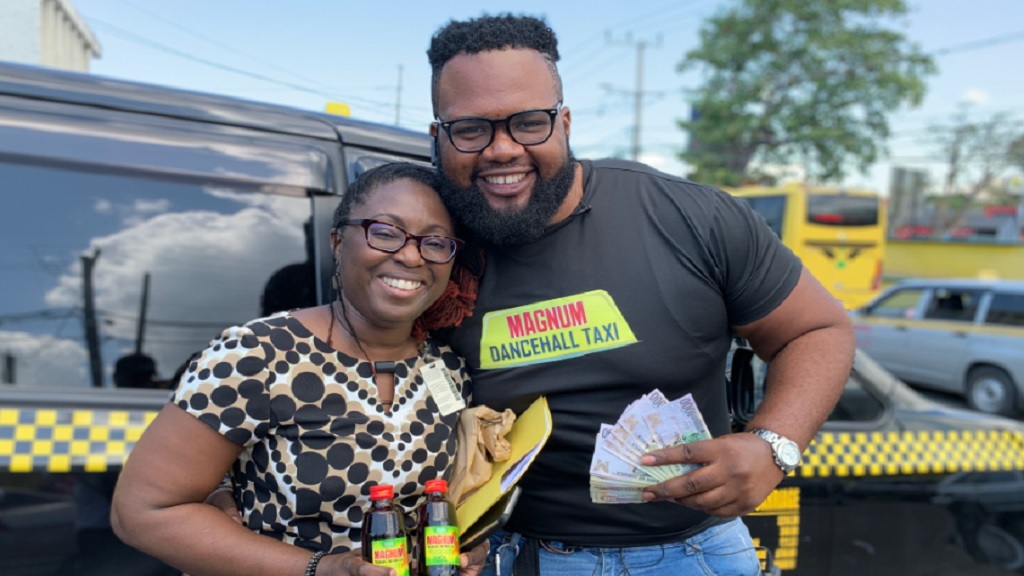 The show is exclusive to MagnumHub.Tv, a new online portal for dancehall encapsulating music, dance, and the culture. It is a comedic spin on dancehall trivia bringing unsuspecting local commuters into a fun experience which challenges their knowledge of popular culture.

Tripple X outlines the rules of the game to commuters over 18 years of age who are picked up in the cab.  Participants are asked a series of questions during a short ride and, at the end, points are tallied and the passenger is given a prize based on their results. The show gives participants an opportunity to sharpen their knowledge of the dancehall including music, dance, personalities, history and current events, with a chance to win prizes including Magnum Tonic Wine, gift vouchers and cash.

Anna Perkins, a winner in the Magnum Dancehall Taxi, won all of $13,000 on a short 15-minute ride on a taxi from Liguanea to Papine.

She professes her love for the music and admits that it is a subject that she has researched.

“I am a fan of dancehall, I work at UWI and I do research and from time to time I do write stuff on dancehall. My sort of dancehall thing is highly theoretical, so I bombed on a lot of the current questions, I am not really up with the young people because when you look at the young people there is so much that is coming out and so many new artistes, it is just hard to keep on top of them," she said.

“Magnum Dancehall Taxi brings Magnum Tonic Wine into the streets and allows us to connect with consumers. It also allows us to showcase participants and put them on a screen for friends and family to root for them in a fun environment," she said.

Tripple X is having fun with his role as host and driver of the dancehall Taxi.

“Everybody loves money and everybody can do with an extra bit of cash, so the reception has been great. I was pleasantly surprised that persons of various demographics were interested in participating in a dancehall themed trivia when the production team ventured in the corporate area, including Papine, Half Way Tree and Liguanea,” he said.

The first season of Magnum Dancehall Taxi was released on Tuesday, May 7 and will featured 14 episodes.