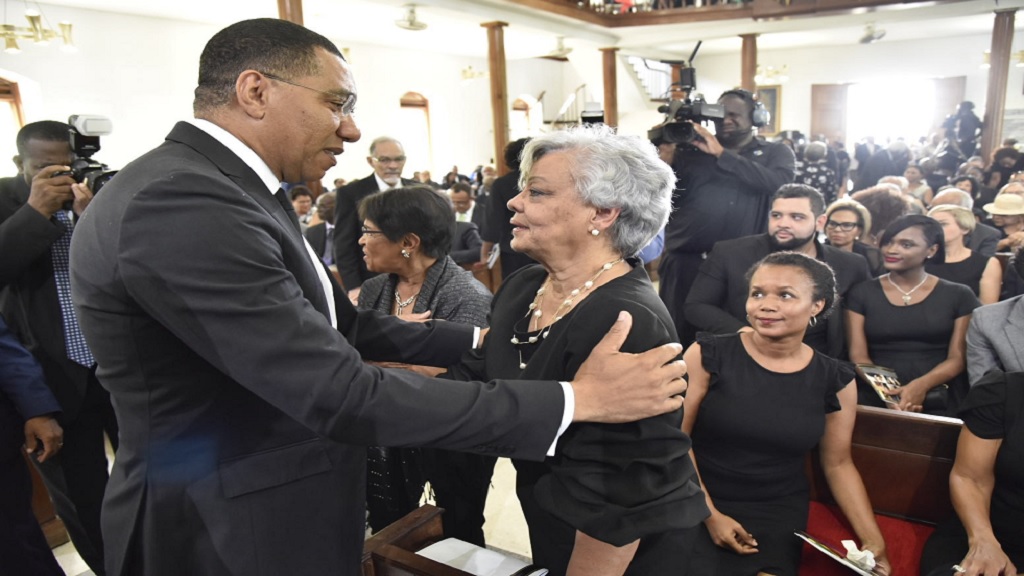 Prime Minister Andrew Holness offers condolences to Wilma Baugh, the widow of the late former Deputy Prime Minister, Dr Kenneth Baugh. Occasion was the Service of Thanksgiving for the life of Baugh at the University of the West Indies (UWI) Chapel, Mona on Thursday. (PHOTOS: JIS)

Jamaicans from all walks of life congregated at the University of the West Indies (UWI) Chapel, Mona, on Thursday, to pay their final respects to late medical doctor and statesman, Dr Kenneth Baugh.

The large throng of well-wishers spilled outside the halls of the chapel and into tents erected on the grounds, where they were able to watch the service of thanksgiving on monitors provided.

Governor-General Sir Patrick Allen and Prime Minister Andrew Holness headed the list of dignitaries in attendance, which included members of the Cabinet, former prime ministers, private-sector leaders, members of academia, among others .

The former deputy prime minister, who devoted 30 years of his life to public service, passed away on Sunday, September 1, at the age of 78. He was accorded an official funeral by the Government.

During the service, heartfelt tributes flowed in speech and song for Baugh, who also served as Minister of Health, Minister of Foreign Affairs and Foreign Trade, Senator, and Member of Parliament. 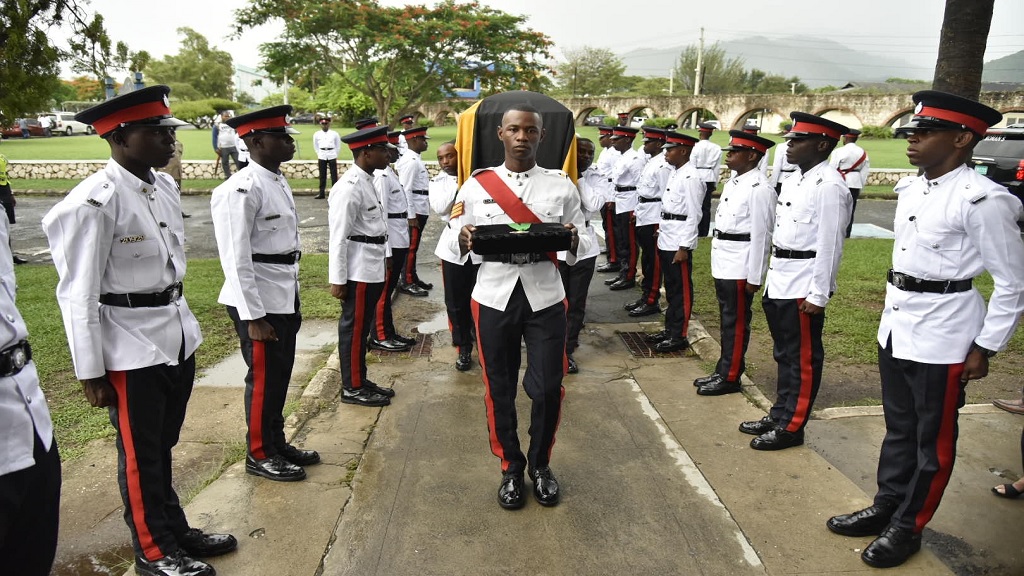 The Jamaica Constabulary Force’s (JCF) bearer party takes the casket bearing the body of former Deputy Prime Minister, Dr Kenneth Baugh, past the honour guard and inside the UWI Chapel, Mona on Thursday.

Violinist, Dr Jessica Yap, played ‘Could I Have This Dance,’ which was one of Baugh’s favorite songs to croon.

In a moving tribute to his colleague and longtime friend of 40 years, Minister with responsibility for Education, Youth and Information, Karl Samuda remembered Baugh as a “talented, caring and patient man of extraordinary honesty and integrity”.

“Ken was always a deep philosophical thinker, steeped in high principles and simple ordinary decency,” he said, while sharing fond memories of his varied interactions with Dr Baugh.

Baugh’s daughter Melanie said her father was “a great man” and was “the standard by which we measured everyone in our lives. He was the voice of reason, the quiet calm in chaos, the lighthouse in the storms of our lives”.

She said her father gave of himself “so unselfishly”, and would drop everything, to be there for his children.

“His humility in public was the same humility he displayed in private. He never cared if he never fit in. He never sought fanfare. He only sought the road that was honest and right,” she said.

Melanie also shared intimate memories of her father, noting that he loved to cook, planning meals well in advance, and had a “slight obsession” with keys that he would wear on his belt – and the bunch got bigger and bigger as the years passed.

Melanie said that her father found pleasure travelling throughout his constituency and learning about the people, and researching ways to bring productivity to communities.

“He knew them by name; he knew their needs. He ran school clinics, he tended to the elderly, never turning a patient away, whether they could pay or not,” she noted.

Melanie said her father focused on the “kernel of promise” in everyone he met, as he knew that in order to achieve, one had to be given a chance. “He took those kernels, he watered them, he nurtured them and he guided them with his unbending morals and faith,” she said.

“The people of Jamaica were his love; this country was his love,” she added.

“No matter what our stage or age in life was, he always had words of comfort and sage advice,” he said.

Baugh’s youngest child, Gregory, who was one of the officiating Ministers, said he saw his father as “a kind of superhero”.

“Throughout his life, he was often depended on to fix dire situations, whether it be medical, emotional, political or national. He always seemed to have the right answer,” he said.
“Daddy was a good man”, he added.

A Surgeon Specialist, Baugh was in 1976 appointed a Consultant in General Surgery at the Cornwall Regional Hospital, then Senior Medical Officer and Chairman of the Professional Committee of Doctors at that institution until 1980.

Prior to these appointments, he was a Senior Registrar in General Surgery and Cardiothoracic Surgery at the University Hospital of the West Indies (UHW1).

For his distinguished service to Parliament, public service and his contribution to medicine, Dr Baugh was conferred with one of Jamaica’s highest honours, the Order of Jamaica, in 2016.