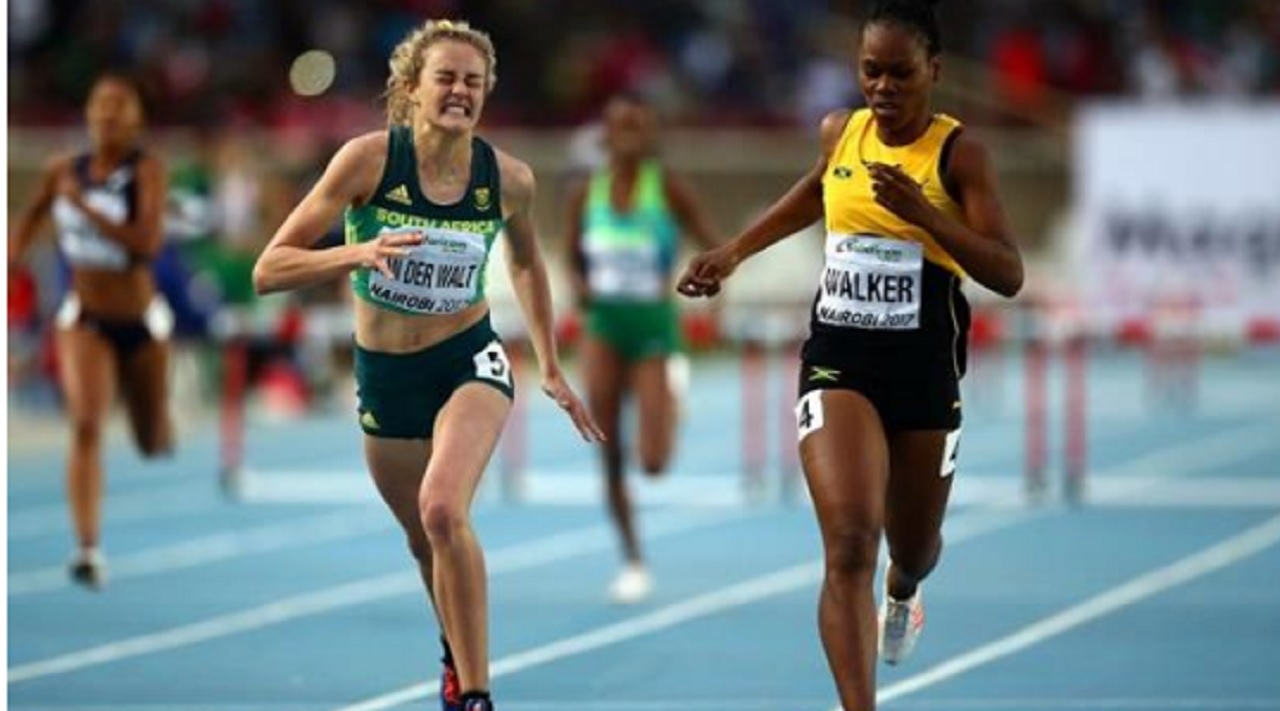 Pre-event favourite Jamaican Shanique Walker was denied the gold medal after hitting the final barrier in the girls' 400-metre hurdles final in the afternoon session on day four of the 10th and final IAAF World Under-18 Championships in Nairobi, Kenya.

South Africa’s Zeney van der Walt snatched victory in the dying yards from the Jamaican, 58.23 to 58.27.

It was the closest 400m hurdles final in history at the IAAF World U18 Championships.

Walker by far the fastest in the field, stamped her authority on the race over the first five barriers, entering the final turn with a five-metre advantage over her nearest pursuer: Van der Walt.

It appeared certain, at that point, that the lead was unassailable, that only a mishap or grievous mistake could stop Walker’s path to gold.

And then it happened. As she approached the final barrier, Walker clobbered it with her lead leg, knocking it to the floor. “My start was good but I lost concentration along the way,” said Walker. “It was worse when I hit the hurdle – that impacted on me.”

It was a mistake that drained all her momentum, though by the time she had recovered she still had a two-metre lead over the fast-finishing Van der Walt.

It wasn’t enough, the South African eating into the advantage with every step and getting by in the dying metres, the photo finish handing her the verdict by just 0.04 in 58.23. “I just kept pushing until the end because I had energy,” said Van der Walt. “I didn’t expect to win, so I’m very happy.”

Back in third, Germany’s Gisele Wender came through strongly to set a PB of 59.17 to earn her a place on the podium, while Lithuania’s Gabija Galvydyte had to settle for fourth with 59.49.

The silver represents the fifth medal for Jamaica at the five-day championships following two gold and two bronze.

Sprint hurdler De'Jour Russell and quarter-miler Antonio Watson won the gold medal for Jamaica on Friday, while sprinters  Kevona Davis and Tyreke Wilson secured the bronze medals in the 100 metres.

In the boys' 400-metre hurdles final, Jamaican Rovane Williams finished down the track. He crossed the line in 55.48 seconds for seventh place.

Zazini Sokwakjaja completed a sweep of the gold medals in the 400 hurdles for South Africa, winning the race in 49.27.

Earlier, Jamaican Xavier Naire failed to qualify for the boys' 200-metre final after finishing sixth in Heat 1 in 21.82 seconds.

In the morning session, Jamaican Britanny Anderson produced an easy 13.10-second clocking in the heats of the girls' 100-metre hurdles.

The 13.10-second clocking handed the Vere Technical athlete a comfortable victory in Heat 1 over Yoveini Mota (13.18, a personal best) of Venezuela.

The Jamaican will enter Sunday's final with second fastest qualifying time behind Cyrena Samba-Mayela of France, the fastest U18 girl in the world this year over the 100m hurdles, who bettered her own world lead to qualify fastest.

She clocked 12.98, a European U18 best and just 0.04 outside the world U18 best held by Jamaica's Yanique Thompson, leading the way as a total of 10 athletes improved their personal bests in the heats.

Jamaica will have two qualifiers in the medal round as Daszay Freeman progressed to the final with a personal best 13.07 in the third and final heat, which handed her second behind Samba-Mayela's world leading time.

Britanny Anderson, Daszay Freeman in medal round at World U18 Champs