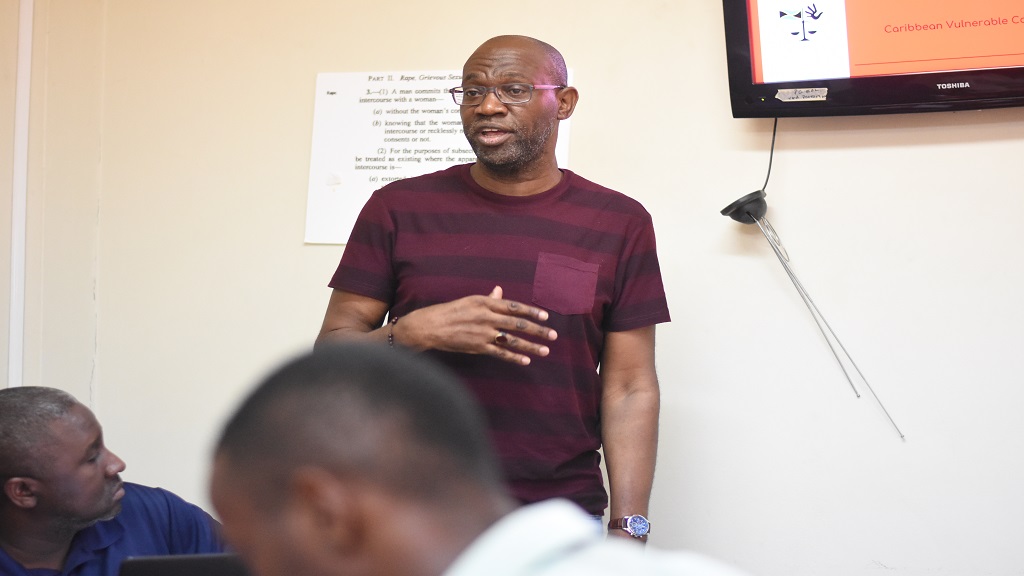 Executive Director of the Caribbean Vulnerable Communities Coalition, Ivan Cruickshank addresses journalists at a workshop to sensitise members of the press on gender-based violence.

Jamaican journalists were sensitised on gender-based violence in a session by the Caribbean Vulnerable Communities Coalition (CVC) at its Braemar Road, St Andrew offices on Friday.

The project was funded by the European Union (EU) as part of the Advocating for Justice programme and was conducted mainly by the CVC's project officer Monica Brown and communication officer Kaneal Gayle, with input from executive director Ivan Cruickshank.

The journalists were drawn from media houses across the island. They were selected by the companies they work.

Among the principles that gender-based violence violates are human beings being born free and equal in dignity and rights; everyone having the right to life, liberty and security; and no one being subjected to torture or to cruel inhumane or degrading treatment or punishment.

In her presentation, Brown said that gender-based violence has a psychological, emotional and financial effect on the victims, who are mainly women and girls. She said that it is normally associated with unequal power based on societal norms.

According to Brown, gender-based violence undermines victims' health, dignity, security and autonomy and is often shrouded in a culture of silence. Victims, she said, often suffer sexual and reproductive health consequences, including forced and unwanted pregnancies, unsafe abortions, sexually transmitted infections including HIV and sometimes death.

She said that Jamaica has 51 per 100,000 reported cases of gender-based violence with many having the notion that men have the right to control women's behaviour and discipline them, or that there is justifiable cause for the violence. She said that victims are blamed.

Brown said that intimate partner violence takes place in all settings in all socioeconomic, religious, ethnic and cultural groups with the perpetrators being partners and ex-partners.