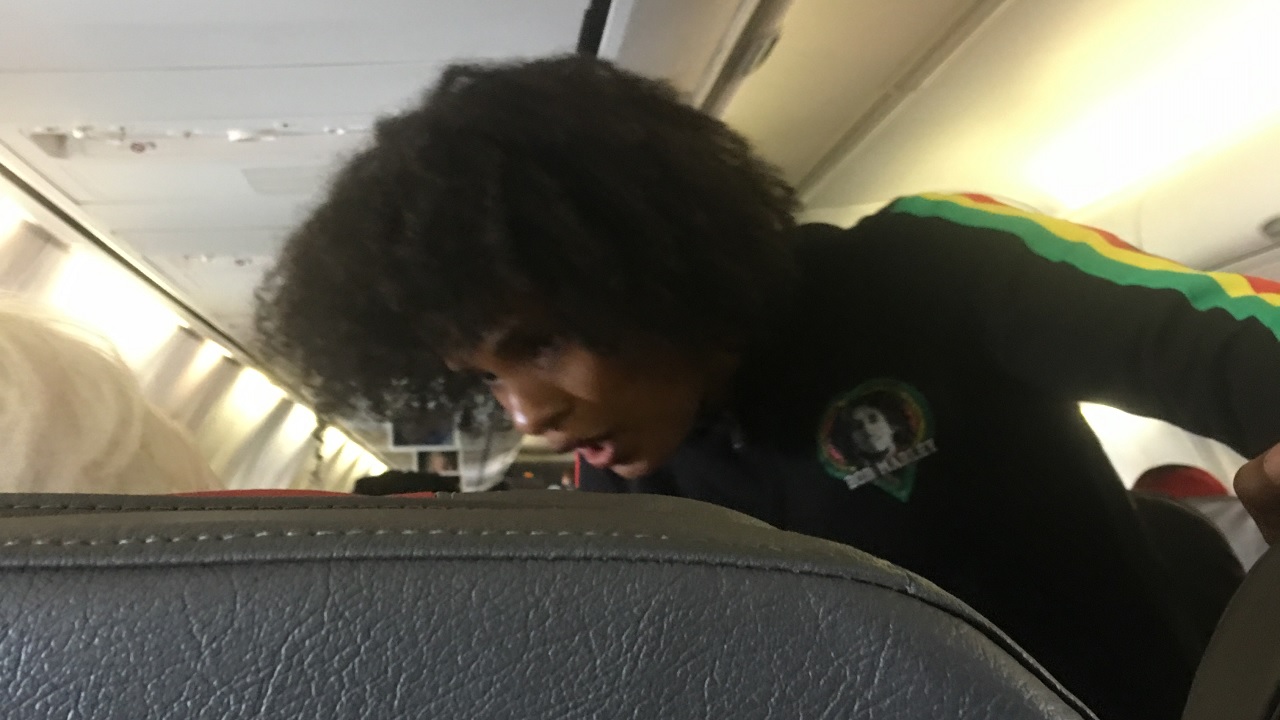 As the American Airlines flight hurtled Thursday morning past Cuba on its way to Miami, there was a frantic plea from an elderly woman: "is there a doctor on board?'. Her male companion, a white haired septuagenarian had fainted in her arms, and she feared the worst.

"Is there a doctor on board?" she asked again. Louder this time. The flight attendants registered the note of worry in her voice and scuttled over quickly. A thirtysomething year old lady was the first to come over. She admitted that she wasn't a doctor but was proficient in first aid and CPR. She asked for a plastic bag and immediately a scandal bag was handed to her.

The passengers were now very concerned. The man was clearly in distress, and then, a quiet unassuming young woman with mocha skin and sharp delicate features appeared. She was wearing a Bob Marley jump suit with red, green and gold stripes emblazoned on the arms, and with a shock of kinky black hair on her head like a halo,  she appeared like an angel sent from on high.

She immediately took charge of the situation, asking for a blood pressure cuff to ascertain the man's blood pressure, and ordered the attendants to get an oxygen tank to assist with the man's breathing.

"We are close to Cuba but we cannot land and we are at least an hour from Miami," a female flight attendant said.

Passengers' heads began to swizzle. No one wanted to be a part of a bonafide medical emergency at 20,000 feet. But the good doctor, Dr Tanesha Davis, was unperturbed. She checked him thoroughly, with the assistance of his wife, and was able to stabilise his blood pressure after realizing that it was low. Then she administered aspirin.

She sat with the couple the remainder of the flight, chatting with them about fainting spells, the importance of being hydrated given the searing temperature this Summer, and the danger of salt-free diet, putting them at ease with her warm smile and great 'bedside manner'. For the duration of the flight, a female flight attendant would check with Dr Davis ever so often to give the kind doctor an update on her own two year old who she had 'abandoned' to answer the call of duty.

"I was just doing what the situation demanded...I am a doctor specialising in internal medicine," she humbly told Loop Jamaica reporter Claude Mills after the situation had been calmed and fears assuaged.

Internal medicine or general medicine is the medical specialty dealing with the prevention, diagnosis, and treatment of adult diseases.

The passengers on the flight AA2370 and the elderly couple in seats 27 A and 27 B were grateful that she just happened to be on the flight that fateful morning.