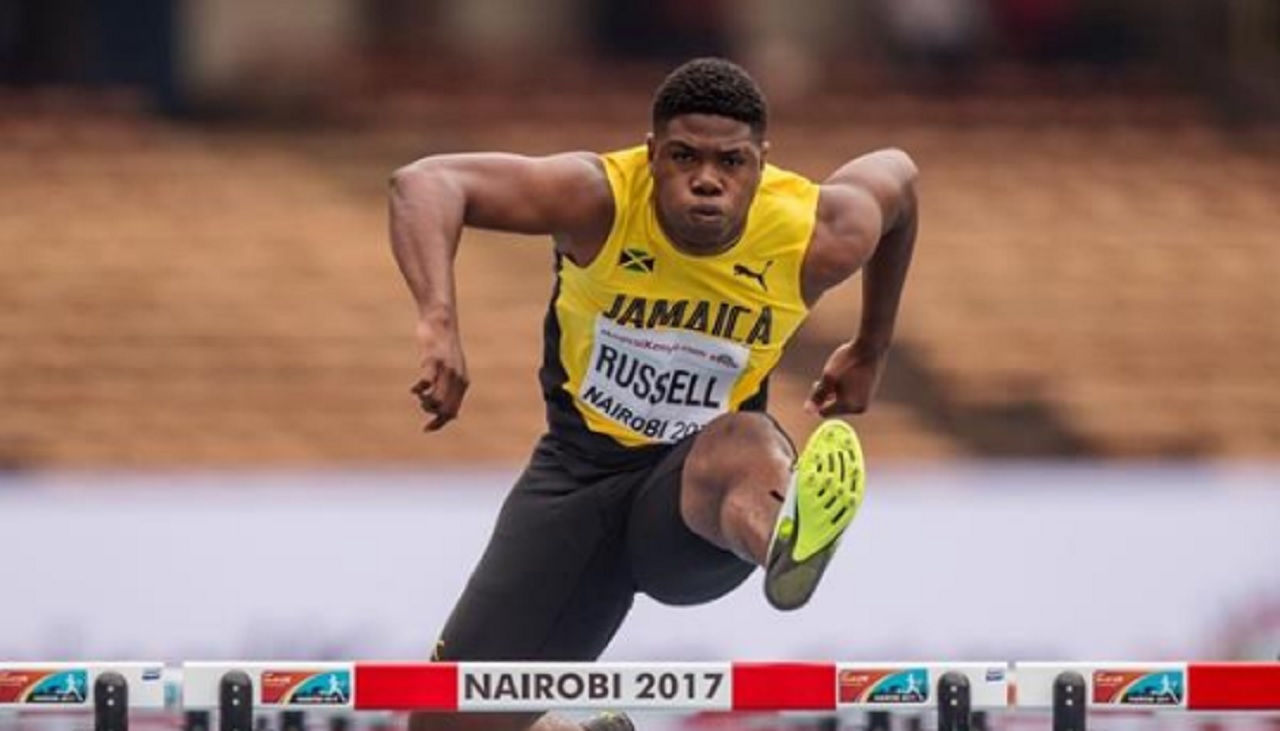 Jamaican De'Jour Russell issued a strong statement in the heats of the boys' 110-metre hurdles with a championship record run in the morning session on Thursday's second day of the 10th and final IAAF World Under-18 Championships in Nairobi, Kenya.

Running in the first heat at the at the Kasarani Stadium, the 17-year-old Jamaican took his personal best from 13.31 (already a world-U18-leading time this year) all the way to 13.08. The time made him the second fastest U18 athlete of all time, behind his compatriot Jaheel Hyde's world U18 best of 12.96.

Russell's time was amazing given his slow reaction time of 0.221 and the fact he slowed down before the finish. With the semifinal and final scheduled for Friday, there may be much more to come from the Jamaican who recently clocked a world age-17 best of 13.32 over the senior height barriers.

None of the other hurdlers came near Russell's performance, but there were other notable runs, including the remaining heat winners: Enrique Llopis of Spain with 13.47 (a personal best by 0.25), Lu Hao-hua of Chinese Taipei with 13.57 and Saoud Al-Humaidi of Qatar with 13.72.

The early exit of Zayed Al Shamsi of the United Arab Emirates was also notable. The third fastest U18 athlete this year with 13.43 finished only sixth in his heat in 14.70 and was eliminated.

The other Jamaican sprint hurdler -  Brithton Senior - who advanced as one of the four fastest losers has the 11th fastest qualifying time.

Senior clocked 13.83 seconds for fourth place in Heat 2, and had to wait in order to secure his spot in the semi-finals.

Russell, the big favourite for the gold medal, is attempting to erase his bad memories from the IAAF World U20 Championships Bydgoszcz 2016.

At Bydgoszcz 2016, Russell recorded a world age-16 best and world-U20-leading time of 13.20 in the semifinals  to earn the favourite’s tag ahead of the final, but finished fourth in the medal round, just missing out on a medal in his first global championships.

Meanwhile, Sanique Walker of Jamaica, the fastest U18 in the world this year, was the best in the girls' 400m hurdles heats, qualifying for Saturday's final with 58.74. The Lithuanian Gabija Galvydyte, running in the same heat as Walker, was the second fastest of the day with 58.94, a personal best by a whopping 1.7 seconds.

And Cemore Donald of Jamaica is out of the girls' 800m after failing to finish in Heat 2.

The fastest of the qualifiers for the semi-finals was the Kenyan Jackline Wambui, winner of heat three in 2:08.24, 1.5 seconds ahead of Hirut Meshesha of Ethiopia. The event favourite, Kenya's Lydia Jeruto, took heat one in a relatively pedestrian 2:10.37, but looked strong, running the final 200 metres in about 31 seconds.

Jamaica has already secured a medal at the championships.

Tyreke Wilson, who was the gold medal favourite for the boys' 100m, ended up with the bronze behind the South African pair of Tshenolo Lemao and Retshidisitswe Mlenga on Wednesday's opening day.

The Jamaican crossed the line in 10.65 seconds after he had earlier clocked 10.47 seconds to beat the eventual gold medal winner Lemao (10.50)  in the semi-finals.

Six Jamaicans will be in action during that session include Wayne Pinnock in the boys' long jump final at 4:35 pm (8:35 am Jamaica time) and world leader and gold medal favourite 15-year-old Kevona Davis in the semi-finals of the girls' 100m.