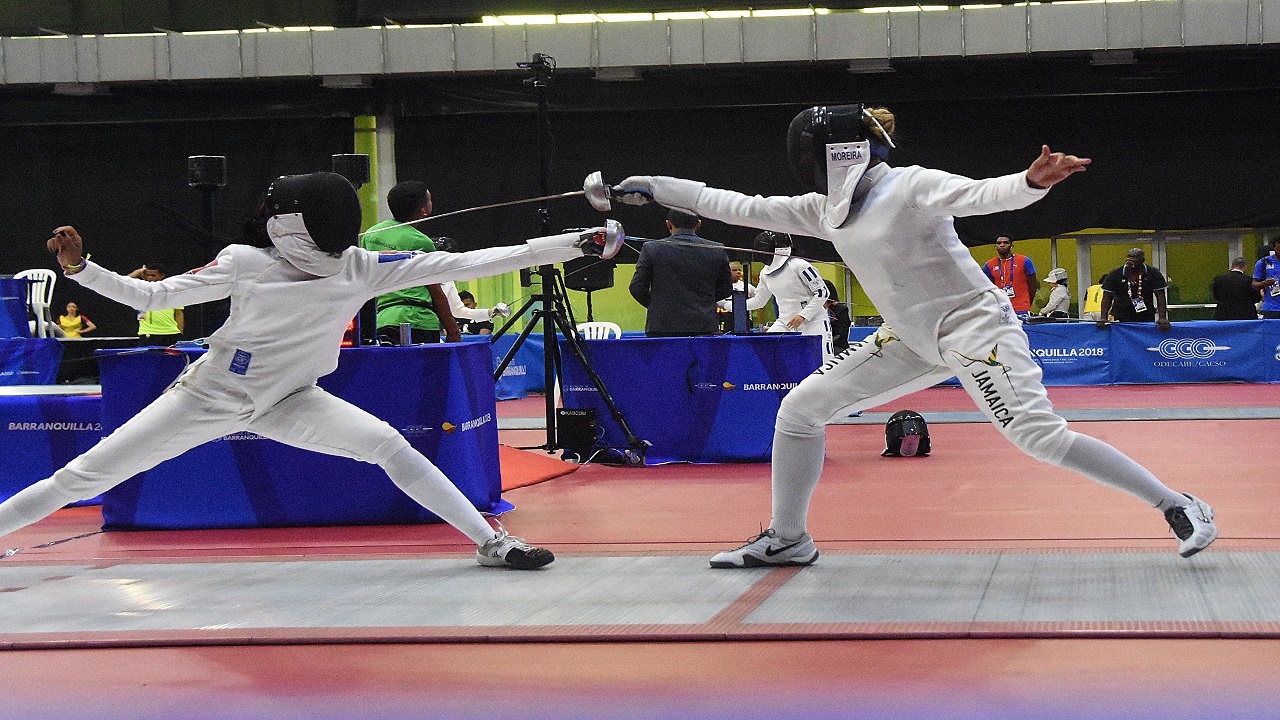 Caitlin Chang won Jamaica its first ever medal in fencing at the Central American and Caribbean (CAC) Games, a silver, in the final of the individual epee competition on Saturday in Barranquilla, Colombia.

Chang, who began competing in the morning session, took silver after going down 10-15 to Cuba’s Jocelyn Cruz in the final.

“I did better than I expected today and it’s great to win a medal for Jamaica,” said Chang. “I am sad I lost the finals, but I’m just putting it in the back of my mind and I’m just super happy now that I managed to get this for myself and my team-mates. They really spurred me on the whole day, they really, really crazily cheered me on.

“It’s just an amazing feeling to have gotten a medal at these Games.”

Commenting on the historical aspect, she said: “We’re fairly new in terms of federations, so winning this medal for fencing is special. It’s very emotional because it’s historic in a way, it’s our first senior medal at this Games. I think one of our team-mates won something similar in qualifying. But this is a historic moment and I’m a part of that.”

Head of the Delegation for the Jamaica team, Lieutenant General Derrick Robinson, and Ryan Foster, CEO of the Jamaica Olympic Association (JOA), commended her efforts.

Robinson said: “It’s an excellent performance. I believe it’s the first fencing medal that we’ve got at the Central American and Caribbean Games. It’s good for the sport and tomorrow I know there are other competitions that we’ll be entering in and we look for more successes.”

Foster remarked: “Another first for the JOA. This medal symbolises the broadened movement in support by the JOA in allowing other sport the platform to showcase the strength of our country’s ability to perform outside of track and field.”

He added: “I’m extremely pleased to see the variety in medals thus far as we have now won medals in squash, swimming and now fencing. Our 10 in 20 campaign is well on the way."

She had begun her march to the final with a 15-9 victory over Caira Moreira-Brown in an all-Jamaica match-up, one which left her deflated, then inspired.

“It was really sad I had to fence my team-mate in the first round, in the last 16, Ciara. It was heart-breaking, I cried afterwards, I felt so awful to have to put my team-mate out of the competition. It was really sad. It was a hard thing to come through,” Chang shared.

“But I had to keep myself focused and get myself back into the competition and just focus on what I needed to do. Once I fenced Ciara I said I had to do this for Ciara … I need to win this medal for Ciara, it was an inspiration for me to really get further,” she added.

That Chang did in her very next match, eliminating Costa Rica’s Andrea Campos 15-9.

That qualified her for the evening semi-finals, which turned out to be a very competitive affair against the Dominican Republic’s Maria Martinez. The Jamaican duly obliged, winning 11-10 to set up the gold medal game against Cruz, who proved superior.

In men’s fencing, individual sabre, Jamaica’s Donovan Deans made a winning start in morning play, easily dispatching the US Virgin Islands’ Theodor Weller 15-8 in his first encounter.
However, Deans found the going much tougher in his second round clash against Venezuela’s Jose Quintero and lost 15-9.

Meanwhile, Jamaica’s much vaunted track and field outfield will begin competition on Sunday, where the marquee 100-metre men’s and women’s events sharing the spotlight with Traves Smikle and Basil Bingham, who will chase medals in the men’s discus final.

Jonielle Smith and Natasha Morrison will lead the women’s 100m medal chase, with Nesta Carter and Kimmari Roach headlining the men’s charge. Among those running the longer sprint is 200m specialist Rasheed Dwyer.