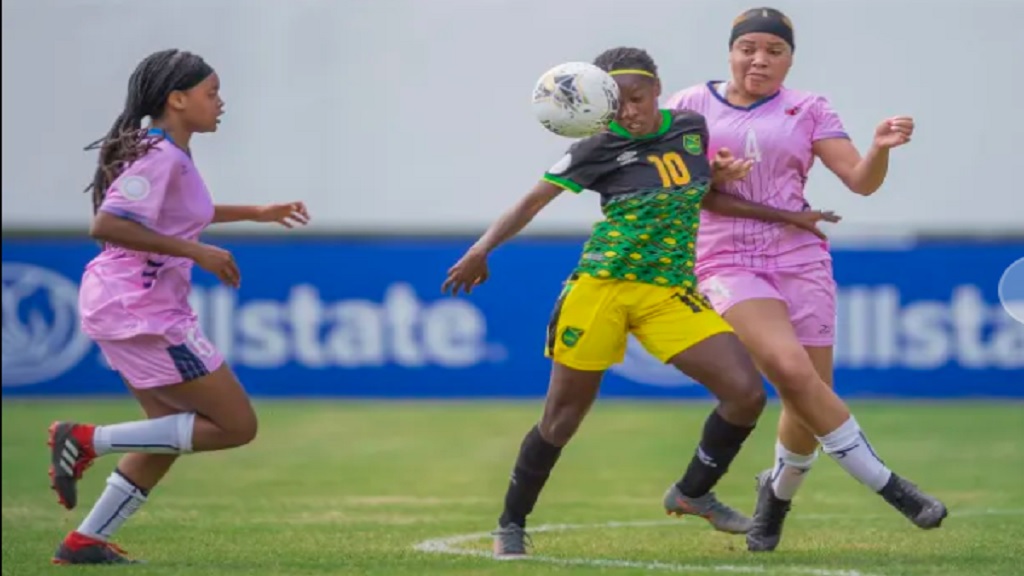 Jamaica's captain Jody Brown (centre) in control against two Bermuda's defenders during their Round of 16 fixture of the 2020 Concacaf Under-20 Women’s Championship at the Estadio Panamericano in San Cristobal on Saturday, February 29, 2020. Brown scored four goals to lead Jamaica to a 9-1 victory. (PHOTO: Concacaf).

Jamaica, United States, Canada and the Dominican Republic all punched their tickets to the quarterfinals of the 2020 Concacaf Under-20 Women’s Championship with commanding victories in the Round of 16 on Saturday.

The day started with Jamaica’s impressive 9-1 win over Bermuda at the Estadio Panamericano in San Cristobal.

That was followed by Canada rolling past Cuba 6-0, also at the Estadio Panamericano in San Cristobal.

Both Tanya Boychuk (7th, and 56th minutes) and Jazmine Wilkinson (82nd and 83rd minutes) had braces, while Leonie Portelance (90th) had a goal and Cuba’s Alianne Matamoro (36th) had an own goal.

The day’s other action took place the Estadio Olimpico Felix Sanchez in Santo Domingo, starting with a 6-0 victory for the United States against Saint Lucia.

Mia Fishel (8th, 76th minutes) and Brianna Pinto (36th, 90th minutes) each had braces, while Sierre Enge (24th) and an own goal from Saint Lucia’s Renala Francis (14th) completed the scoring for the U.S.

The two sides were level at halftime 1-1 on goals from the Dominican Republic’s Jazlyn Oviedo (37th) and Yoselyn Lopez (21st). But in the second half the home side would power through, thanks to another strike from Oviedo (64th) and a brace from Mia Asenjo (52nd, 78th minutes).

Jamaican, which went unbeaten on their way to topping Group E in the preliminary round, will now play the Dominican Republic in the quarterfinal on Wednesday.

Canada earned a date with the powerful United States in the quarterfinal, also Wednesday.

There will be plenty on the line given only the semifinal winners advance to the FIFA U-20 World Cup in August.

The two tournament finalists will join co-hosts Costa Rica and Panama as Cconcacaf representatives at the FIFA U-20 championship.