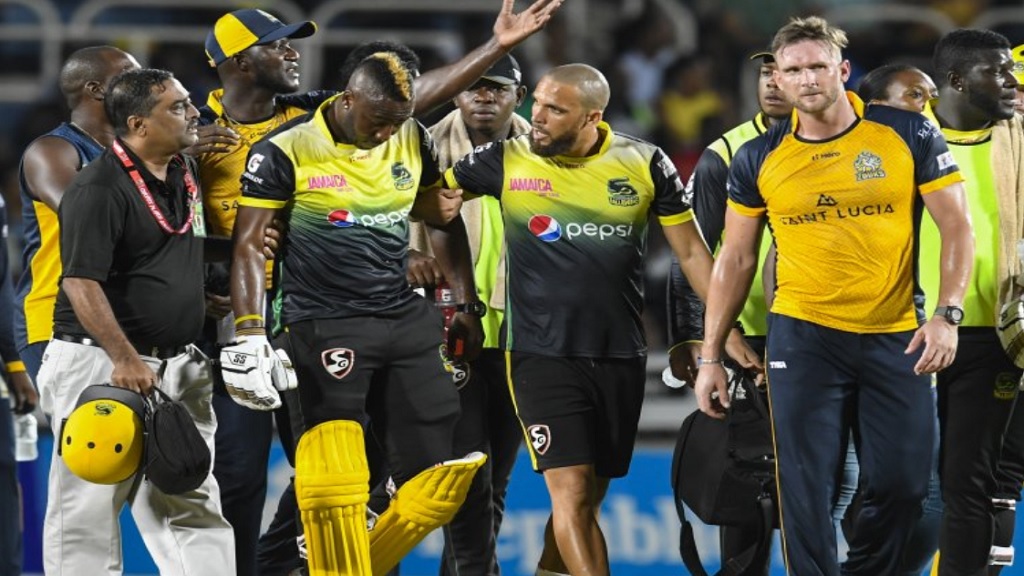 Jamaica Tallawahs’ star all-rounder Andre Russell is being taken off the field after he was hit on the back of the head by a Hardus Viljoen bouncer. (PHOTOS: CPL).

Set 170 for victory, St Lucia Zouks reached the target with 20 balls to spare and five wickets in hand.

The night was marred by a nasty-looking injury for Jamaica Tallawahs’ star all-rounder Andre Russell.

Rahkeem Cornwall continued his fine start to the season with a top score of 74 as he and Andre Fletcher (47 not out) did the bulk of the work to send the Zouks home.

But the sight of Russell being taken from the field having been struck on the back of the head by a Hardus Viljoen bouncer was one nobody wanted to see. Russell was taken to hospital and given the all-clear after a scan. On the doctors’ advice, he returned to the team hotel to rest.

Back on the field, the Zouks’ run-chase was a formality after the flying start provided by their opening pair, who put on 111 in just 52 balls, despite a late wobble as Oshane Thomas took three wickets in his final nine balls.

Cornwall raced to his 50 in just 19 balls, six of which he sent over the ropes. Three sixes came in the third over of the innings, bowled by Jerome Taylor. First, Fletcher picked him up over the legside before Cornwall went down the ground for the full count off successive deliveries.

Another pair of successive sixes off George Worker’s part-time spin took Cornwall within one run of the half-century, which he duly reached next ball with a single.

The end of the fielding restrictions did nothing to change Cornwall and Fletcher’s intent. The big man blasted a four and two more sixes from the first four balls of the seventh over, and when Fletcher hit the first ball of the eighth over to the cover boundary the hundred was up and the required rate down below a run a ball.

Cornwall’s fun was eventually ended by an inside edge into his stumps off Shamar Springer. He faced just 30 balls for his remarkable 75, eight of them dispatched into the stands.

John Campbell followed soon after, plumb lbw to Ramaal Lewis, but the Zouks were so far ahead of the rate that they could afford to take stock. Colin de Grandhomme joined Fletcher and, after giving himself a few sighters, plundered two fours and a huge slog-swept six over deep midwicket from Lewis’ second over.

The Zouks were far enough ahead of the game that a superb two-over spell from Thomas, picking up the wickets of de Grandhomme, Sammy and Roland Cato while conceding just four runs, came too late to affect the final result.

Thisara Perera smashed a six and a four off Jerome Taylor in the 17th over with Fletcher remaining unbeaten on 47 to get the job done with plenty of time to spare. 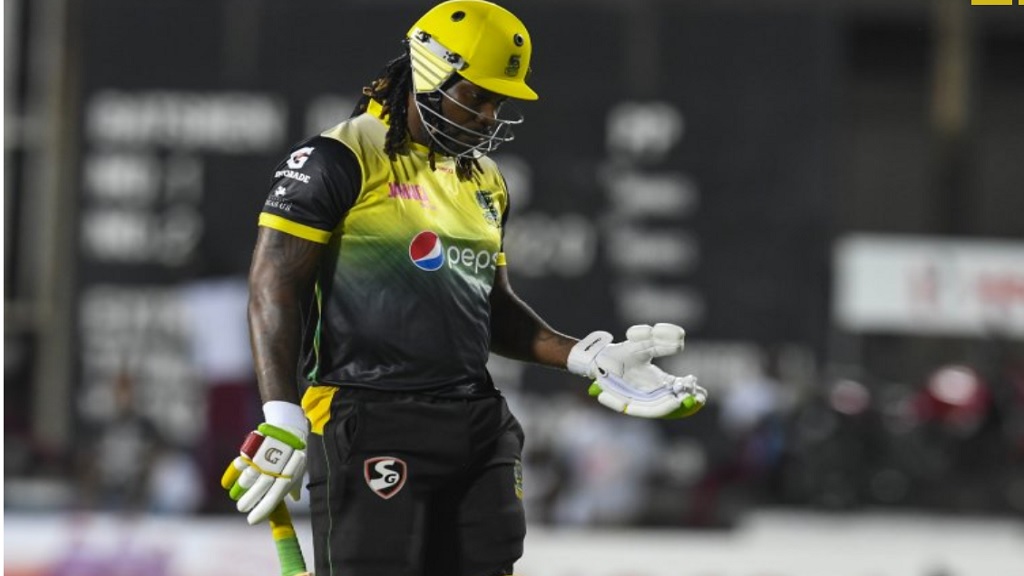 Earlier, the Tallawahs were restricted to 170 for five off their 20 overs in the first Sabina Park fixture of the season with Glenn Phillips top-scoring with 58 from 38 balls.

The Tallawahs' innings got off to the most dramatic of starts. A scruffy beginning to the over from Obed McCoy was soon forgotten when extra bounce had Gayle nicking behind for a golden duck.

And things got better still for McCoy in his second over when Chadwick Walton – on the back of a Hero CPL record stand with Gayle in the Tallawahs’ last game – also fell cheaply. He made just eight before picking out Campbell at deep square-leg.

That brought Phillips and Powell together, though, and they set about the Zouks bowling. Nobody was spared. Powell struck the first Hero Maximum of the night, straight and true into the sightscreen off Fawad Ahmed, while Phillips was finding the boundary with regularity.

Sixteen runs came from the final over of the Power Play, with Phillips smacking Kesrick Williams way back over midwicket for his first Hero Maximum.

Phillips reached his half-century from just 26 balls and at the halfway stage the Tallawahs had raced to 108 for two with the Phillips-Powell partnership worth 81 from just 42 balls.

It was going to take something special to break the partnership, and de Grandhomme produced it. Powell was millimetres away from reaching his half-century but instead had to depart for 44 as de Grandhomme caught the ball just inside the rope and flicked it in the air before going over the boundary and then stepping back inside to complete the catch and give Fawad Ahmed his first wicket of the night.

He removed Phillips as well in his next over – a far simpler catch for de Grandhomme this time – before Russell’s injury cast something of a pall over the night’s action.

Perhaps understandably, the Tallawahs’ innings never really got going again after Russell left the field on a stretcher, with just 38 coming from the final six overs.