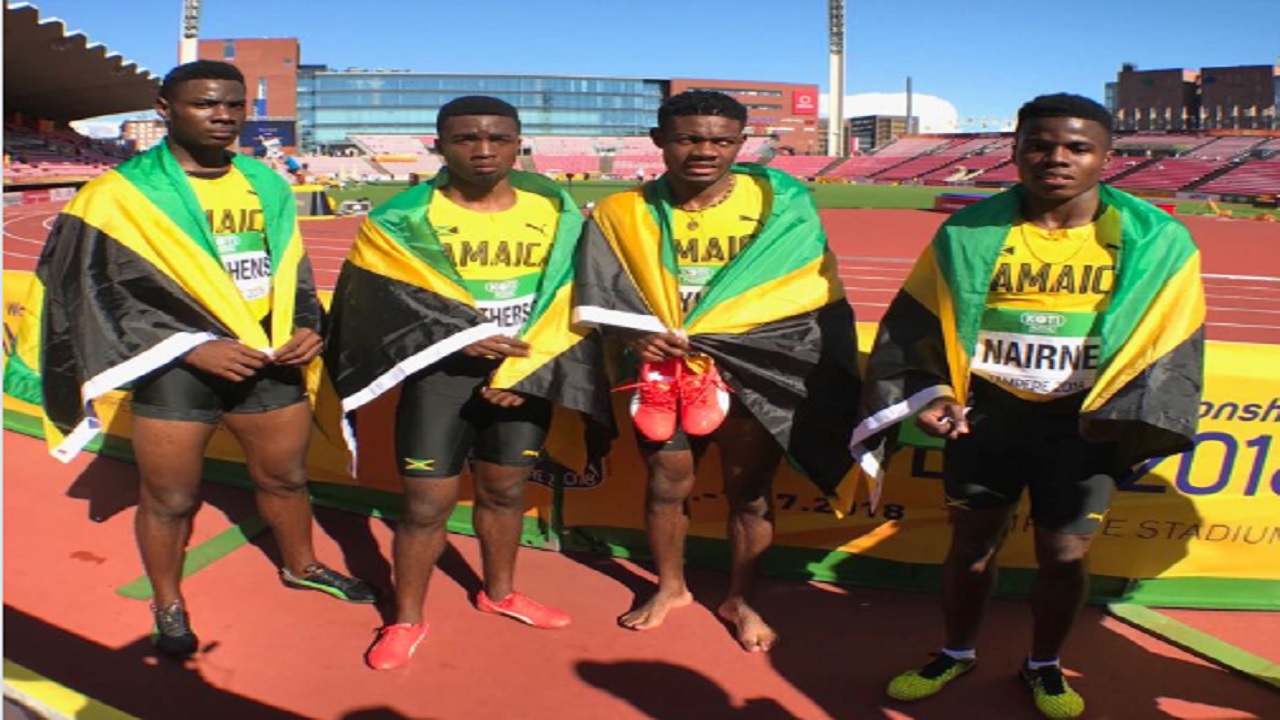 Members of the Jamaican men's 4x100m relay team that finished second for silver at the IAAF World Under-20 Championships in Tampere, Finland on Saturday's fourth and penultimate day. (From left) are Michael Stephens, Jhevaughn Matherson, Christopher Taylor and Xavier Naire.

Jamaican closed the fourth and penultimate day of the IAAF World Under-20 Championships in Tampere, Finland by taking silver in the men's 4x100-metre relays on Saturday.

The quartet of Xavier Naire, Christopher Taylor, the silver medallist in the 400m, Jhevaughn Matherson and Michael Stephen combined to lower the national U20 record to 38.96 for their second-place finish.

The United State, led off by  double bronze medallist Eric Harrison, set a world U20 leading mark of 38.88 to take the event, but it took until the final race on the penultimate day for the country to win its first gold medal. The victory represents the sixth successive time that USA was winning the sprint relay.

Four teams were still in title contention at the final changeover but Micah Williams maintained the United States’ slender lead, holding off Stephens in the process.

United States have now won the 4x100m relay title at each edition of the World U20 Championships since Bydgoszcz a decade ago but Japan’s run of medals narrowly came to an end. The silver medallists from two years ago --and ever-presents on the podium since Barcelona in 2012-- just missed out on the bronze medal with Luis Bradner from Germany getting it on the dip, 39.22 to 39.23, also replicating their bronze medal-winning performance from 2016.

Italy came to grief on the first handover between Francesco Libera and Lorenzo Paissan and were the only country who didn't finish.

It was the second medal on the day for Jamaica as earlier Briana Williams stormed to victory in the 200m to collect her second sprint gold in less than 48 hours to sensationally cap her rise on the international stage.

Two days ago Williams became the youngest to win the 100m crown which today makes her the youngest to claim the 100/200m title. That's notable enough in and of itself, but such an achievement is rare, too. Williams is just the fourth to claim the dash double in the championships' 17 editions, following Jamaican Veronica Campbell-Brown (2000), Bulgaria's Tezdzhan Naimova (2006) and Bahamian Anthonique Strachan (2012).

USA and Jamaica had failed to reach the final of the women’s event, but the race wasn’t lacking in excitement. One year after breaking the world U20 record, Germany won their first world U20 title in the women’s 4x100m since 2000, clocking 43.82.

Ireland won their third ever World U20 Championships medal by taking silver in a national U20 record of 43.90 while Britain got the bronze with 44.05.

With the two medals on the day, Jamaica improved their medal tally to nine, comprising three gold, four silver and two bronze for second place on the leaderboard in terms of medal won.

The USA remained atop the leaderboard in terms of medal won with 14, which comprises one gold, seven silver and six bronze.

Earlier, Leonardo Ledgister dipped under 50 seconds, clocking a new personal best 49.93 for fourth in the men's 400-metre hurdles final, just ahead of his Jamaican teammate Malik James-King who timed 50.25 for fifth place.

Pushed to the line and tested to the limit in a fiercely competitive race, Sokwakhana Zazini lived up to the massive expectations to strike gold  and take South Africa's second-ever men's gold in the event, and to join Zenéy van der Walt for the country's sweep of the discipline at these championships.

The 17-year-old, who took the U18 title in Nairobi last year, crossed the line in 49.42, just ahead of Qatari Bassem Hemeida, also17, who clocked a personal best 49.59 for silver, slicing nearly a full second from his previous best of 50.55.  Brazilian Alison Dos Santos finished third for bronze in 49.78, also a personal best.

And outstanding Jamaican sprint hurdler Britany Anderson has qualified for the women's 100-metre hurdles final after winning her semi-final heat in a new personal best 13.10, the second fastest qualifying time going into Sunday's final behind American Tia Jones with 13.06.

Amoi Brown, the other Jamaican sprint hurdler, crashed out following s 13.52 clocking for third place in the first semi-finals.

In the men's discus qualifying round, Jamaican Kai Chang took Group A  of the qualifiers with a throw of 59.27 metres, the fourth best effort going into the final on Sunday's final day of action in Tampere.

Jamaican Lotavia Brown failed to make it out of the qualifying round of the women's triple jump after finishing ninth in Group B with an effort of 12.72 metres.