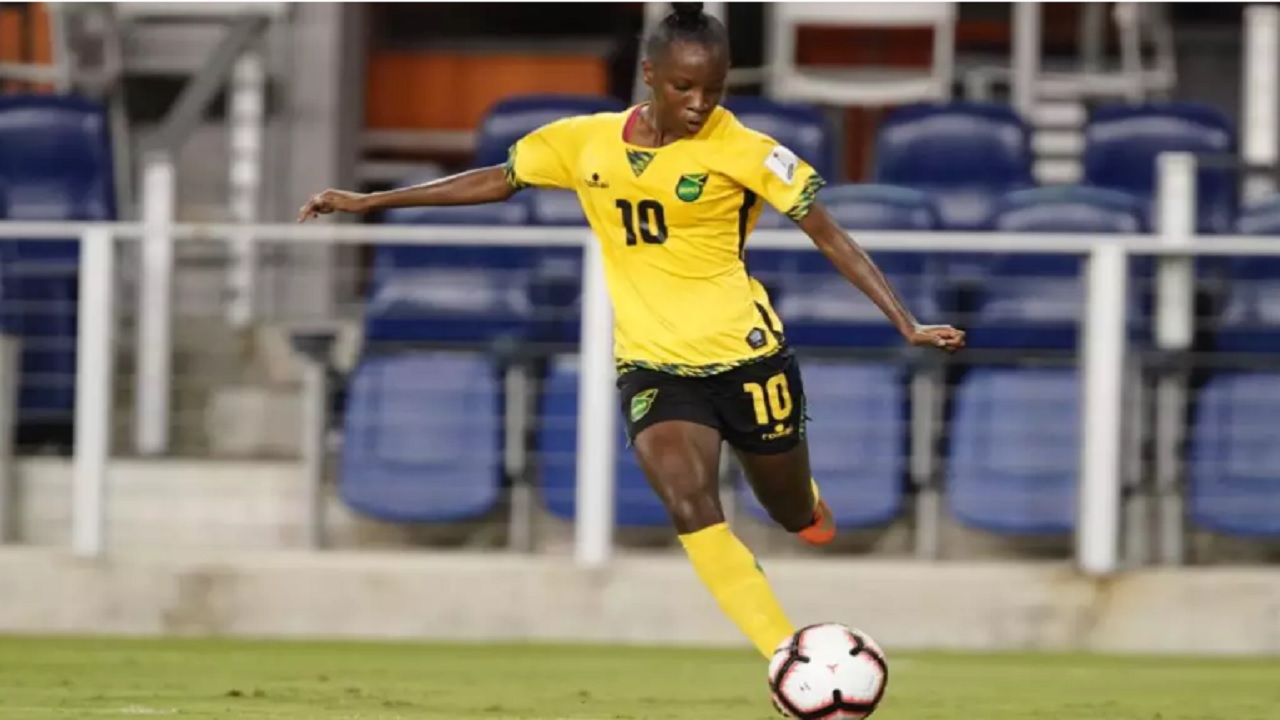 Jody Brown recorded a hat-trick to lead Jamaica's Reggae Girlz to a 9-0 victory over Cuba at the 2018 concacaf Women's Championship at H-E-B Park in Texas on Thursday night. (PHOTO: concacaf.com).

Jamaica's Reggae Girlz qualified for the semifinals of the 2018 concacaf Women's Championship by recording a 9-0 victory over Cuba in the final Group B match for both teams at H-E-B Park in Texas on Thursday night.

The Reggae Girlz spot was confirmed after Canada  registered a 3-1 win over Costa Rica in the second game of the doubleheader to capture Group B.

The Canadians finished the group stage perfect at 3W-0D-0L and nine points as their win allowed Jamaica (2W-0D-1L, 6) to compete in the final four of the competition in Frisco, Texas on Sunday.

The Costa Ricans (1W-0D-2L, 3), which competed in the 2015 FIFA Women's World Cup, were eliminated from the competition.

Khadija Shaw lifted the Jamaicans into a 1-0 lead in the second minute as she powered a 24-yard free kick over a five-player wall and past goalkeeper Katherine Montesino.

Brown doubled the lead in the 26th minute against Cuban (0W-0D-3L, 0), scoring from the right edge of the goal box before Sashana Campbell, after Shaw won the ball, found herself alone in front to make it 3-0 on the half hour. Brown tallied her second in the 38th minute as a pass went through both Cuban centre backs before she beat Montesino from 12 yards to the lower left corner for a 4-0 halftime advantage.

After Sucel Maceo fouled Shaw in the penalty area, Deneisha Blackwood converted a penalty kick into the lower left corner for a five-goal margin in the 50th minute.

The Concacaf Women´s Championship 2018 will determine the three Concacaf teams to the Confederation that automatically qualify for next summer’s 2019 FIFA Women’s World Cup in France, while the fourth-place team will play a playoff against Argentina, third place finisher from Conmebol in a World Cup playoff.

After round-robin play in Cary, NC and Edinburg, TX, the two group winners, plus the two second-place finishers will advance to the knockout round. The semifinals, third place match and final will take place at the Toyota Stadium, in Frisco, TX.

In the last edition of the concacaf Women’s Championship, the United States overcame Costa Rica 6-0 in the final to win its seventh title.

Reggae Girlz in must-win clash against Cuba in Women's Championship