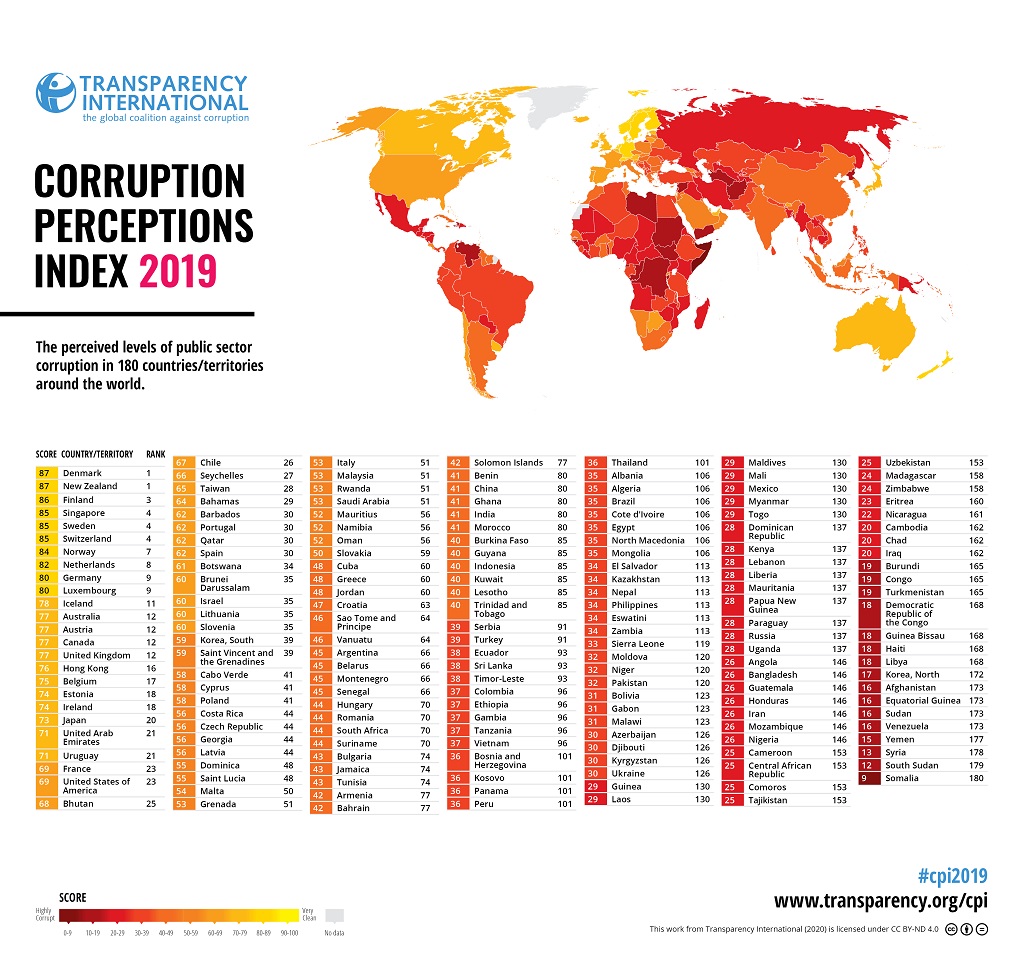 Jamaica has slipped four places to 74 in the 2019 edition of the Corruption Perception Index (CPI) that was released on Thursday by Transparency International.

This indicates that Jamaica is perceived to have become more corrupt over the past year, as is evident in the CPI score of 43 out of 100, received by the Northern Caribbean territory. Jamaica received a CPI score of 44 out of 100 in 2018 when the country was ranked as the 70th least corrupt in the world.

Executive Director of corruption watchdog, National Integrity Action (NIA) Professor Trevor Munroe, has offered several reasons why Jamaica may have slipped on the CPI in 2019. Chief among them are the scandals that continue to hobble the Andrew Holness administration and the controversy and protracted delay that surrounded the prime minister’s filing of his annual statutory declarations.

- Topping the list is the March firing of Ruel Reid as Education Minister by the prime minister as news emerged of irregular practices at the Ministry of Education and some of its affiliated agencies.

- In April, the long delayed report from the Contractor General into the controversial sale of the Rooms on the Beach property in St Ann at heavily discounted rates followed. The report cited improper conduct on the part of persons connected to the Government.

- News emerged in May during a press conference hosted by the Integrity Commission that the statutory declarations of the prime minister were not cleared.

- By July 2019, the country was told in the first annual report of the Integrity Commission that two unnamed Members of Parliament were under investigation by the Financial Investigation Unit of the Commission.

- Also in July, 2019, the Integrity Commission, in the said annual report noted that the investigation into the Petrojam oil refinery was completed and the matter referred to its Director of Corruption Prosecution. However, since that time there has been no information regarding the consequences of this referral.

- August 2019 saw the retirement of the Director of Corruption Prosecution from the Integrity Commission following disagreements between the commissioners and the director over the Rooms on the Beach report.

- Also in August, controversy was stirred when it emerged that the statutory declarations of the prime minister and the leader of the Opposition only indicated purchase price and not the estimated market value of 'immovable property' held by the declarants, their spouses and children as indicated by the third schedule of the Integrity Commission Act.

- September 2019 saw the resignation of the chairman of the Integrity Commission and no explanation was offered.

The NIA is the local chapter of Transparency International in Jamaica and Munroe released the CPI findings on Thursday, simultaneously with the parent body’s release of the global findings.

The CPI ranks 180 countries and territories by their perceived levels of public sector corruption, according to experts and business people. The report notes that more than two-thirds of countries score below 50 on this year’s CPI, with an average score of just 43, the same score as Jamaica.

“Similar to previous years, the data shows that despite some progress, a majority of countries are still failing to tackle public sector corruption effectively,” the report said.

“Our analysis also shows corruption is more pervasive in countries where big money can flow freely into electoral campaigns and where governments listen only to the voices of wealthy or well-connected individuals,” the report added.

Said the report’s authors: “With an average score of 43 for the fourth consecutive year, the Americas region fails to make significant progress in the fight against corruption. While Canada is consistently a top performer, with a score of 77 out of 100, the country dropped four points since last year and seven points since 2012. At the bottom of the index, Venezuela scores 16, which is also one of the bottom five scores globally”.

It warned that “The region faces significant challenges from political leaders acting in their own self-interest at the expense of the citizens they serve. Specifically, political party financing and electoral integrity are big challenges”.

Meanwhile, The Bahamas has been ranked the least corrupt Caribbean country in 2019.