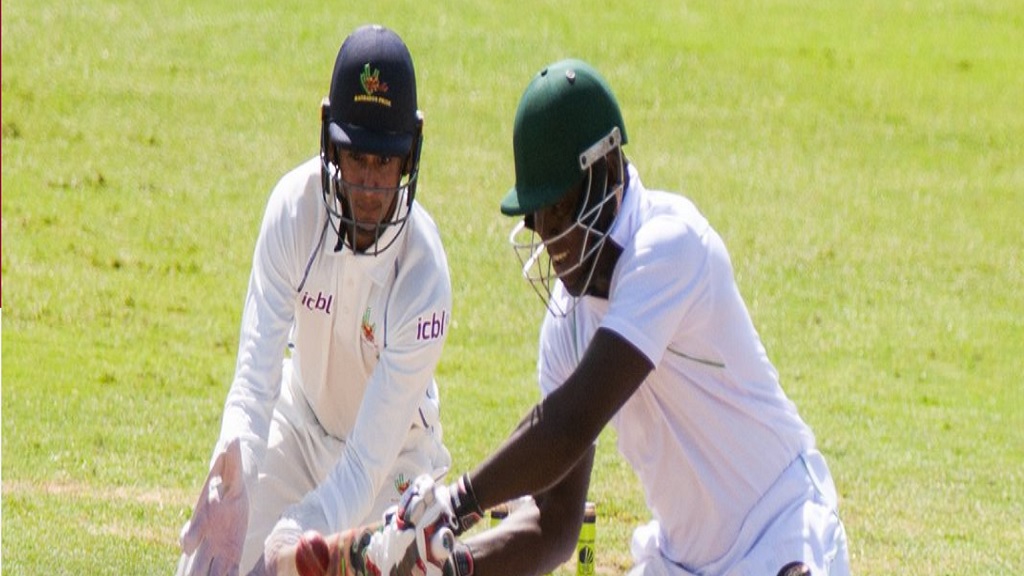 Jamaica Scorpions enjoyed a good opening day against leaders and four-time defending champions Guyana Jaguars in the seventh round of the West Indies Championship at the Guyana National Stadium on Thursday.

Half centuries from Derval Green and Brandon King helped Jamaica Scorpions keep the Jaguars in the field all day. as they closed on 320-8.

Green was unbeaten on 59 and has so far shared 90 – unbroken – for the ninth wicket with Dennis Bulli, not out on 30, that  stabilised the Scorpions’ batting and frustrated the Jaguars in the last 1 ½ hours of play.

King had anchored the top half of the Scorpions’ batting with a steady 51 before he became the first of scalp of 3-52 from 10 overs for West Indies international Sherfane Rutherford.

But Scorpions cruising at 132 for three, lost three wickets – two to Rutherford – for 40 in 80 balls including Test batsman Jermaine Blackwood for 44, Guyanese left-hander Assad Fudadin for 29.

A stand of 56 for the seventh wicket between Barbadian Kenroy Williams and Scorpions captain Paul Palmer revived the innings before they were dismissed in the space of nine balls to leave the visitors 230 for eight.

But Bulli came to the crease and together with Green, whose knock included five fours and two sixes from 61 balls, engaged in a rollicking stand that transformed the complexion of the game.

OVER AT WINDSOR PARK IN DOMINICA: There were half-centuries for opener Montcin Hodge and former West Indies Under-19 World Cup-winning star Keacy Karty, as Leeward Islands Hurricanes batted all day against Windward Islands Volcanoes to reach 229-5.

Hodge continued his impressive form this season with a resolute 61 and Carty supported with 54, as Hurricanes made a strong start to the match.

Hodge put on 66 for the first wicket with Windies Kieran Powell, the Hurricanes captain, before shared a further 66 for the second wicket with Carty.

Hodge and Devon Thomas however, fell for six runs in the space of 21 balls to leave Hurricanes 138 for three, but Carty and Jahmar Hamilton added 51 for the fourth wicket add some stability.

They were however, both dismissed after tea in the space of 12 deliveries to set Hurricanes back on 198 for five, but Rahkeem Cornwall, not out on 16, came to the crease and with Terance Warde, not out on 14, batted for just over an hour prior to the close to stem the fall of wickets.

Fast bowler Ray Jordan was the pick of the Volcanoes bowlers with 3-45 from 15 overs.

OVER AT KENSINGTON OVAL IN BARBADOS:  Hundreds from Lendl Simmons and Jason Mohammed highlighted the opening day of the seventh round of matches.

Simmons, making his first appearance in the Championship in just over four years, slammed a typically enterprising 138 and Mohammed shrugged off his feeble form to hit 121, as Trinidad and Tobago Red Force closed the day on 316-8 against arch-rivals Barbados Pride.

Simmons and Mohammed led the Red Force recovery, after they won the toss, chose to bat and slipped to 69 for three.

Simmons and Mohammed put on a 182 for the fourth wicket, as the visitors reached 223 for three at tea.

Simmons smashed 16 fours and five sixes off 152 deliveries in a shade over four hours for his 11th first-class hundred and his first in six years.

Mohammed continued his surge in form to reach his eight first-class hundred which included 20 fours from 206 balls in just over four hours.

After the partnership was broken in the fifth over after tea, when Simmons was caught at deep fine leg off medium-fast bowler Kevin Stoute, it triggered a slide that saw Red Force lose five wickets for 65 before stumps were drawn.

Jamaican fast-medium bowler Marquino Mindley has been the most successful of the Pride’s bowlers with 3-56 from 16 overs.