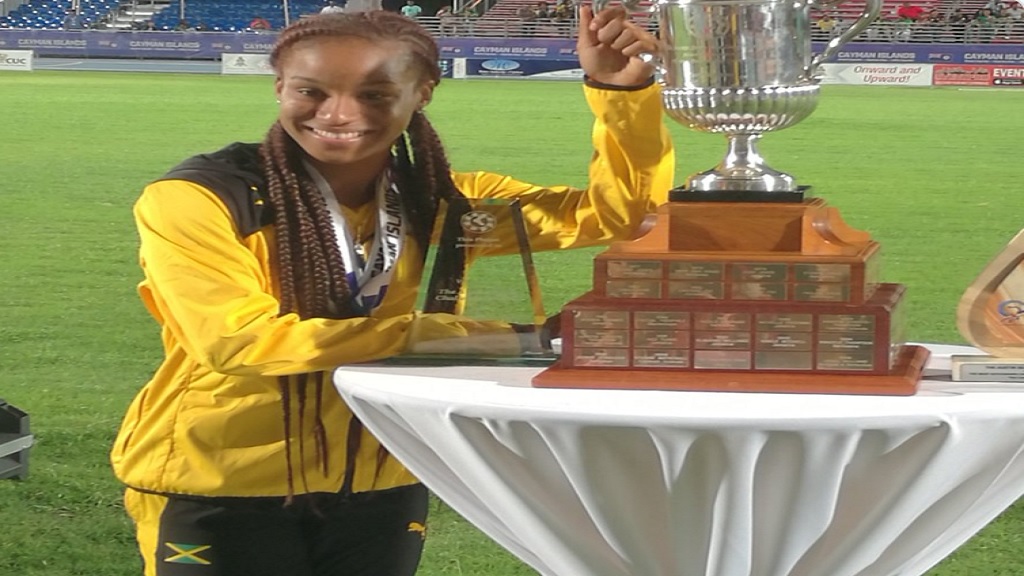 Briana Williams poses with the Austin Sealy award on the final day of the Carifta Games in the Cayman Islands on Monday, April 22, 2019. Williams won the prestigious award for the second straight year.

Jamaica’s junior athletes amassed 85 medals to win the Carifta Games for the 35th straight year at the Truman Bodden Sports Complex in the Cayman Islands on Monday night.

The victory means that in the 48-year history of the Games, the country has topped the medal table 43 times and its last defeat was in 1984 when The Bahamas won at home.

The 85-medal haul was one less than Jamaica's best ever medal haul of 86, which was achieved at the 2016 Games in Grenada and equalled in 2017 in Curacao.

Jamaica’s 85 medals were 59 more than closest rival The Bahamas, which finished second with nine gold, seven silver and 10 bronze for 26 medals.

The Florida-based Williams, competing in the Under-20 category for the first time, won the 100m, 200m and ran the opening leg on the victorious 4x100m relay team to be named the most outstanding athlete of the three-day championships with three gold medals.

The Jamaicans swept the sprint hurdles, sprint relays and the mile relays on the final day to finish the championship with a flourish.

In the sprint relays, the highlight came from the Girls’ Under-20 4x100m team that handed  Williams her third gold medal at consecutive Carifta Games.

Williams, the leadoff runner, gave the team a brilliant start and the other three athletes took advantage to carry the baton across the line in 44.25 seconds. 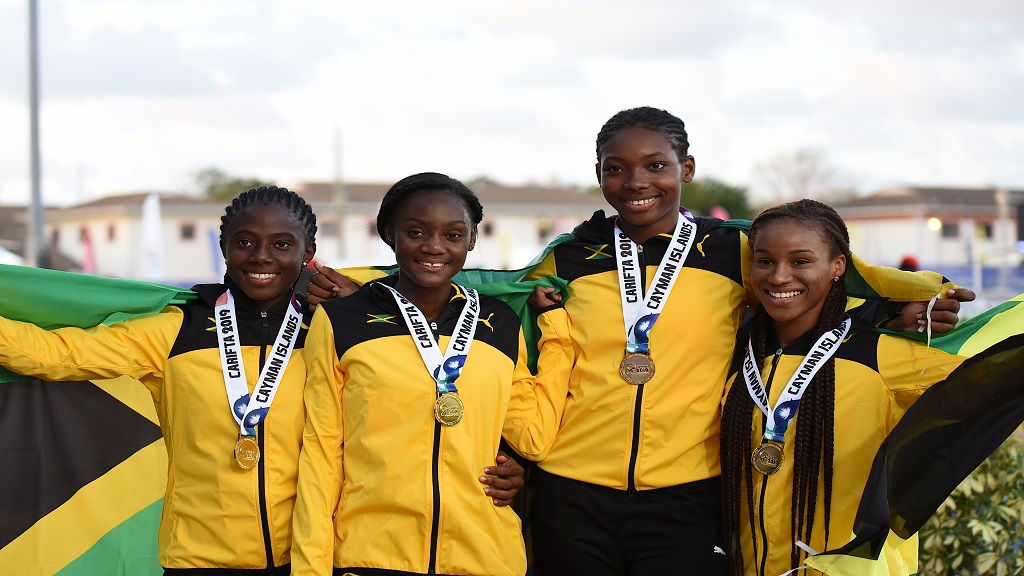 Joanna Reid, Ackera Nugent, and Kemba Nelson ran the other legs for Jamaica as Trinidad and Tobago were second in 45.11 seconds and Barbados third in 45.52.

The Boys’ Under-20 team did not have things as easy as the quartet of Oblique Seville,  Vashau Vascianna, Xavier Nairne, and Ryim Robertson just managed to stave off a strong challenge from the Bahamian team of Ure Mills, Rico Moultrie, Adrian Curry, and Joel Johnson.

Meanwhile, the Under-17 Girls’ team of Chrystal Shaw, Brianna Lyston, Glacian Loutin, and Kay-Lagay Clarke won their race in 45.63 with Trinidad and Tobago second in 45.73 and Bermuda third in 47.47.

Added to the clean sweep of the sprint hurdles, Jamaica secured quinella in three of the four races.

Kay-Lagay Clarke got things off to a flying start for Jamaica in the sprint hurdles by winning the Girls' Under-17 100m hurdles in 13.68 seconds. Crystal Shaw completed the Jamaican quinella in 13.72 seconds. Anthaya Charlton of The Bahamas finished third in 13.83.

Deshaun Lamb took the Boys' Under-17 110m hurdles in a championship record 13.54 and Niel-Matthew Sutherland completed the second Jamaican quinella in 13.61. Matthew Sophia of  Curacao finished third in 13.64 seconds.

Rasheed Broadbell (13.26) and Vascianna (13.32) rounded off the Jamaican quinella in the sprint hurdles, this in the Boys' Under-20 110m hurdles. Jeanice Laviolette of Guadeloupe finished third in 13.39.

Ackera Nugent lowered her own World Youth best time to 13.24 in the Girls' Under-20 100m hurdles to win the other sprint hurdles gold medal for Jamaica. Sarah Belle (13.55) of Barbados and Gabrielle Gibson (13.80) of The Bahamas finished second and third. 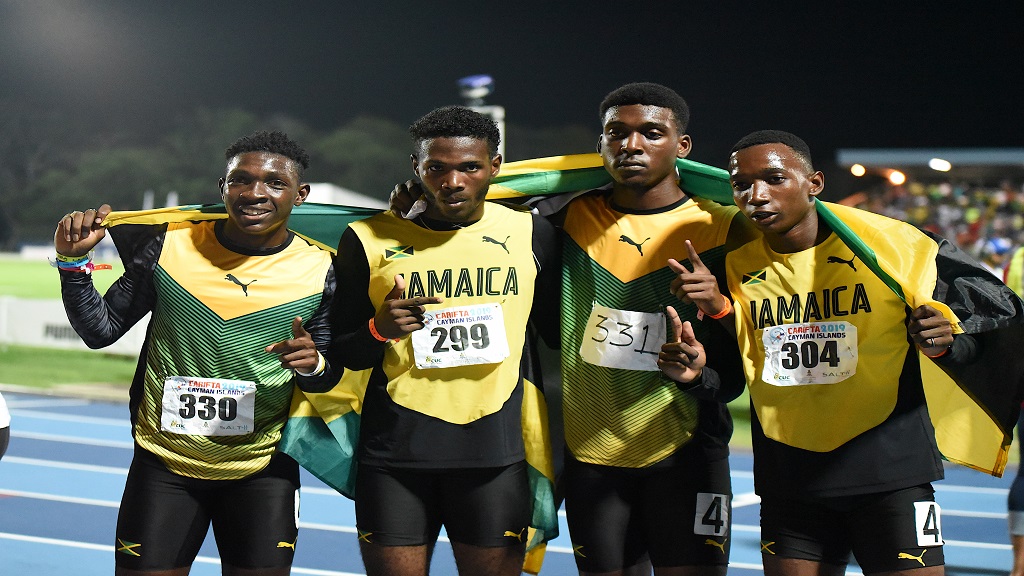 In the mile relays, the Girls' Under-17 team scored a very comfortable victory to set the stage for the Jamaican sweep. The quartet of Quaycian Davis, Rickiann Russell, Sashel Reid, and Dejenea Oakley completed the course in 3:41.00. The British Virgin Islands (3:44.89) and Trinidad and Tobago (3:44.91) finished second and third.

Foote, who won the  400m title in 52.63 seconds on Saturday and the 400m hurdles crown in 58.05 seconds on Sunday, ran the second leg of the mile relay. Johnelle Thomas, Annakay Allen, and Nickiesha Pryce ran the other legs.

The Boys' Under-20 4x400m relay team of Evaldo Whitehorne, Kimar Farquharson, Antonio Watson, and Anthony Cox found themselves in a duel with Barbados but eventually pulled away to win in 3:07.82.

The Boys' Under-17 triple jump final produced gold and silver for Jamaica with Rajuan Ricketts taking the victory with a best mark of 14.26m, well ahead of his teammate Jaheim Cox (14.01m), who was winning his second medal following a bronze in the long jump on Saturday.

Apalos Edwards had earlier took the bronze in the Boys' Under-20 triple jump final with 15.05m.  Jonathon Miller of Barbados won the gold medal with 15.30m with  Kelsey Daniel of Trinidad and Tobago taking silver with 15.14.

Cobe Graham won the Boys' Under-20 shot put title with an effort of 18.62m, while his Jamaican teammate Kai Chang, who won the discus throw gold medal, finished third for the bronze with an effort of 17.57m. Grenada’s Johann Jeremiah (18.53m) took the silver medal.

Jamaica won gold and silver in both the Boys and Girls' Under-17 discus throw finals.

Cedricka Williams won the Girls' Under-17 discus throw with an effort of 47.94m and Damali Williams finished second with 40.87m. Treneese Hamilton of Dominica was third with 39.29m.

Kobe Lawrence took the Boys' Under-17 discus throw with an effort of 53.32m and Christoper Young finished second with 51.34. Jayden Scott of Trinidad and Tobago was third with 47.50.

Jamaica secured gold and bronze in the Boys' 5000m with Kevroy Venson taking the victory in 15:21.30. Gabriel Curtis of The Bahamas, who tried to keep pace with Venson,  faded badly over the last 300m to claim the silver medal in 15:23.15.