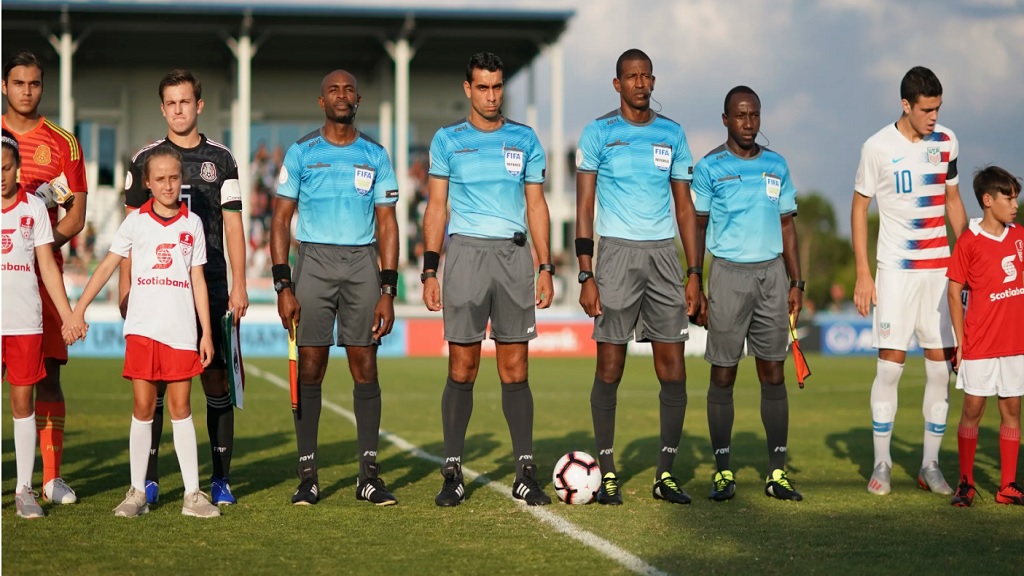 Jamaica´s Daneon Parchment (center) was the referee in the final match of the Concacaf Under 20 Championship between Mexico and Canada on May 16, 2019 at the IMG Academy in Bradenton, Florida, United States.

For coaches and players, participating in a Concacaf Gold Cup for the first time is always a special moment.

The same thing could also be said for referees, including Jamaica’s Daneon Parchment, who after 10 years of refereeing experience will get a chance to officiate for the first time ever in a Gold Cup this summer.

As part of his preparation process for his first Gold Cup, Parchment attended Concacaf’s Gold Cup referee seminar in Dallas, Texas and found the experience to be very helpful.

“It has been an awesome experience to be here in the classroom, getting acquainted with the new laws of the game and doing various video quizzes. In Concacaf we preach excellence, and I think with this preparation, we can all do an excellent job,” said Parchment.

On a personal level, being named as a Gold Cup referee was significant for Parchment.

Parchment was also quick to point out that without the support and backing given to him by Concacaf, refereeing in the 2019 Gold Cup might not have been possible.

“Concacaf has done so much for me. They have given me opportunities to officiate in tournament like the Concacaf Nations League and the [Scotiabank] Concacaf Champions League. That kind of exposure had helped me grow as a referee,” said Parchment.

There is no doubt that this is just the beginning for Parchment.

“My dream is to one day referee in a FIFA World Cup. I know I must continue to work hard but with the help of Concacaf, I know that achieving those dreams can be possible,” concluded Parchment.

The 2019 Concacaf Gold Cup is scheduled for June 15 to July 7. The bi-annual tournament will primarily be hosted in the United States, with Costa Rica and Jamaica also hosting doubleheaders in the first round of matches in groups B and C, respectively.

The United States are the defending champions, having won the 2017 tournament.

Jamaica's Reggae Boyz have been drawn in Group C  with Honduras, El Salvador and Curacao.

The group-stage doubleheader in Jamaica takes place on June 17 at the National Stadium, the day when the Reggae Boyz will open their campaign.