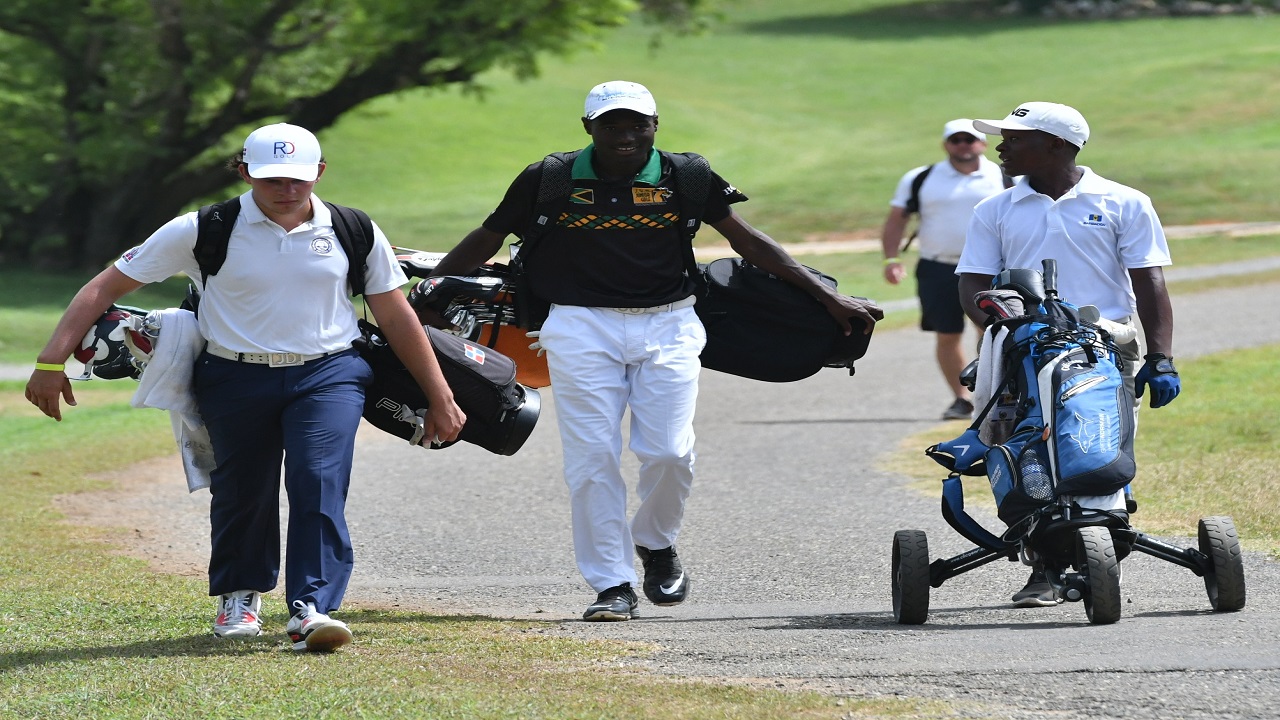 Juan Delgado of Dominican Republic (left) Sebert Walker Jr (centre) of Jamaica and Xavier Wiggins of Barbados heading out during the opening day of the 2018 Caribbean Amateur Junior Golf Championship at Caymanas Golf Club in St Catherine on Wednesday.

Jamaica had a good opening day at the 2018 Caribbean Amateur Junior Golf Championship at Caymanas Golf Club in St Catherine on Wednesday.

At the end of the day, Jamaica scored 43 points in the team's standings to hold down joint second place with Dominican Republic, with both countries five points behind leaders and defending champions Puerto Rico, on 48 points.

Trinidad & Tobago are fourth place with 34 points followed by Bahamas (29 points) and Barbados (25).

Jamaica featured in the top five positions in all six age-group categories and the team is sitting at the top of the leaderboard in the boys' 18 and under category with Sebert Walker Jr. scoring an even par 72.

Walker leads five other golfers, who are tied for second, including fellow Jamaican Justin Burrowes, all shooting four under par 76.

The other golfers in second place are Juan Delgafo and Gustavo Betances of Dominican Republic and brothers Melvin and Antonio Morales of Puerto Rico.

On the girls' side, Jamaica's Kei Harris holds down second position on 76 behind Puerto Rico's Valeria Pacheco with a score of three over par or 76.  Maria Sanchez of Dominican Republic is tied with Kai Harris.

The 15 and under category is the only one with under par scores.  Aaron Jarvis (two under par - 70) of the Cayman Islands and Diego Saavedra (one under par 71) of Puerto Rico are the two under par golfers.  Julio Rios of Dominican Republic is on 74, while the best-placed Jamaican is Michael Lowe in fourth position with 75.

Emily Odwin of Puerto Rico is leading the girls' section with four under par 76.  The top Jamaican in the category is Eryn Blakely, who posted a score of 11 over par 83.

Chris Richards  (75) of Trinidad and Tobago is atop the 13 and under leaderboard by just one stroke ahead of Jamaica's Rocco Lopez (76).

Jamaica's Emily Mayne with 85 holds down third spot behind Darianys Guzman of Barbados on 78 and Holy McLean of the Cayman Islands 83 in the girls' 13 and under category. Turks and Caicos, with one golfer in the championship - Kurt Rivers in the 15 and under category is in fifth position with a score of nine under par 81.

The competitors return to the course on Thursday for the second round. The first Jamaican on the course will be Justin Burrowes, who tees off at  8:40 am .